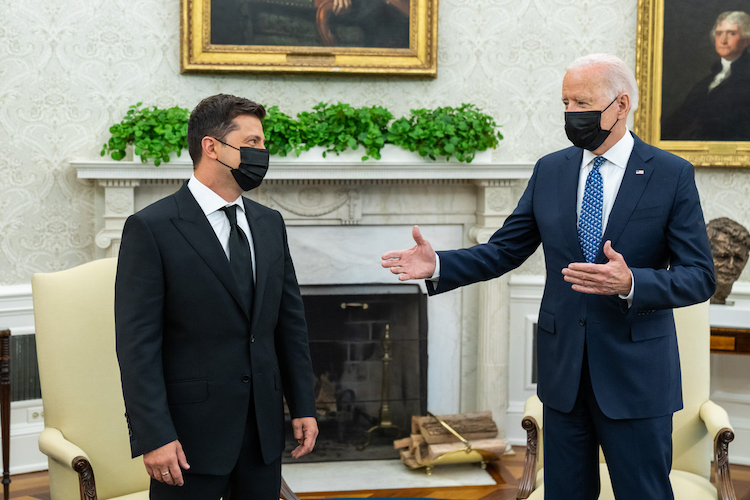 The recent summit between Presidents Joe Biden and Volodymyr Zelensky at the White House demonstrated that Washington and Kiev are ready to cooperate, despite some unresolved issues, including Ukraine’s aspiration to join NATO and the future of Nord Stream II. In the context of Russian aggression, these issues could pose a serious threat to European security.

The first official meeting between the American president Joe biden and his Ukrainian counterpart, Volodymyr Zelensky, took place on September 1. The date has been postponed several times for a number of reasons. Initially, Kiev had requested that the meeting take place before the June 16 Biden summit with Vladimir Putin in Geneva, but during a telephone conversation the US president suggested that Zelensky visit Washington in July. Then the meeting was set for August 31, but that date coincided with the deadline. together by the Taliban to withdraw US and foreign troops from Afghanistan. As a result, the Biden-Zelensky meeting was again postponed for one day.

Even before the Biden-Poutine summit in Geneva, Zelensky noted that he would like to hear a clear â€œyesâ€ or â€œnoâ€ from the US president on the action plan for Ukraine’s NATO membership. The same question was raised during Biden’s post-summit press conference, at which he responded that everything depends on Ukraine, because it needed to root out endemic corruption and meet other criteria before it could join. He also added that Alliance member countries will have to be convinced, and that is not going to be easy. Most likely, this statement is supported by Washington’s attempt to transfer responsibility for Ukraine’s European integration and its subsequent NATO membership to the EU.

Lately, Zelensky’s team has come under heavy criticism, both at home and abroad, for deviating from the pro-Western course. For example, on April 28, the Ukrainian president sacked Andrei Kobolev, chairman of the board of Naftogaz Ukraine, the country’s largest national oil and gas company, who had held the post since 2014. According to in Zelensky, the decision was taken due to the company’s losses amounting to 11 billion hryvnia ($ 420 million) in 2020. However, this decision was critically received in Washington, as it undermines the business principles of managing state-owned enterprises, which have long been cultivated in Ukraine by Western partners. In May, during his official visit to Kiev, the US Secretary of State Anthony blinken called the change of management of the company “a bad signal” that could damage the international image of Ukraine. Early July Blinken sent yet another signal to Kiev, noting that Ukraine is losing about 30 percent of GDP, i.e. around 40 billion dollars, because of corruption.

In response to these signals, at the Washington summit, Zelensky presented his plans to transform Ukraine, which includes more than 80 projects with a total value of $ 277 billion aiming to make the country “an outpost of security, as well as a digital, infrastructural and agrarian pole”. It was also crucial for Zelensky to obtain security guarantees from the United States and communicate it to the Ukrainian public. Overall, this task was successful. During the meeting with his Ukrainian colleague in the White House, Biden again highlighted that “the United States remains firmly committed to the sovereignty and territorial integrity of Ukraine in the face of Russian aggression and …[s] Ukraine’s Euro-Atlantic aspirations. The US administration is also in the process of “revitalizing” the Strategic Partnership Commission between the two nations and allocates an additional sum $ 60 million for military aid from Ukraine. According to a joint statement after the meeting, the United States “does not and will never recognize the alleged annexation of Crimea by Russia and reaffirms its full support for international efforts, including in the Normandy format, aimed at negotiating a diplomatic resolution of the directed conflict. by Russia in eastern Ukraine the basis of international law.

Despite the positive rhetoric, questions that directly affect Ukraine’s security, such as the future of Nord Stream II or NATO membership, remain unanswered.

The subject of Russia’s aggression against Ukraine was also discussed in a different context. The construction of the Nord Stream II gas pipeline, a joint project of Russian Gazprom and German Wintershall and Uniper, as well as Royal Dutch Shell (Netherlands / Great Britain), ENGIE (France) and OMV (Austria), was the one of the key topics. In May, the Biden administration decided not to extend sanctions associated with the pipeline, putting Ukraine at risk of significant financial losses – on $ 1.5 billion in transit charges for the transport of Russian gas to Europe. Moreover, according to some estimates, the launch of Nord Stream II could lead to higher gas prices for Ukrainian residents and additional losses amounting to approximately 2-3 billion dollars.

Experts and politicians underline political threats posed by the new pipeline over economic threats, since Moscow will use it to blackmail Kiev, for example by refusing to extend the current contract on the transit of Russian gas after 2024 (the agreement allows the transit of about 55 billion cubic meters per year, which is comparable to the capacity of Nord Stream II). Earlier, Putin declared that for the contract to be extended, Kiev must show “good will”, which suggests that the issue goes beyond a purely economic interest.

On September 10, just a few days after the Biden-Zelensky meeting, Gazprom announcement that the construction of Nord Stream II was completed. If launched, the project will violate the nihil de nobis sine nobis (â€œNothing about us without usâ€), a key principle of the Ukrainian government (which means that decisions of this type must be taken with the participation of Ukraine). This is causing serious concern in Kiev, especially considering the Russian military build-up on the Ukrainian border during the Zapad-2021 exercises.

Overall, the Biden-Zelensky summit showed that the two countries are determined to continue their cooperation, but the White House’s concerns about the Ukrainian government remain the same: Kiev must continue to fight corruption and do its ” duties’ when it comes to implementing reforms, including the adoption of the proposal law on “desoligarchization”. Despite the positive rhetoric, questions that directly affect Ukraine’s security, such as the future of Nord Stream II or NATO membership, remain unanswered. Soon they will likely become crucial to Ukrainian and European security, which will determine the course of US-Ukrainian relations for many years to come.

Mykola Vorobiev is a Ukrainian journalist and visiting scholar at Johns Hopkins University.