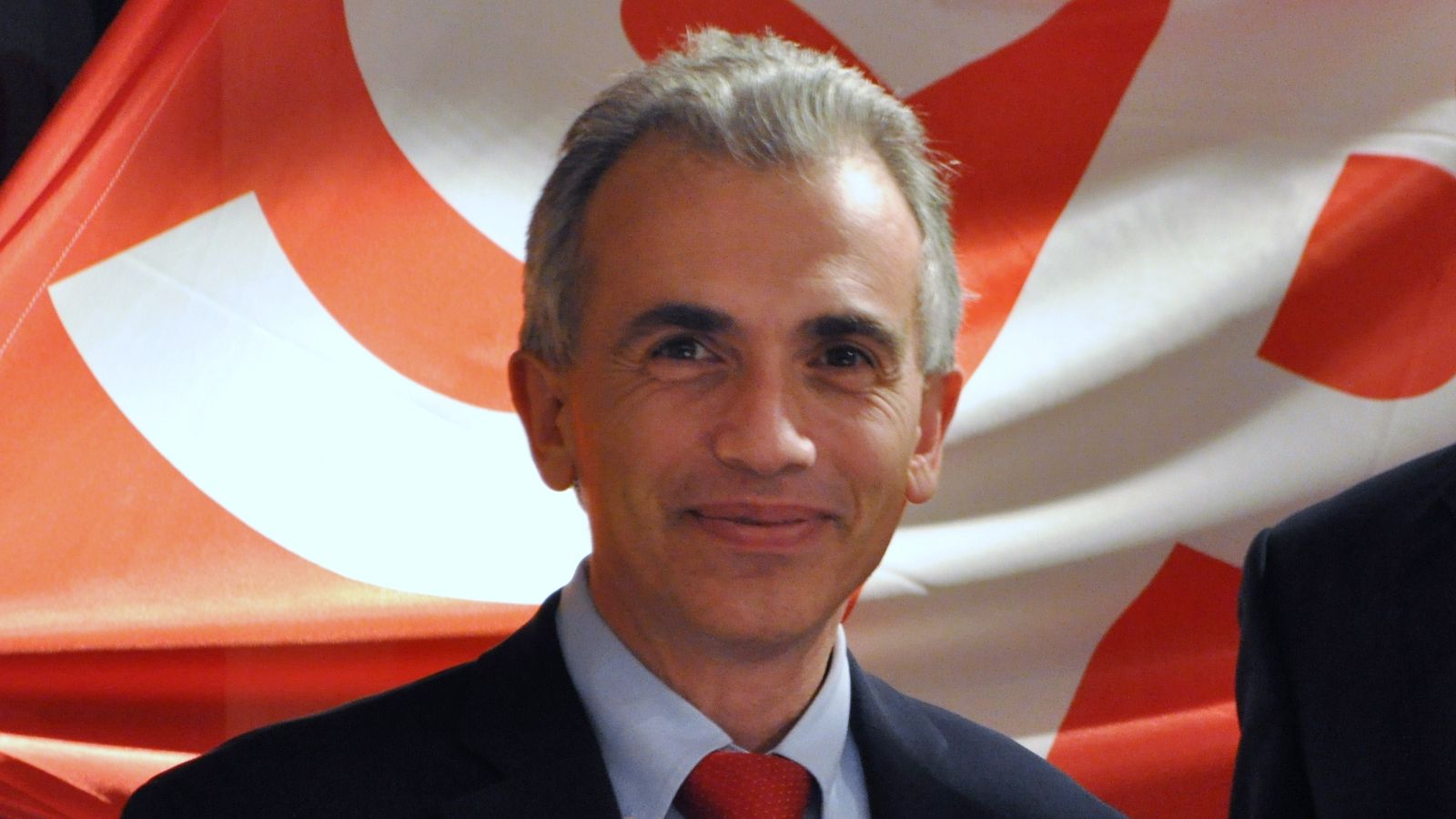 Last Friday was the last working day for Frankfurt German Mayor Peter Feldmann (Social Democratic Party, SPD). In a referendum on November 6, 95.1% of participating voters voted in favor of his impeachment. The necessary quorum of 30% of all eligible voters (152,455 votes) was more than met.

More than 200,000 Frankfurt voters submitted ballots to remove Feldmann from the town hall. The impetus for this dismissal was Feldmann’s personal involvement in the corruption scandal involving Arbeiterwohlfahrt (Association of Welfare Workers, aka Awo), which brazenly raised funds at taxpayer expense. The ongoing lawsuits against Feldmann are just the tip of a multi-million dollar corruption iceberg.

In March, the prosecution filed a complaint against Feldmann for profiting from his office. The charges are based on the fact that his then-girlfriend and later wife were hired as the head of an Awo daycare center “for no objective reason”, received an unusually high salary and were granted a car. function. During the 2018 election campaign, the Awo also solicited donations for Feldmann, who, as town leader, “benevolently considered” the association’s interests in return.

Amid the ongoing court case, Feldmann’s impeachment in Sunday’s vote was prompted by a ‘broad alliance’ of the Greens, Christian Democrats (CDU), Liberals (FDP), Volt Party as well as of the SPD. The Left Party, the influential trade union IG Metall and the “left” Greens Jutta Ditfurth (ÖkoLinX – Ecological Left) opposed the referendum.

IG Metall Frankfurt’s top representative, Michael Erhardt (Left Party), said: “We trade unions have nothing to gain if he is no longer mayor. Nobody represents our subjects so strongly… Affordable housing, cheap public transport, free childcare. Who will do it?

This hypocritical and self-serving claim is based on two factors: Feldmann’s humble origins and his rise in social democratic networks, including IG Metall.

Peter Feldmann, born in 1958, spent his youth in Bonames Tower north of Frankfurt and graduated from the Ernst Reuter School. He then trained as a gardener in Israel before beginning his studies in political science in Marburg. At the age of nine he joined the youth organization SJD-The Falcons, at 18 he became a member of the youth organization SPD Young Socialists (Juso), at 30 he became president of Juso with a seat on the Frankfurt City Council.

He owes his ascent to the town hall only to the protection of the SPD and the Awo, which regularly offer him new appointments: sometimes at the head of a youth center or a home for the elderly, sometimes as adviser or in a specially created “staff post”. to prepare for his election campaign. Ten years ago, in March 2012, he won his electoral campaign with great promises: “Against child poverty and the housing shortage, for a liberal and cosmopolitan city”, etc. .

By this time, however, the era of reformism was long over. Seven years earlier, the German federal government was an SPD-Green coalition led by Chancellor Gerhard Schröder and Joschka Fischer. With Agenda 2010 and the Hartz IV social protection programs, this government set in motion the development of a new low-wage sector, initiated large-scale privatization and presided over the impoverishment of the working class. Frankfurt, the metropolis on the Main River, was no exception.

At the airport, dismissed ground workers even started a hunger strike against the service company WISAG. His godfather, Claus Wisser, a multi-millionaire and member of the SPD, has been a close friend and confidant of Feldmann since the days of Juso. Feldmann invited Wisser to his wedding and his 60th birthday and, conversely, congratulated Wisser on his eightieth birthday in June 2022.

Peter Feldmann has also proven to be a right-wing politician and warmonger. From day one of the imperialist proxy war against Russia in Ukraine, he has stood firmly with the government and especially his party friend, Chancellor Olaf Scholz. It wholeheartedly supports its aggressive militarism, rearmament and arms deliveries to kyiv.

In September, Feldmann single-handedly launched an urban partnership with Kyiv. Against a resolution of the city council, during a meeting in Prague, Feldmann presented to his counterpart, the mayor of kyiv Vitali Klitschko, a project for a municipal partnership with Frankfurt. Feldmann commented: “Ukraine can count on us.

The Awo scandal played a central role in Feldmann’s social and political degeneration.

The Arbeiterwohlfahrt– founded 100 years ago as a social-democratic workers’ self-help organization – has long since transformed itself into a bureaucratic monster for capitalist enrichment. Its residences for the elderly, crèches, youth centres, listening centres, refuges for refugees, etc., are today almost entirely financed by government subsidies, that is to say by tax revenues. In addition to tens of thousands of volunteers, the association employs around 230,000 full-time people, most of them poorly paid.

The Awo owes its lucrative contracts to the fact that the State is increasingly withdrawing from its social obligations in favor of “non-profit” associations, thus weakening the very status of association. For the past thirty years, the Awo, alongside the SPD and the unions, has increasingly degenerated into a self-service store for careerists and profiteers.

In southern Hesse, directors Awo Jürgen and Hannelore Richter hit the jackpot by successfully elevating their protege Feldmann to the post of mayor. This gave them the necessary backing from the city for increasingly large, barely accountable contracts. Since then, the Richters and other Awo officials have spent nearly four years in court over massively inflated executive salaries, false accounting, expensive company cars, dodgy consultancy contracts, and more.

Especially since thousands of refugees arrived in Germany in 2015 and Frankfurt needed new accommodation at short notice, the word was: “Oh yes, the city pays”. For security alone, more than 7 million euros would have flowed from the coffers of the city via the new Awo project.

Millions more were invested in (bad) catering, (imaginary) sports lessons and the conclusion of real estate and consultancy contracts. Eventually, Awo’s demands became so brazen that the city pulled the cord in 2018 and terminated the contracts. Shortly after, scandal broke with the first corruption trial.

The text messages from the general managers of Awo to their “friend”, the mayor, which are now part of the indictment against Feldmann, date from this time. For example, Hannelore Richter, general manager of the Wiesbaden Awo district association, wrote to her: “You can always count on our support and loyalty, now we count on you. Other texts read: “Dear Peter, we/I need your help” or simply: “Quid pro quo” (loosely translated: “One hand washes the other”).

According to the prosecution, Feldmann’s future wife, Zübeide Temiziel, also owes her lucrative job as the director of a German-Turkish daycare center solely to her husband’s office and his connections with Awo. The indictment says Feldmann introduced his then-partner to the Richters in the spring of 2014. “Here’s our boss!” Hannelore Richter exclaimed, and in a restaurant later promised Temiziel the well-endowed €4,500-a-month position for which Temiziel, then still a student, was not at all qualified.

To this day, Feldmann dismisses all accusations with the assertion, “I’m not corrupt.” On Sunday, the freshly ousted mayor claimed it was not about the pageantry of office for him, but rather “more than anything about social issues”. By then, however, there was hardly anyone left to defend him: only 4.9% of the votes cast were against his ouster.

The few people who still supported Feldmann, such as Ditfurth of the ecological left and Erhardt, head of IG Metall, argue that the corrupt SPD could be followed by an even more right-wing, even more corrupt, or even worse CDU or FDP mayor. They conceal the fact that it is precisely their repugnant bureaucratic swamp that prepares the way for the most right-wing forces – precisely because they themselves are part of the same swamp.

When it came to job cuts, wages and jobs, the federal and state governments, whether led by the CDU, the SPD or the Greens and the Left Party, could always count on help and union support. The fact that IG Metall, the Left Party and ÖkoLinX now support the corrupt Feldmann shows that they are bitter enemies of the only force that can bring about real change: the socialist working class.