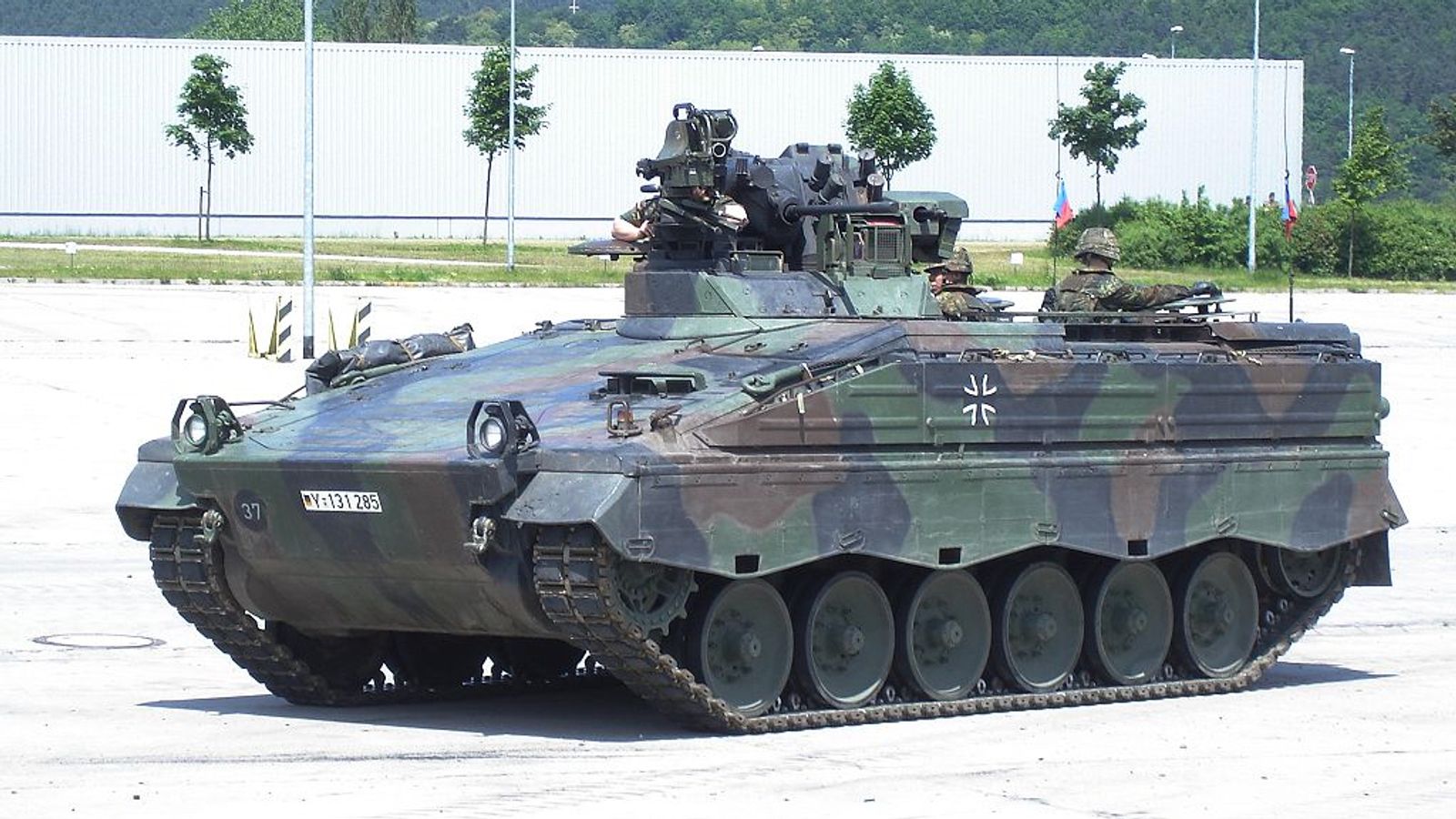 A week ago, German Chancellor Olaf Scholz (Social Democrat, SPD) made his inaugural visit to Athens where he met Greek Prime Minister Kyriakos Mitsotakis of the right-wing conservative Nea Dimokratia (ND) party. The talks, which took place against the backdrop of the proxy war between NATO and Russia in Ukraine, focused on closer cooperation between the two countries in defense and energy policies. “In both areas, Greece could play a leading role in the future,” commented the TV news. Tagesschau.

The previous week, the first six German Marder tanks out of a total of 40 had arrived in Greece as part of the so-called “backfilling arrangements” to arm Ukraine. This involves Berlin supplying state-of-the-art weaponry to European states, which in turn send Soviet-style weapons to Ukraine. Athens has handed over 40 former BMP-1 infantry fighting vehicles from stockpiles in the former German Democratic Republic (GDR) to kyiv.

The “traffic light” coalition of the SPD, Liberal Democrats (FDP) and Greens is using the Ukraine war for a global arms offensive. Under the slogan “the turning of the times”, it massively increased military spending and supplied arms and other materials to Ukraine. Since the spring, he has also been arranging “alternative arrangements” with other countries, which in addition to arming Ukraine allow him to push German arms deals throughout Europe.

Mitsotakis announced that the new Marder tanks will be stationed along the Evros River on the border with neighboring Turkey, of all places. “Our forces are working on the assumption that they will be most useful there,” he said, explaining the provocative move. Geopolitical tensions between NATO allies Turkey and Greece have further escalated with the war in Ukraine. Mutual threats and nationalist war rhetoric serve both sides to divert attention from the grave social crisis in the country.

Scholz gave the Greek government no direction as to where the tanks could be stationed. Even before his visit, he had supported Greece in an interview with the Greek daily Your Nea and criticized Turkey’s “military threats”. At the press conference in Athens, he kept a lower profile and called for “a dialogue based on international law”. For his part, Turkish President Recep Tayyip Erdoğan considers the interests of his regime to be threatened by the armament in Greece and calls for the demilitarization of the Aegean islands.

On October 28, the new German Marder tanks were displayed in the annual military parade marking the so-called Ochi Day. Greece’s National Day commemorates October 28, 1940, when the pro-Hitler dictatorship of Metaxas rejected an ultimatum from fascist Italy under Mussolini and called for national resistance.

The Greek ruling class often uses this holiday as an opportunity for nationalist propaganda. Chief of General Staff Konstantinos Floros addressed an open threat to Turkey in his speech ahead of the parade. As in 1940, he said, the “powerful” armed forces stood ready to silence anyone who “threatens, insults, derides or belittles” Greece.

These remarks by the highest military officers must also be understood as a warning to opponents of the internal war, who denounce chauvinistic patriotism and gigantic military expenditure at the expense of the education and health systems. Not so long ago, the working class was crushed under the yoke of the Greek military dictatorship (1967-1974).

In terms of energy policy, Greece could become a “more important hub for Europe” after the Russian gas supply is cut off, said Professor Kostas Lavdas, a political scientist at Panteion University in Athens. Tagesschau. He also mentioned the Eastmed gas pipeline project, which was currently not on the table, but which was “put back in reach due to the war in Ukraine”. The gas pipeline, which has not yet been built, is intended to transport natural gas and hydrogen from the Middle East to Greece and from there to Italy.

The port of Alexandroupoli in northern Greece, which was recently expanded and serves as a transshipment point for NATO arms deliveries to Ukraine, is also becoming more important in the energy sector. , according Tagesschau“Via the Southern Gas Corridor – an interconnection of several gas pipelines – gas arrives in Greece from Azerbaijan via Georgia and Turkey. From Alexandroupoli, in turn, the Trans-Adriatic Gas Pipeline passes through Albania to Italy.

Additionally, a liquefied natural gas (LNG) terminal is being built in the port, which could supply the Balkan countries. German and European companies are also investing in wind and solar energy.

Greece is one of the closest allies of the United States and Germany in the war against Russia. Even before the outbreak of war, it was spending 3.59% of its GDP on its military apparatus – more than any other NATO country – according to NATO figures in 2021. Military spending has risen to around 8 billion in 2021, up from $5.3 billion the previous year, according to figures from the peace research institute Sipri.

Greek rearmament enjoys the full support of the pseudo-left opposition party Syriza, which wants to distinguish itself as a better defense partner. A few days ago, party leader Alexis Tsipras met with officials from the Greek aerospace industry and welcomed the success of the “two armament programs that we carried out as a government under very challenges: upgrading 84 F-16 Viper fighters and four P-3 maritime reconnaissance aircraft.

He then complained that of the latest arms programs under the ND government, “not a single euro has gone to the national arms industry. It is a national crime. Greece, he said, “must always keep its armed forces as a deterrent and constantly ready”. If Syriza came to power, it would renegotiate contracts and strengthen the Greek defense industry, Tsipras said.

In recent months in particular, Washington has accelerated the expansion of military bases and the modernization of the Greek army. In September, the US government’s plan to station forces in the port of Alexandroupoli became public knowledge.

In a meeting on October 11, deputies from the two defense ministries discussed “expanding the US military presence in Souda Bay and elsewhere in Greece” and “providing resilient access to the eastern flank of NATO, in particular to help Ukraine,” according to a US Department of Defense. Press release.

The German defense industry does not want to leave empty-handed in this development. According to Sipri data, tiny Greece was already the fifth largest buyer of German arms exports between 2011 and March 2022 (after South Korea, the United States, Egypt and Israel). Berlin is trying to rapidly expand the power position of German imperialism, also in competition with the United States and France.

The current intensification of armaments collaboration with Greece shows once again the criminal traditions in which German great power politics is today embedded. Landfill arrangements are made by the same companies that were industrial leaders during the Nazi era.

Marder tanks are produced by Düsseldorf-based arms giant Rheinmetall, which saw record sales in the first half of 2022. As early as the mid-1930s, Rheinmetall-Borsig was heavily involved in secret arms deals between Greece and Nazi Germany.

Greece’s then Minister of War, General Kondylis, contacted Rheinmetall-Borsig in 1934 and “presented the company with a long shopping list”, according to historian Morgens Pelt, in an available essay on line (in German). The negotiations took place in secret because Greece did not want to alienate the Entente’s allies, France and Britain; and Germany was not allowed to export war material after World War I due to the Treaty of Versailles.

Because of these restrictions, Rheinmetall-Borsig set up a shadow company, Waffenfabrik Solothurn in Switzerland, which entered into arms deals with several countries, including Greece, Italy and Bulgaria. Rheinmetall-Borsig was closely linked to the Nazi government. The president of its arms and sales headquarters, Major Waldemar Pabst, had ordered the assassination of the revolutionaries Rosa Luxemburg and Karl Liebknecht in 1919 and enjoyed the confidence of the Nazi leaders. According to Pelt, Nazi Germany also viewed arms shipments to Greece as a welcome opportunity “to undermine the French security system in Central and Southeastern Europe”.

On August 4, 1936, following the suppression of a major strike by tobacco workers in northern Greece, the fascist and monarchist general Ioannis Metaxas established a dictatorship. As a result, he intensified arms deals with Rheinmetall-Borsig and increased dependence on German war material and weapons technologies. From the perspective of Hitler’s Foreign Office, the arms deliveries were “an essential element for the protection of German interests in Greece”, according to Pelt.

After the Italian attack on Greece, which was initially repelled, the Nazis occupied the country in the spring of 1941 and carried out a campaign of extermination against the civilian population, the Jewish community and the partisan movement. The plunder of economic resources (including chrome and nickel) benefited the German industrial machine.

Rheinmetall also took advantage of this theft policy; Greek forced laborers were forced to work hard in German armaments factories. The former director of Rheinmetall-Borsig in Athens, Walter Deter, became a member of the economic staff of the Wehrmacht, Hitler’s armed forces, in Greece.

More recently, Rheinmetall has reaped big profits in Greece via shady bribery deals. Between 2001 and 2011, the group had paid at least 42 million euros in bribes to Greek intermediaries to set up arms contracts (mainly air defense systems and Leopard tanks). When the scandal broke in 2014, the company had to pay around 37 million euros in fines.

Now, under the leadership of the Scholz government, German arms companies are formally making huge deals with Greece and other countries and are firmly integrated into Germany’s self-interest policy in the south-east of Europe.

In the process, the latest “alternative arrangements” with Athens have not only intensified the NATO proxy war against Russia in Ukraine, but also the danger of another devastating war between Greece and Turkey. This escalation of war can only be stopped if workers in Turkey, Greece and around the world unite in an international and socialist anti-war movement.