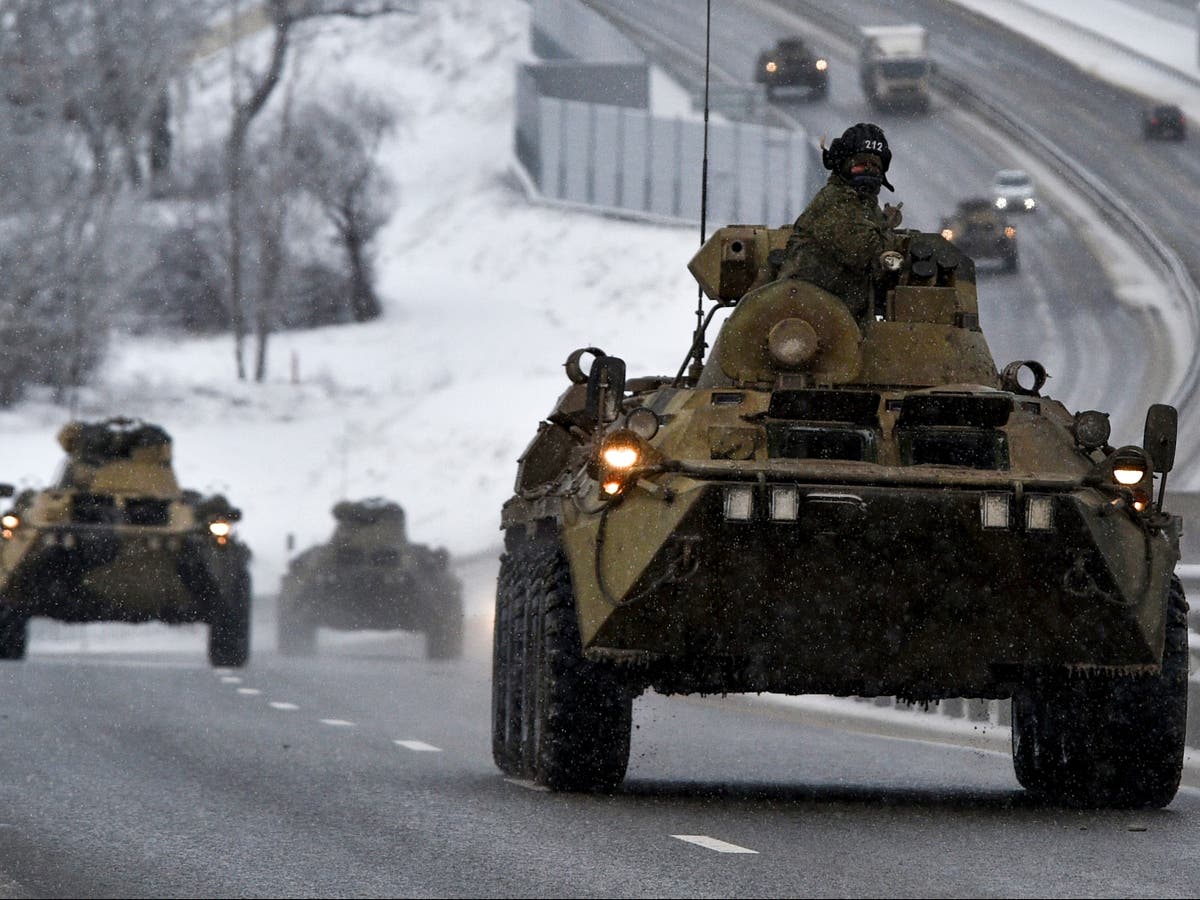 Tensions continue to rise along the border between Russia and Ukraine, where Moscow has reinforced its military presence, estimated at around 106,000 soldiers.

Russian President Vladimir Putin has denied plans to invade the neighboring state, but presented a series of demands to the West, including an end to the eastern expansion of NATO membership to states ex-Soviets and the reduction in the military activity of the United States and NATO. at the gates of Russia.

NATO said it was sending additional ships and fighter jets for its deployments in Eastern Europe, while the United States and the United Kingdom were pulling diplomats’ families out of Ukraine.

Moscow has moved troops and equipment to neighboring Belarus for military exercises, and Washington plans to send thousands of American troops to NATO allies in the Baltics and Eastern Europe, according to media reports.

Meanwhile, Mr Putin has been warned not to even consider crossing the border with Ukraine by his US counterpart Joe Biden.

“I have been absolutely clear with President Putin,” Mr Biden said last week. “There is no misunderstanding. If assembled Russian units cross the Ukrainian border, it is an invasion. Let there be no doubt that if Putin makes this choice, Russia will pay a heavy price.

Scandal-hit British Prime Minister Boris Johnson also warned that any action by the Kremlin against his neighbor would be “a disaster not just for Russia, it would be a disaster for the world” and said that “the UK strongly supports sovereignty and integrity.” of Ukraine”.

US Secretary of State Anthony Blinken meanwhile met his Russian counterpart Sergei Lavrov in Geneva last week for urgent talks on the situation, having previously met with Ukrainian President Volodymyr Zelensky in Kyiv and NATO leaders in Berlin.

While Mr. Blinken warned of renewed Cold War tensions and a return to “dangerous and unstable times”, Mr. Lavrov’s deputy, Sergei Ryabkov, played tough in Moscow, saying: “We we are not afraid of anyone, not even the United States.”

Once the talks were over, Mr Blinken warned that the United States and its allies would provide a “swift, stern and united response” if Russia attacked Ukraine.

The issue of Ukraine’s exclusion from NATO has been a longtime obsession for Mr Putin, who bitterly recalls the aftermath of the collapse of the Soviet Union under his predecessor Boris Yeltsin in the 1990s as a “decade of humiliation” in which Bill Clinton’s United States “imposed its vision of order on Europe (including Kosovo in 1999) while the Russians could only stay arms crossed, according to diplomatic relations expert James Goldgeier.

Mr. Yeltsin wrote to Mr. Clinton in September 1993, expressing similar concerns, saying: “We understand, of course, that any eventual integration of Eastern European countries into NATO will not automatically lead to this that the alliance will somehow turn against Russia, but it is important to consider how our public opinion might react to this step.

To address these concerns, the NATO-Russia Founding Act was signed in 1997, a political agreement stating explicitly that: “NATO and Russia do not consider each other as adversaries”.

The formation of the NATO-Russia Council followed in 2002.

But Mr Putin would nonetheless regret what he sees as the alliance’s gradual eastward expansion, which saw ex-Soviet satellites Czech Republic, Hungary and Poland join in 1999, followed by Bulgaria, l Estonia, Latvia, Lithuania, Romania, Slovakia and Slovenia in 2004.

He chooses to interpret the recruitment from these nations as the US breaking a promise allegedly made by his then-Secretary of State James Baker to Mikhail Gorbachev during a visit to Moscow in February. 1990 to discuss German reunification after the fall of the Berlin Wall.

“There would be no extension of NATO jurisdiction for NATO forces one inch to the east,” Baker said. supposed to have engaged to Mr. Gorbachev, according to Russian officials, although the quote is strongly disputed and the latter denied the subject had ever come up in an October 2014 interview with the Kommersant newspaper.

Since then, Mr Putin has harbored a grudge, no doubt keen to foster anti-Western sentiment at home and shore up his power base, and has firmly opposed Georgia and Ukraine joining the the covenant.

“Obviously NATO enlargement has nothing to do with modernizing the alliance itself or with ensuring security in Europe,” he told the Munich conference. on security in 2007. “On the contrary, it represents a serious provocation which reduces the level of mutual trust.

The following April, at a NATO summit in Bucharest, he was even more categorical: “No Russian leader could stand idly by in the face of steps towards Ukraine’s NATO membership. It would be a hostile act towards Russia.

For its part, NATO official position The fact remains that “a sovereign, independent and stable Ukraine, firmly committed to democracy and the rule of law, is the key to Euro-Atlantic security”.

He points out that his associations with the country date back to the disintegration of the USSR and that cooperation had to be intensified in light of Russia’s regional aggression in 2014, when it annexed the Crimean peninsula and supported a separatist insurgency. after Putin’s ouster. ally Viktor Yanukovych, a fight that claimed 14,000 lives in the years that followed.

For the United States, Ukraine’s path to NATO membership is less clear.

Mr. Blinken told the Senate Foreign Relations Committee no later than June 8, 2021 that “we support Ukraine’s accession to NATO” but his deputy, Wendy Sherman, was more wary when she addressed the issue on Wednesday, saying only: “Together, the United States and our NATO allies have made it clear that we will not walk out. to NATO’s open door policy – a policy that has always been at the heart of the NATO alliance.

Mr Biden, the former top Democrat and later chairman of that same committee, had previously believed that the transformation of former Soviet republics into NATO allies marked “the start of another 50 years of peace”, but has since tipped toward skepticism about US involvement in distant lands. “Forever Wars”, hence the hasty withdrawal from Afghanistan last summer after 20 years of peaceful occupation.

He is also known to be determined to see political and judicial corruption eradicated in Ukraine and reluctant to further provoke the Russian bear, having lived much of his life in an era of mutually assured destruction, especially since the security threat posed by China is a current priority that cannot be ignored.

If Ukraine is not part of the alliance, the United States and NATO are not bound by treaty to come to its aid in the event of a Russian attack, while these security guarantees are extended to the Baltic States neighbors like Estonia, Latvia and Lithuania since they signed the 2004 enthronement.

All three could become potential future targets for Russian annexation, moreover, if the current aggressions are allowed to continue unchecked and leave Mr. Putin feeling emboldened.

That said, Mr. Biden’s saber rhetoric strongly suggests that he is ready to step in in some form, even if that doesn’t mean American boots on the ground.

The United States provided Ukraine with $200 million in defensive military aid on Wednesday (and has given $2.5 billion since 2014) while the Pentagon said it already has 200 National Guard troops stationed in the country.

If it were to offer more direct defensive assets, the United States would be able to provide Ukraine with a wide range of assistance free of charge, ranging from air defense, anti-tank and anti-ship systems, electronic warfare systems and from cyber defense to supplies of small arms and artillery ammunition.

“The key to thwarting Russian ambitions is to prevent Moscow from having a quick victory and increasing the economic, political and military costs by imposing economic sanctions, ensuring political isolation from the West and evoking the prospect of a protracted insurgency that draws away the Russian military,” Seth Jones and Philip Wasielewski wrote in an analysis of the situation for the Center for Strategic and International Studies last week.

But the only man who really knows what will happen next is Mr. Putin.

World warns Vladmir Putin to step back from ‘violent’ invasion of Ukraine as US prepares to send 50,000 troops