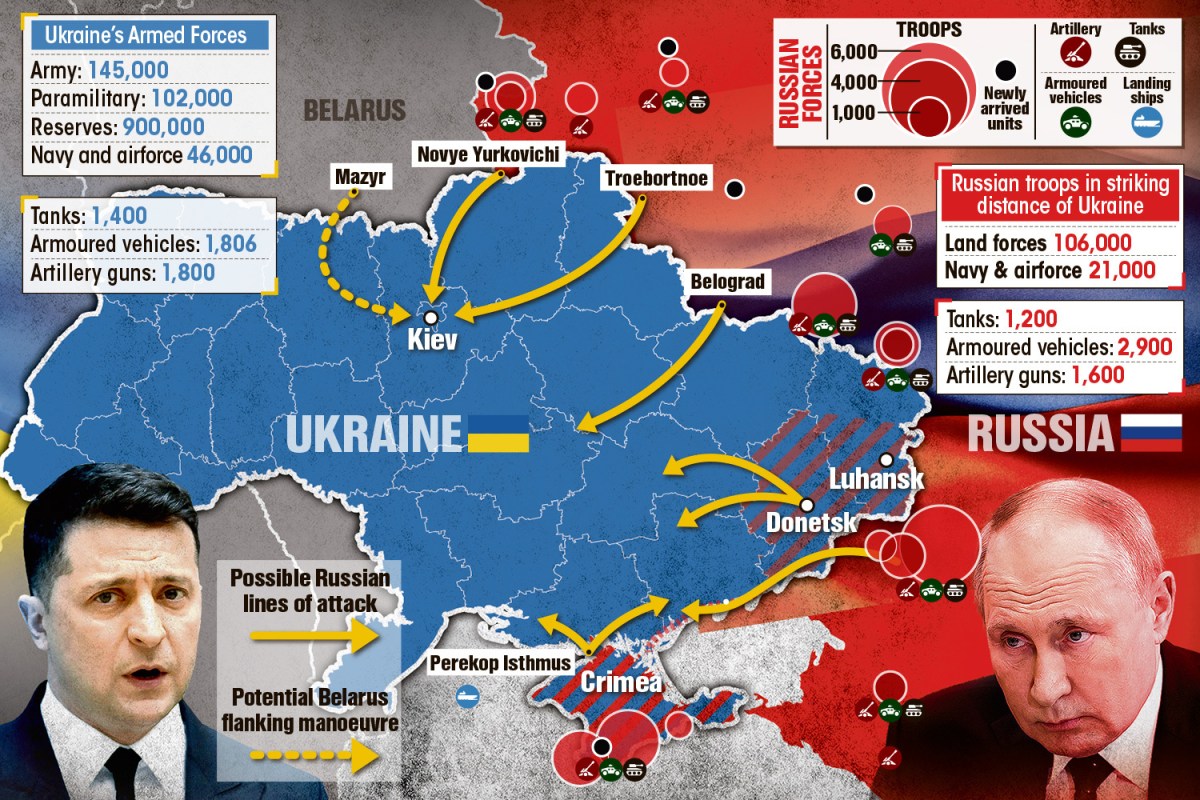 World warns Vladmir Putin to step back from ‘violent’ invasion of Ukraine as US prepares to send 50,000 troops

BORIS Johnson last night urged President Putin to step back from the brink of a ‘painful, violent and bloody’ invasion of Ukraine.

The prime minister warned of Russian plans for a “lightning war” that could wipe out the capital Kiev.

NATO has ordered fighter jets and battleships to the conflict zone as President Joe Biden plans to rush up to 50,000 US troops to Eastern Europe to stop a bloodbath.

Ominous fears of World War III skyrocketed as the UK and US ordered diplomatic staff out of Kiev amid fears of a terrifying superpower escalation.

Last night the PM held a frantic late night crisis call with the heads of the US, France, Germany, Poland and NATO to discuss the deteriorating situation – but stressed that war was not yet inevitable.

Writing in The Sun today, Defense Minister James Heappey warns that there are already figures linked to the Russian military in Ukraine.

But he says Britain fully supports Ukraine in the same way it supported Poland in World War Two, and claims the Prime Minister has sent them ‘more than just warm words’.

Boris has ruled out sending British combat troops but will provide military support to Ukraine and back a crushing series of Western economic sanctions against Russia.

And Mr. Heappey said: “To be British is to come to the aid of others and to defend those who cannot defend themselves. That’s why we went to the aid of Poland in 1939.

“Ukraine needs our help. That’s why the Prime Minister took the decision to send them more than just warm words.

🔵 Read our Live Blog Russia Ukraine for the latest updates

Putin has 127,000 troops, tanks, artillery and missile batteries, as well as warplanes and drones ringing the border with his pro-Western neighbor after peace talks collapsed.

He hopes a whirlwind win will bring him home after being dogged by a sluggish economy and Covid woes.

Military sources say another 30 troop trains have poured into Ukraine’s pro-Putin neighbor Belarus in recent days – and another 200 could follow.

The move – allegedly intended for “military exercises” in Belarus – sparked alarm in Kiev, just 100 miles from the Belarusian border.

It came amid fears a dispute could push already record gas prices even higher if Russia cut off access to Europe.

The prime minister fired his harshest salvo yet at ruthless strongman Putin, warning that any advance in Ukraine would be met with force and crippling economic sanctions.

The Prime Minister insisted that “common sense can always prevail” despite grim intelligence, but any war can be “the new Chechnya” because Ukrainians will not give in without a fight.

He told reporters: “There are 60 Russian battlegroups on the borders of Ukraine.

The plan for a blitzkrieg that could wipe out Kiev is one that everyone can see.

“We have to say very clearly to the Kremlin, to Russia, that this would be a disastrous step. Invading Ukraine, from the Russian point of view, is going to be a painful, violent and bloody undertaking.

“And I think people in Russia need to understand that this could be their new Chechnya.”

Russia tried to take over Chechnya in 1994 with overwhelming firepower – but lost around 14,000 soldiers in just 20 months in a brutal guerrilla war.

Analysts say Putin is now almost certain to launch a limited strike within the next ten days – which could include an attack on the Ukrainian capital’s three million residents.

Britain’s Foreign Office has said it is withdrawing around half of its staff and their families to Kyiv “in response to the growing threat from Russia” – but will remain open for essential business.

Washington ordered the diplomats’ families to leave, warning a Russian invasion could come “at any time” – but stressed it was not an evacuation.

The US State Department has also warned people not to travel to Ukraine or Russia.

Mr Biden was yesterday considering a dramatic tactical reversal after a failed speech last week in which he appeared to give the green light for a limited Russian invasion.

Pentagon sources said he plans to fly up to 50,000 troops, reinforced by battleships and warplanes, to Eastern Europe to counter any Russian offensive.

NATO said Denmark and Spain were also sending planes and ships to Eastern Europe – and France was considering sending more troops in a new campaign to confront bully Putin.

Russia retaliated by warning that it would “respond appropriately” to any US action and again denied that it planned to invade.

But the latest satellite images showed thousands of troops and military vehicles lined up around the border as camps and field hospitals were stocked with supplies.

Putin’s commanders are now waiting for a biting winter cold snap to freeze the ground and allow tanks to launch an offensive – as temperatures across Ukraine plunged to -8C last night.

But Ukrainian volunteers training in snowy parks in Kiev yesterday pledged to fight to their “last breath and bullet” in guerrilla warfare – and send thousands of body bags to Russia.

Foreign ministers met in Brussels and announced their intention to transfer £1 billion to Ukraine to fund its defensive efforts against Russia.

She warned Germany and other EU countries that they needed to wean themselves off Russian gas to really hit Moscow where it hurts.

The FTSE 100 lost £55bn yesterday as petrol prices soared amid growing tension between Russia and Ukraine.

London’s index of major stocks fell 2.6% to 7,297.15 on fears a dispute could derail the recovery from the pandemic.

Hargreaves Lansdown analyst Susannah Streeter said: “There are concerns that conflict on the fringes of Europe could disrupt the longer-term recovery.”

Goldman Sachs analysts have warned they could hit record highs if the dispute hits supply from Europe.