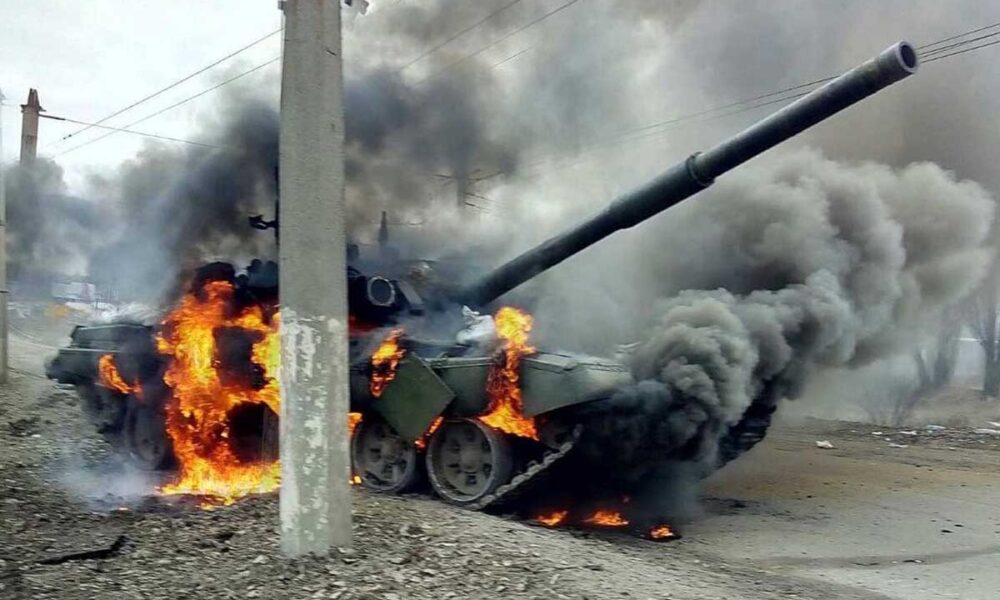 The West faces a unique opportunity to stop Russia. You have to take it

Last week, Russian President Vladimir Putin called Ukraine “aanti-Russian enclave” which should be removed. He also said that the Russian soldiers taking part in the military operation there were fighting for their “own country.” These statements have important implications.

For the past six-plus months, the Russian administration’s mantra has been that all offensive objectives will be achieved. By design, however, specific targets, such as the distance at which Moscow’s forces plan to enter Ukraine, have never been specified. This can only spark speculation about what the Kremlin actually hopes to achieve.

The only person who can answer this question with authority, however, is the president, and questioning him makes no sense. However, two things cannot escape particular attention. One is the radicalization of Moscow’s stance on Ukraine due to both Western policies and Kyiv’s actions; the second is the widening gap between the minimum outcome of the military campaign that Russia can be satisfied with and the maximum amount that the United States and its allies can accept.

For about six years after the signing of the second Minsk agreement in 2015, the Kremlin struggled to enforce that agreement. This would have secured the autonomous status of Donbass within Ukraine and given the region influence over national politics and policies, including the issue of the country’s geopolitical and geoeconomic orientation. From the start, however, kyiv was unwilling to cooperate in the implementation of the agreement, considering it a victory for Moscow. Washington, in pursuit of a policy of containing Russia, encouraged such an obstructionist attitude, while Berlin and Paris, formal guarantors of the agreement (alongside Russia), had no influence in kyiv. and ended up embracing the Ukrainian position.

The election of Vladimir Zelensky as President of Ukraine in 2019 initially seemed like an opening for peace, and President Putin has made a serious effort to get the Minsk agreement off the ground. Kyiv, however, quickly backtracked and took an even tougher stance than before. Nevertheless, until mid-2021, the Kremlin continued to see as its objectives in Ukraine a resolution of the Donbass question essentially on the basis of Minsk, and the eventual de facto recognition of the Russian status of Crimea. In June last year, however, Vladimir Putin published a lengthy article on Russian-Ukrainian relations that made it clear that he saw the current situation as a major security, political and identity issue for his country; acknowledged his personal responsibility; and was resolved to do something to strategically fix it. The article didn’t reveal Putin’s game plan, but it did outline his basic thinking on Ukraine.

Last December, Moscow sent Washington a package of proposals, which amounted to a list of security guarantees for Russia. These included the formal neutrality of Ukraine between Russia and NATO (“no Ukraine in NATO”); and no deployment of US and other NATO weapons and military bases in Ukraine, as well as a ban on military exercises on Ukrainian territory (“no NATO in Ukraine »). While the United States has agreed to discuss some military-technical issues covered in the Russian document, it has rejected Moscow’s key demands regarding Ukraine and NATO. Putin had to take no for an answer.

Just before the launch of its military operation, Moscow recognized the two Donbass republics and told kyiv to leave the parts of Donetsk and Luhansk then under Ukrainian control – or face the consequences. kyiv refused and hostilities began. Russia’s official reason for unleashing force was the defense of the two newly recognized republics which had requested military assistance.

Shortly after hostilities began, Russia and Ukraine began peace talks. At the end of March 2022, at a meeting in Istanbul, Moscow demanded that Zelensky’s government recognize the sovereignty of the two Donbas republics within their constitutional borders, as well as Russia’s own sovereignty over Crimea, which was officially integrated into the Russian Federation in 2014, and accepts a neutral and demilitarized status for the territory controlled by kyiv. At that time, Moscow still recognized the current Ukrainian authorities and was ready to deal directly with them. For its part, Kyiv initially seemed ready to accept Moscow’s demands (which were criticized by many Russians as too concessional towards Ukraine), but then quickly reverted to a tough stance. Moscow has always suspected that this reversal, as on other occasions, was the result of behind-the-scenes American influence, often aided by the British and other allies.

From the spring of 2022, as the fighting continued, Moscow broadened its targets. These now included the “denazification“of Ukraine, which means not only the withdrawal of ultra-nationalist and anti-Russian elements from the Ukrainian government (increasingly characterized by Russian officials now as the “kyiv regime »), but the rooting out of their underlying ideology (based on WWII Nazi collaborator Stepan Bandera) and its influence in society, including in education, media, culture, and other spheres .

Alongside this, Moscow added something that Putin called, in his caustic way, the “decommunizationof Ukraine, that is, to rid this country, whose leadership rejected its Soviet past, of the Russian-speaking or Russian-speaking territories that had been awarded to the Ukrainian Soviet Republic from the USSR by the Communist leaders in Moscow, Vladimir Lenin, Joseph Stalin and Nikita Khrushchev. These include, in addition to the Donbass, all of southeastern Ukraine, from Kharkov to Odessa.

This shift in policy led to abandoning early signals that Russia was honoring Ukrainian statehood outside Donbas and establishing Russian military government bodies in territory seized by Russian forces. Immediately after that, a campaign began to de facto integrate these territories into Moscow. At the beginning of autumn 2022, all of Kherson, a large part of Zaporozhye and part of Kharkov oblasts were drawn into the Russian economic system; started to use the Russian ruble; adopted the Russian education system; and their people were offered a fast track to Russian citizenship.

As the fighting in Ukraine quickly turned into a proxy war between Russia and the US-led West, Russia’s views on Ukraine’s future became more radicalized. While a quick cessation of hostilities and a peace agreement on Russian terms in the spring would have left Ukraine, minus Donbas, demilitarized and outside of NATO, but otherwise under the current leadership with its virulently anti-Russian ideology and its dependence on the West, the new thinking, as Putin’s remarks in Kaliningrad suggest, tends to consider any Ukrainian state that is not fully and firmly cleansed of ultranationalist ideology and of its agents as a clear and present danger; in fact, a ticking time bomb on Russia’s borders, not far from its capital.

Under these circumstances, considering all the losses and difficulties suffered, it would not be enough for Russia to take control of what was once known as Novorossiya, the northern Black Sea coast to Transnistria. This would mean that Ukraine would be completely cut off from the sea and Russia would gain – via referendums, it is assumed – a large swath of territory and millions of new citizens. To achieve this goal, of course, Russian forces still need to seize Nikolaev and Odessa to the south, as well as Kharkov to the east. A logical next step would be to extend Russian control to all of Ukraine east of the Dnieper, as well as the city of kyiv which is mostly on the right bank. If this were to happen, the Ukrainian state would shrink to the central and western regions of the country.

However, none of these results address the fundamental problem that Putin pointed out, namely that Russia must live side by side with a state that will constantly seek revenge and be used by the United States, which arms it. and directs it, in its effort to threaten and weaken Russia. This is the main reason behind the argument for taking over the entire Ukrainian territory up to the Polish border. However, integrating central and western Ukraine into Russia would be extremely difficult, while attempting to build a Russian-controlled Ukrainian buffer state would be a major drain on resources, as well as a constant headache. No wonder some in Moscow don’t mind Poland absorbing western Ukraine into some form of common political entity that Russian foreign intelligence says is being surreptitiously created.

Ukraine’s future will not be dictated, of course, by anyone’s wishes, but by actual developments on the battlefield. The fighting will continue for some time and the end result is not in sight. Even when the active phase of the conflict comes to an end, it is unlikely to be followed by a peace settlement. For different reasons, each side sees the conflict as existential – and much larger than Ukraine. This means that what Russia aims for must be won and then firmly held.