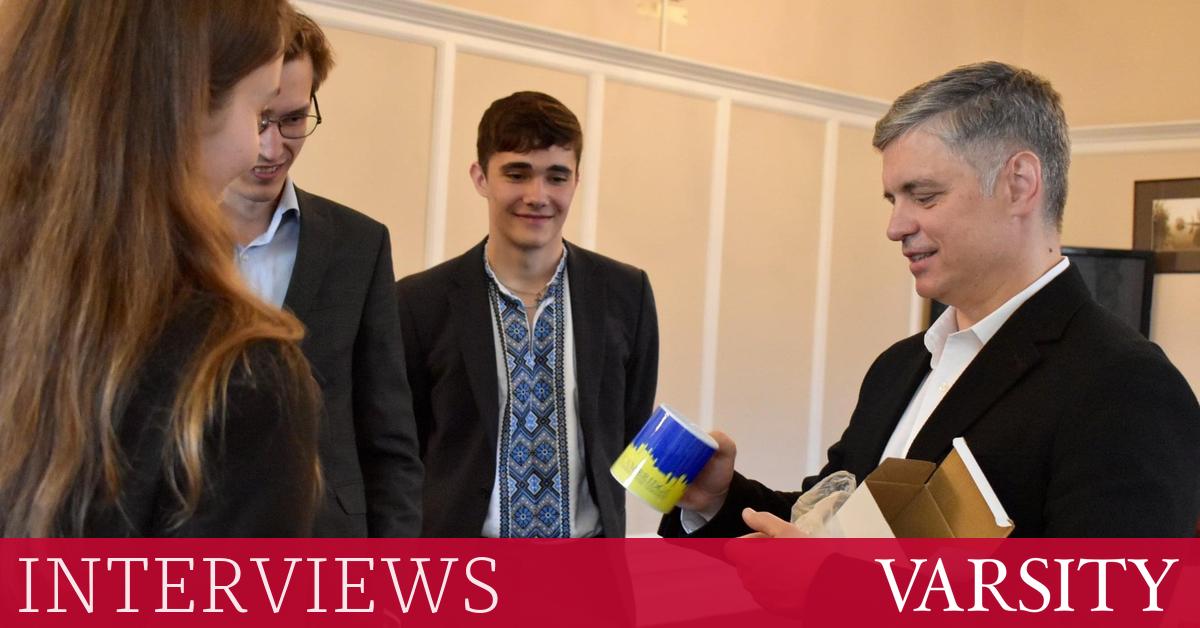 The ambassador who brought Zelensky to Cambridge

I will invite President Zelensky to speak at Cambridge University, a smiling Vadym Prystaiko says to a speechless Union chamber as he relaxes in a chair across from us; an interrogation of University journalists is probably the easiest task for the Ukrainian ambassador since the beginning of the war.

Appointed Ambassador to the United Kingdom by Zelensky on July 20, 2020, Prystaiko did not envisage the transformation of responsibilities that his function would require very quickly. Yet despite the diplomatic precision behind every word, Vadym frankly admits the psychological toll of his work. “Even for us, as diplomats, who have access to this information, we are constantly checking our phones to find out what is happening, who has been killed, who is not, which city has been bombed.”

In March (03/22), Prystaiko Told a British select committee that it was difficult for him to call his fellow Ukrainians “refugees”. Did this change as the war progressed and more than 14 million Ukrainians fled their homes? “We cannot imagine ourselves to be refugees. We are attached to our land,” he explains. “Of these seven million [displaced] Ukrainians, a million have already gone home… The mayor of kyiv is begging people not to come back here.

“We cannot imagine ourselves to be refugees. We are attached to our land”

He reminds me: “Don’t forget that most of the men in our house fight. Most of the refugees are therefore women and children. Two-thirds of them are children. It’s about getting them out as quickly as possible. The ambassador is accompanied by his wife and children, who watch shyly. It reminds me of women and children left behind by war. No Ukrainian family has been spared from the conflict.

Prystaiko’s words are powerful, but many fear they will fall on deaf ears. The UK government has been heavily criticized for its Homes4Ukraine program which some have tagged a scam”. Communication is said to be poor between those seeking housing and those who can provide it, and some refugees have even been reported as “essentially homeless” after being evicted by sponsored hosts.

Yet despite this, Prystaiko stresses his appreciation for the UK’s support. “At least it’s a ploy,” he says. “Yes it’s laborious, yes it’s difficult, yes it’s too bureaucratic, but there are so many cases that we can’t tell the public about when these precautions have actually saved people.”

Does he feel ‘Partygate’ and Boris Johnson’s leadership are affecting the UK’s ability to respond to the crisis? He’s laughing. For him, Johnson and the infighting at Westminster are small fry compared to Vladimir Putin.

But what about the accusations of Russian donors funding the Conservative Party? Ian Blackford, the leader of the SNP in Westminster, claims that the Tories had taken £2.3m “from the Russian oligarchs”. But even at that, Prystaiko thinks Britain is “on the right track”.

“If you want to learn from someone who has had the bad experience of letting dirty Russian money in, talk to us,” he adds regretfully. “We created a whole class of oligarchs, corrupt people, just because we allowed it all to be so connected, so attached to this money.” He has more confidence in Britain’s ability to get rid of Russian money. “Parliament is getting its hands dirty. It’s a very healthy discussion. I believe it will come and you will eliminate all of it, painfully.

Prystaiko, probably not for the first time in his career, tactfully avoids being drawn into political debates. He diplomatically expresses his gratitude for the West’s help to Ukraine, be it sending missiles or their recent victory in the Eurovision Song Contest, but why does he think Ukraine received so much support?

“I used to tell everyone that we would fight for every meter… not many people believed us, but now we do, and that’s why there is grace and popularity for Ukrainians – because these people pay for their lives and they do it in a very professional way.

Asked about the future of the conflict, Prystaiko can only envisage a Ukrainian victory. He hopes for a Russian defeat “on the battlefield” and the justice that will be done afterwards. The significance that a Ukrainian triumph would have not just for his country but for society at large. “At the end of this, we will pursue them. We will have to bring them to justice to make a statement. This has never happened in our recent history, and now society is far from ’21st century’ – we are a different society. For all of us, not just Ukrainians, we cannot just let someone in and allow their soldiers to kill everyone. »

Prystaiko believes that this end to the conflict will also be important for the Russians. “In Russian society, people don’t understand it. 82% of them supported Putin and his order to kill Ukrainians. Isn’t that crazy? “, he asks. “They have family members in Ukraine.”

Faced with the growing crowd of Ukrainian students who are patiently waiting to meet him, Prystaiko concludes by reassuring me of his confidence in the next generation. But he also acknowledges that for Ukrainian students separated from their families at Cambridge, it is an extremely difficult time. He asks for support from the student body, not just financial aid.

“Additional funds are probably a good idea because most parents cannot help their children at the moment for obvious reasons. But psychological help and support is also very necessary. I imagine that for someone who does not who has no relatives and who has not established good relations with new friends in new places, it is very difficult for these people. I believe that any help, not only from the administration of the University, but of society, of students, is very necessary at this time.

He fondly recalls his time at college to students and the pride he has in his own upbringing. “When I talk to great people at your university, there is something every university can be proud of. My own university was created by Igor Sikosky, the helicopter pioneer. So I too, looking at you a lot, am proud to be from there.

He also has some lighter advice, saying while smiling through a smile, “And have a good time too.” Prystaiko’s reminder to enjoy his time at university is a tacit acknowledgment of the weight that will inevitably fall on the young Ukrainian’s shoulders.

President Zelensky will address the Cambridge Union today (11/6) at 5 p.m.

We are therefore almost entirely dependent on advertising for funding and expect to have a few difficult months and years ahead.

Despite this situation, we will be looking for inventive ways to seek to serve our readership with digital content and of course in print!

Therefore, we ask our readers, if they wish, to donate from as little as £1, to help cover our running costs. Thank you very much, we hope you can help us!

Live News: Russia cuts its policy rate for the fourth time since March