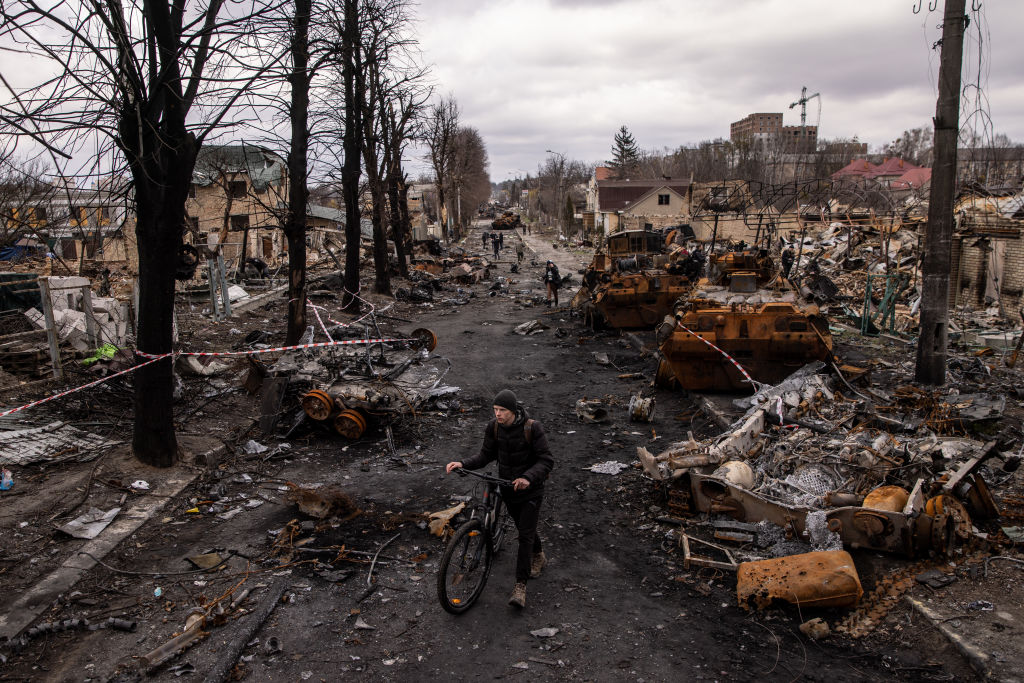 The death, destruction and disruption caused by Russia’s war in Ukraine suggests that the short-term savings made by reducing defense capabilities in peacetime can lead to huge longer-term costs. The cost of investing in military capabilities to deter coercive authoritarian regimes could be much cheaper than the cost of war.

While the invasion has cost Ukraine dearly in human, economic and physical terms, Russia, too, is taking a heavy toll, likely in ways that President Vladimir Putin did not anticipate. Europe will have to bear higher energy costs for some time. Around the world, food insecurity will be exacerbated for those least able to manage it, which could lead to political instability.

It is difficult to know what level of European defense spending could have deterred Putin, and military equipment alone is not enough. Equally important is the resolve and willingness to use these abilities.

The greatest cost to Ukraine is the loss of life caused by the Russian invasion. Civilian and military losses entail substantial intangible and financial costs.

Ukrainian President Volodymyr Zelensky provided a figure of 2,500 to 3,000 military dead as of mid-April. For the same period, US intelligence agencies estimated that between 5,500 and 11,000 Ukrainian soldiers had died, with more than 18,000 injured. The Russian estimate of the number of Ukrainians killed in action was over 23,000 in mid-April. Estimates of civilian deaths also vary. The UN gave a figure of 3,930 as of May 23, but said it believed the number was much higher. The mayor of Mariupol said more than 10,000 civilians had died there by mid-April.

As of May 23, more than 7 million out of 41.9 million Ukrainians were refugees in other countries, while 7.1 million people were internally displaced. This disruption and the destruction of major infrastructure has generated considerable shortages of food, water and electricity throughout the country.

Ukraine’s economy has been hit hard by the conflict and mass exodus. The World Bank projects a 45% contraction in GDP this year, based on collapsing investment, mass displacement, blockages of shipments, falling exports and imports, loss of income and loss of equipment.

Reconstruction will put a strain on Ukraine’s post-war economy. The Kyiv School of Economics economic calculations show that it suffers an estimated $4.5 billion in civilian infrastructure damage every week. Zelensky spoke of a $600 billion reconstruction bill may’s beginning.

The dire situation will not only affect Ukraine, but also the countries caring for its refugees. Poland estimates the cost of hosting 3.5 million refugees this year at 24 billion euros. The Economist’s Intelligence Unit estimates that supporting 5 million refugees could cost Europe around €50 billion in 2022.

Ukraine’s May 29 estimate of the Russian death toll was 30,000. Moscow gave a figure of 1,351 as of March 25. British estimates of Russian military dead on 23 May suggest 15,000. The number of seriously wounded is likely to be at least double the number killed in action.

Pentagon estimates as of May 26, calculate that Russia had lost about 1,000 tanks, 350 artillery pieces, 36 fighter-bombers and more than 50 helicopters.

The World Bank predicts that sanctions and the cost of wartime operations will cause Russia’s real GDP growth to decline by 11.2% this year and inflation to jump from 6.7% to 22% .

In response to the sanctions, Russia has banned certain exports, seized foreign businesses and assets such as aircraft, and prevented foreign investors from selling their shares. But nationalizing foreign companies won’t necessarily keep them in business, seizing planes won’t keep Russia’s aircraft industry flying, and spare parts from the US and EU are under sanction. . The ruble initially depreciated by 30% against most major currencies. It recovered thanks to the action of the Russian central bank and measures such as the obligation for foreign buyers of Russian oil and gas to pay in rubles. However, a strong ruble is not useful if there is nothing to buy with it.

Russia is the world’s second largest crude oil exporter after Saudi Arabia, and it continues to rake in oil and gas revenues for now, helping to fund its war effort. Western European customers are looking to diversify away from Russian energy imports, either to other suppliers or to renewables, and many plan to ban or at least limit their energy imports Russians as soon as possible.

The Kiel Institute for the World Economy traced at least 64.6 billion euros in 37 government-to-government commitments to Ukraine from January 24 to May 10 this year, of which the United States provides more than 65%. At least 25 countries provide military equipment. International assistance includes goods and money to help with military logistics, refugee support and settlement, energy resources, economic offers, medical equipment, emergency services equipment and other humanitarian goods. Australia provided $285 million in military and humanitarian aid.

Ukraine’s supply revealed the meager stocks of modern equipment in many European countries. Many provided weapons that are no longer used on the front line, and some were unusable.

Even the United States will have to restart or expand its own production lines, especially for its low-stock and older items. This is a major problem, as the United States has donated about a third of its javelin stockpile (about 7,000 javelins). Current production rates are low and it will take years to replenish stocks.

While the Western military has no troops in Ukraine, they support Ukrainian forces, including providing intelligence, which adds to the higher cost of the surveillance aircraft effort.

It is clear that Putin did not feel discouraged by the military might of NATO. This failure of deterrence is, in part, a consequence of the fact that many NATO states are enjoying post-Cold War peace dividends. This, combined with an unwillingness to take Russian revisionism at face value and an overreliance on US taxpayers to foot the security bill, was the root of past low military spending. Many NATO members pledged in 2006 to devote 2% of their GDP to military spending, but they did not succeed. NATO reaffirmed the 2% benchmark in 2014 after Russia annexed Crimea, but only three members reached it.

Japan is also likely to increase its defense budget, a trajectory that predated the invasion of Ukraine but was arguably reinforced by it.

Disruption to trade caused by fighting, sanctions and Russia’s blockade of Ukraine’s Black Sea export routes continues to generate significant flow costs around the world. World Bank data from April indicates that Thailand, Vietnam and low-income countries saw some of the steepest declines due to their dependence on imported energy for key sectors, while that major net exporters of crops or energy, such as Nigeria, experienced export surges. .

The Russian occupation of Ukrainian ports and the blockade of Ukrainian shipping have a dramatic impact on world food prices. The surges are mainly a response to the void left by reduced Russian and Ukrainian exports, which previously accounted for nearly 25% of global wheat exports and 15% of corn and fertilizer exports. Wheat prices jumped 40%. Many countries have sought to secure their own food supplies. India, for example, banned wheat exports in mid-May, citing concerns about heat waves reducing stocks and the war in Ukraine raising domestic prices.

The war and resulting policies potentially created the conditions for significant political and social instability. The price hike mainly affects food importers such as Somalia, which bought 90% of its wheat from Ukraine and Russia.

Price hikes have driven the global food crisis to famine levels. Before the conflict in Ukraine, many low-income countries were already at risk of famine due to war, extreme weather conditions in Africa, high livestock prices, increased food demand after Covid-19 and global supply chain disruptions. Just before the war, the UN estimated that more than 140 million people were suffering from acute hunger and in urgent need of food aid.

The disruption of the interconnected global economy also affects commodity and metal prices. Russia is a major exporter of aluminum, iron, steel, copper and nickel. While some can be purchased elsewhere, war is likely to cause substantial cost increases and disruptions.

The impact of the war on production and the sanctions against Russian crude oil, petroleum products and gas generated a massive increase in energy prices. Europe was the hardest hit as it depended on Russia for 35% of its natural gas, 20% of its crude oil and 40% of its coal, but developing economies were also hard hit.

In Australia, the average retail petrol price reached 182.4 cents per liter at the end of February, the highest inflation-adjusted price since 2014. Average prices in Australia’s five largest cities reached nearly 215 cents per liter in mid-March.

As a major exporter of energy and food, Australia can help fill the gaps in Ukrainian and Russian production and benefit from higher commodity prices. Australian government forecasters expect commodity exports to hit $424.9 billion for the fiscal year to June 30, up a third from 2020-21 profits. This growth will likely be driven by higher iron ore prices, which have risen from projections of US$118 per tonne to US$160 in 2022. Forecasters also expect liquefied natural gas export revenues to nearly double. , rising from $32 billion in 2020–21 to over $70 billion in 2021–22, while the average price of coking coal is expected to rise from US$123 per ton in 2020–21 to US$348 in 2021 –22.

The ambassador who brought Zelensky to Cambridge