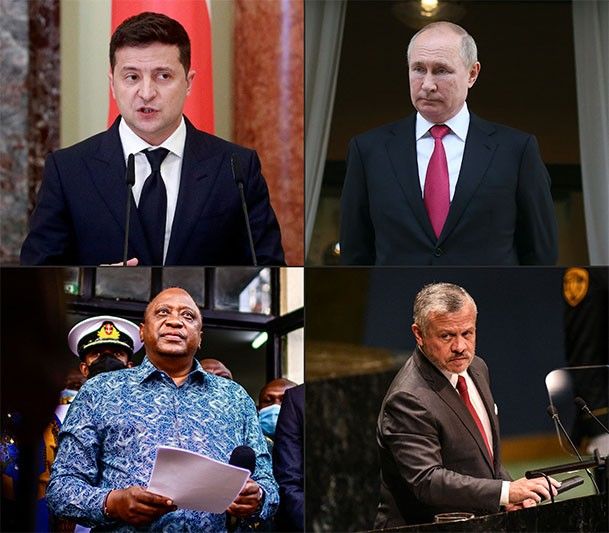 Key revelations from the “Pandora Papers”

WASHINGTON, United States – An investigation based on one of the largest financial document leaks on Sunday revealed a hidden world of protected wealth belonging to hundreds of politicians and billionaires.

One of the largest global media surveys ever, the â€œPandora Papersâ€ involved more than 600 journalists who together analyzed some 11.9 million documents from financial services companies around the world.

They found links between nearly 1,000 companies in offshore havens and 336 high-level politicians and officials, including more than a dozen heads of state and government.

Here are some key revelations:

The real estate empire of the King of Jordan

Records show that King Abdullah II, who has faced protests of anger over austerity measures in recent years, created a network of offshore companies and tax havens to build a $ 100 million real estate empire between 2003 and 2017, including 15 homes from Malibu, California to Washington and London.

The Jordanian Embassy in Washington declined to comment, but the BBC quoted lawyers for the king as saying all the properties were purchased with personal wealth and it was common for prominent people to purchase properties. through offshore companies for privacy and security reasons.

The family and associates of Azerbaijani President Ilham Aliyev – long accused of corruption by human rights groups – have allegedly been secretly involved in hundreds of millions of property deals in Britain, including one approximately $ 45 million office building on behalf of the president’s 11-year-old. -the old son, Heyder.

The central London property was bought in 2009 by a shell company owned by a family friend of the President of the Central Asian state before being handed over to his son, the BBC reported.

According to the documents, Czech Prime Minister Andrej Babis has not declared an offshore investment company used to buy a castle worth $ 22 million in the south of France.

The prime minister faces elections later this week and denounced the revelations as “attempting to tarnish my reputation and affect the Czech general elections”, saying in an interview with Czech news agency CTK that “he is clear that I did not do anything illegal or wrong. “

The investigation indicates that Kenyan President Uhuru Kenyatta – who has campaigned against corruption and for financial transparency – is accused along with six members of his family of secretly owning a network of 11 offshore companies, one of which was valued at 30. millions of dollars.

The inner circle of the Pakistani prime minister

It has been discovered that members of Pakistani Prime Minister Imran Khan’s inner circle, including ministers and their families, secretly own companies and trusts holding millions of dollars.

Khan himself praised the findings on Twitter, saying they exposed “ill-gotten wealth of elites, accumulated through tax evasion and corruption and laundered in” financial “havens” and vowed to investigate any wrongdoing.

Although Russian President Vladimir Putin is not directly named in the files, he is linked via associates to secret assets in Monaco – including a waterfront house acquired by a Russian woman who allegedly had a child with Putin. , reports the Washington Post.

Separately, the documents appear to show that the law firm of President Nicos Anastasiades of Cyprus concealed the identity of the owner of several offshore companies: a former Russian politician accused of embezzlement. The company denies the charges, the BBC said.

Transfer of the Ukrainian president

According to the findings, just before his election as President of Ukraine in 2019, Volodymyr Zelensky transferred his stake in a secret offshore company.

Previously vocal critics of tax loopholes, former British Prime Minister Tony Blair and his wife bought an $ 8.8 million building in London in 2017 by buying out the British Virgin Islands company that owned it.

In accordance with UK law, by doing so, they avoided paying hundreds of thousands of dollars in taxes.

The BBC noted that there was no indication the Blairs were hiding their wealth, and Cherie Blair said the couple had brought the property back under British rule.

Lawyers for the three told the ICIJ the investments were legitimate and denied any suggestion of tax evasion.

NS2, a win-win proposition? – The Hindu