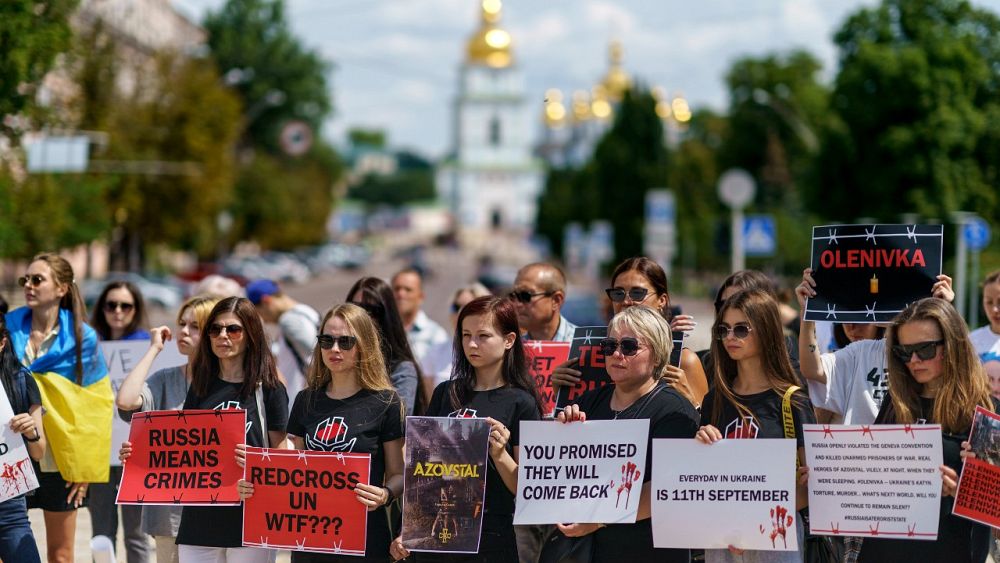 1. The Supreme Court of Russia calls the Azov regiment a terrorist organization

Russia’s Supreme Court has declared the Ukrainian Azov regiment a terrorist organization, a designation that could lead to terrorism charges against some of the captured fighters who made their last stand inside the destroyed Mariupol steelworks.

Dozens of Azov fighters have been held by Moscow since their surrender in mid-May. Russian authorities have opened criminal charges against them, accusing them of killing civilians. Adding terrorism charges could mean even longer prison sentences.

The sentences for leaders of a terrorist organization would be 15 to 20 years in prison and five to 10 years for members of the group, Russian state media said.

The Azov regiment rejected the decision, accusing the Kremlin of “looking for new excuses and explanations for its war crimes”. He urged the United States and other countries to declare Russia a terrorist state.

Azov soldiers played a key role in the defense of Mariupol, holding out for weeks at the southern port city’s steelworks despite punitive attacks by Russian forces. Ukraine’s president hailed them and other plant defenders as heroes.

Moscow has repeatedly described the Azov regiment as a Nazi group and accused it of atrocities, although no evidence to support these claims has been made public.

The regiment, a unit within the National Guard of Ukraine, has a checkered history. It grew out of a group called the Azov Battalion, formed in 2014 as one of several volunteer brigades assembled to fight Russian-backed separatists in eastern Ukraine.

The Azov Battalion drew its earliest fighters from far-right circles and drew criticism for some of its tactics. Its current members have rejected accusations of extremism.

The regiment’s far-right origins were seized upon by the Kremlin as part of its effort to make the Russian invasion a battle against Nazi influence in Ukraine. Russian state media repeatedly showed what they claimed were Nazi insignia, literature and tattoos associated with the regiment.

Last week, dozens of Ukrainian prisoners of war, including defenders of the Mariupol factory, were killed in an explosion at a barracks in a penal colony in Olenivka, an eastern town controlled by pro-separatists. -Russians. Moscow and Kyiv blamed each other for the blast, with Kyiv saying Russia blew up the barracks to cover up torture against prisoners of war.

2. French Le Pen calls for an end to EU sanctions against Russia

France’s far-right leader Marine Le Pen on Tuesday called for EU sanctions against Russia to be lifted over the war in Ukraine, saying they “are of no use” except to “do suffer the Europeans”.

The leader of the National Gathering (National Rally) hoped that the sanctions “disappear to prevent Europe from being faced with a blackout, in particular concerning gas imports”.

“Contrary to the boasts of our government, the Russian economy is not on its knees and has not stopped paying,” the lawmaker told a press conference at the French parliament.

“We are much more victims of these sanctions than Russia,” Le Pen said, saying Moscow “has found other customers” and “is circumventing the various embargoes.” She accused the EU of “a succession of failures”.

On June 1, Marine Le Pen had already warned against the “cataclysmic consequences on the purchasing power of the French” of the bloc’s six series of sanctions against Russia. Instead, she argued that causing gas and oil prices to collapse would have been “the real sanction against Russia” because it would “have strangled the country much more financially.”

A Yale University study said last week that Russia’s economy had been “catastrophically crippled” by Western sanctions and the mass exodus of international companies.

Le Pen’s comments echo those of Hungarian Prime Minister Viktor Orban, who said last month that the EU had “shoot yourself in the lungs” with its sanctions against Russia.

Le Pen lost to Emmanuel Macron in the second round of the French presidency in April, but his party became the third largest in parliament in the June elections, winning 89 seats.

Macron accused her rival of “depending on Russian power” and talking “to your banker” in her dealings with Moscow, in reference to a loan her former National Front party took out from a Russian bank.

Until his invasion of Ukraine in February, the French far-right leader consistently defended Moscow’s foreign policy, backing its annexation of Crimea. Earlier this year, she blamed NATO and the West outright for Russia’s military buildup on the Ukrainian border, and even with the war underway, her presidential manifesto advocated an alliance with Moscow on European security.

Le Pen has also openly expressed his admiration for the Russian leader. “The main political lines that I defend are the main lines that Mr. Trump defends, that Mr. Putin defends”, she said in 2017.

3. Turkey expects one grain ship per day to leave Ukraine

Turkey expects around one grain ship to leave Ukrainian ports every day as long as an agreement guaranteeing safe passage is maintained, a senior Turkish official said on Tuesday after the first warship safely left Odessa. security Monday.

The first authorized shipment of Ukrainian grain since the war began on February 24 arrived off the northern Black Sea coast in Istanbul on Tuesday evening, an AFP team reported. The Razoni, carrying more than 26,000 tonnes of maize to Lebanon, is to be inspected on Wednesday by Russian, Turkish, Ukrainian and UN officials.

“The plan is for one ship to leave…every day,” the senior Turkish official told Reuters, referring to Odessa and two other Ukrainian ports covered by the deal. “If all goes well, exports will be via one ship per day for some time.”

The sailing was made possible after NATO member Turkey and the United Nations brokered a grain and fertilizer export deal between Russia and Ukraine last month in a rare diplomatic breakthrough.

Exports from one of the world’s largest producers are intended to help alleviate a global food crisis.

On Monday, Ukraine’s Infrastructure Ministry said another 16 ships, all stranded since the start of Russia’s full-scale invasion of Ukraine on Feb. 24, were awaiting their turn in Odessa.

Ukrainian President Volodymyr Zelenskyy said on Monday it was “too early” to welcome the resumption of grain shipments, while other Ukrainian officials warned that Russia could seek to sabotage the operation .

4. Russia accuses the United States of being directly involved in the war in Ukraine

Russia has accused the United States of being directly involved in the conflict in Ukraine, saying American spies were approving and coordinating Ukrainian missile strikes on Russian forces.

“All of this proves undeniably that Washington, contrary to the claims of the White House and the Pentagon, is directly involved in the conflict in Ukraine,” the Defense Department said.

US President Joe Biden has said he wants Ukraine to defeat Russia and supplied Kyiv with billions of dollars in weapons, but US officials don’t want a direct confrontation between US and Russian soldiers.

Russia has said the Biden administration was responsible for missile attacks against civilian targets in areas controlled by Russian-backed forces in eastern Ukraine.

“It is the Biden administration that is directly responsible for all Kyiv-sanctioned rocket attacks against residential areas and civilian infrastructure in populated areas of Donbass and other regions, which have resulted in mass civilian deaths. “, said the Ministry of Defense.

Washington announced on Monday that it would send 550 million dollars (535 million euros) in aid in the form of new weapons to Ukrainian forces fighting the Russian invasion, including ammunition for HIMARS rocket launchers.

5. “Left behind”: How war is hitting disabled people in Ukraine

Some of the most vulnerable Ukrainians have been caught up in a savage conflict far beyond their control.

Before the Russian invasion, there were around 2.7 million people with some form of physical or intellectual disability in Ukraine, according to Inclusion Europe, a European disability organization.

He says that even before the war, many “experienced prolonged stigma, isolation and barriers to accessing community support”.

There are concerns about the fate of tens of thousands of disabled people living in residential institutions, such as orphanages or retirement homes.