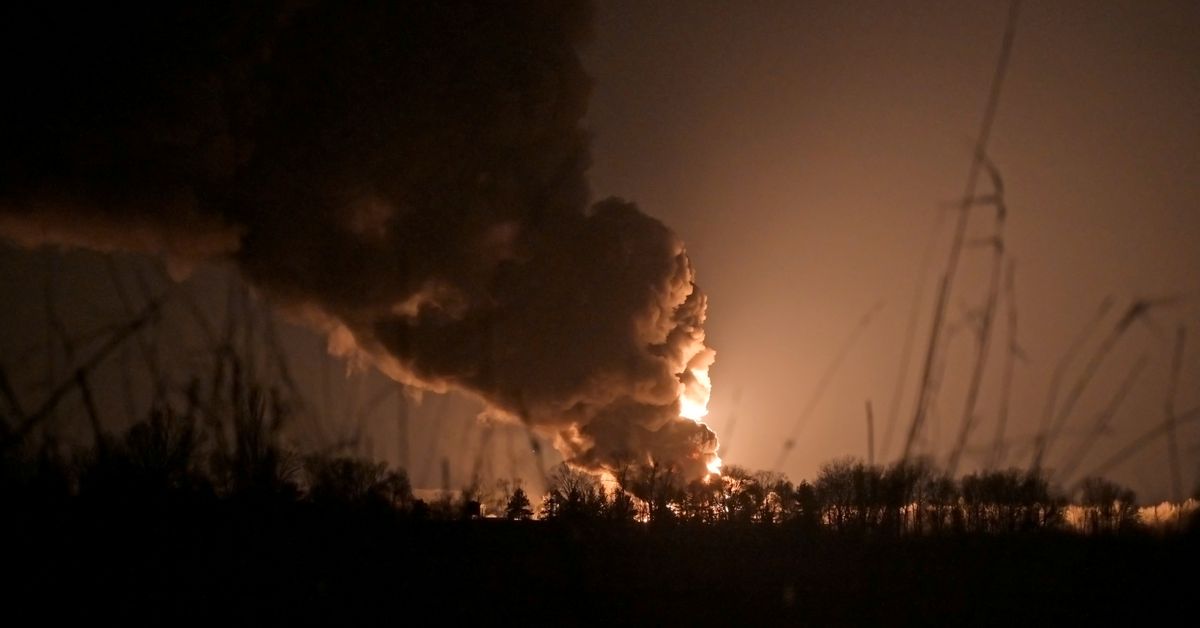 Ukrainian forces were holding back Russian troops advancing towards the capital, Kiev, President Volodymyr Zelenskiy said as the biggest assault on a European state since World War II entered its fourth day.

Russian missiles have found their mark, including a strike that set fire to an oil terminal in Vasylkiv, southwest of Kiev, the city’s mayor said. The explosions sent huge flames and black smoke into the night sky, online posts showed.

There was also heavy fighting for Ukraine’s second largest city, Kharkiv, in the northeast, where Russian troops blew up a gas pipeline, a Ukrainian state agency said. The gas explosion sent a mushroom cloud into the darkness.

Russian-backed separatists in the eastern province of Lugansk said a Ukrainian missile blew up an oil terminal in the town of Rovenky.

Russian President Vladimir Putin launched what he called a special military operation on Thursday, ignoring weeks of Western warnings and saying ‘neo-Nazis’ in power in Ukraine were threatening Russia’s security – a charge that Kiev and Western governments call it baseless propaganda.

Reuters witnesses in Kyiv reported occasional explosions and gunfire in the city on Saturday night, but it’s unclear where it came from.

“We resisted and successfully repelled enemy attacks. The fighting continues,” Zelenskiy said in a video message from the streets of Kiev posted on his social media.

A US defense official said Ukrainian forces were putting up “very determined resistance” to Russia’s air, land and sea advance, which has sent hundreds of thousands of Ukrainians fleeing west, obstructing the major highways and railways.

The United States and its European partners have said they will also impose restrictions on Russia’s central bank to limit its ability to support the ruble and fund Putin’s war effort.

“We are determined to continue to impose costs on Russia that will further isolate Russia from the international financial system and our economies,” said a statement from the United States, France, Germany, Canada, Italy, Great Britain and the European Commission. Read more

After initially hesitating such a move largely due to concerns about the impact on their economies, the allies said they were committed to “ensuring that certain Russian banks are removed from the messaging system SWIFT”.

They did not name which banks would be expelled, but an EU diplomat said around 70% of the Russian banking market would be affected. Read more

The decision – which France’s finance minister had called a “financial nuclear weapon” because of the damage it would inflict on the Russian economy – is a blow to Russian trade and makes it harder for its companies to do business.

SWIFT, a secure messaging network that facilitates fast cross-border payments, said it was preparing to implement the measures.

Sanctions on Russia’s central bank could limit Putin’s use of its more than $630 billion in international reserves, widely seen as protecting Russia from some economic harm.

Google banned Russian state media RT and other channels from receiving money for ads on their websites, apps and YouTube videos, as Facebook did.

The Kremlin said its troops were again advancing “in all directions” after Putin ordered a pause on Friday. The Ukrainian government said there was no break.

Particularly in northern Ukraine, Russian forces “were frustrated by what they saw as very determined resistance,” the US official said, without providing evidence.

Russia has not released casualty figures and it has been impossible to verify the tolls or the precise picture on the ground.

Interfax later quoted the Donetsk regional administration in eastern Ukraine as saying 17 civilians had been killed and 73 injured by Russian shelling. Moscow says it takes care to avoid civilian sites.

Ukraine, a democratic nation of 44 million people, gained independence from Moscow in 1991 after the fall of the Soviet Union and wants to join NATO and the EU, goals that Russia opposes.

Putin has said he must eliminate what he calls a serious threat to his country from his smaller neighbor, accusing him of genocide against Russian-speakers in eastern Ukraine – something Kiev and its allies Westerners dismiss it as a lie.

US President Joe Biden has approved the release of up to $350 million worth of weapons from US stockpiles, while Germany, in a shift from its longstanding policy of not exporting weapons to areas of war, said it would send anti-tank weapons and surface weapons. air missiles. Read more