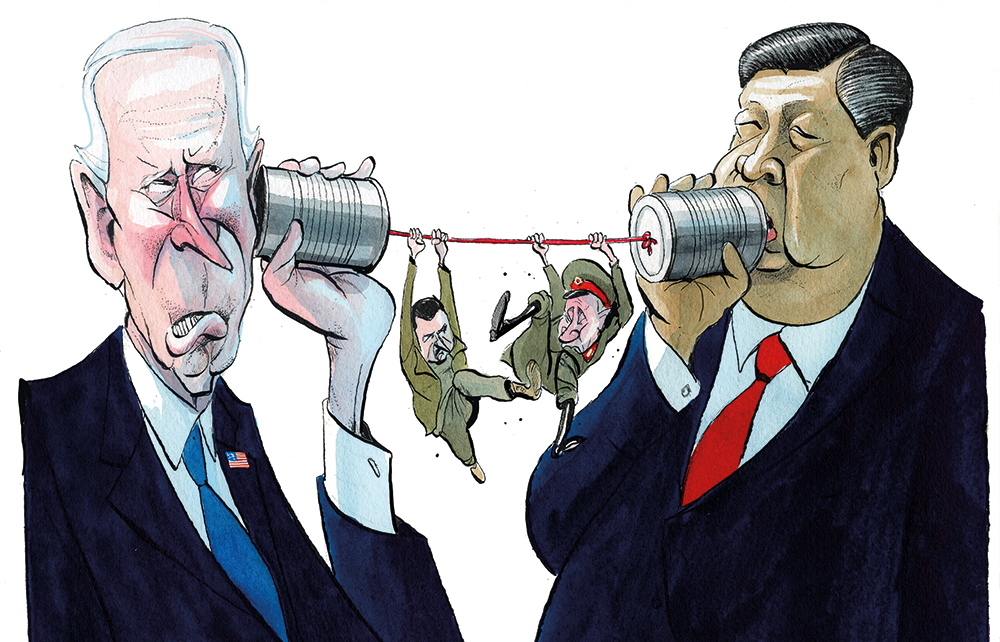 Since the start of Russia’s invasion of Ukraine, China has played a decisive – albeit publicly discreet – role in strategic decision-making in Washington and Moscow. As I report for the first time in my new book Overreach, it was an indirect intervention approved by Beijing that pushed the United States to sabotage a deal for the Poles to supply Soviet-made MiG-29 jets to the Ukrainian Air Force in March. And since September, a flurry of Chinese Foreign Minister Wang Yi’s personal diplomacy with NATO and the United States has led to a rare moment of public agreement on Russia, when Xi Jinping said the world “must prevent a nuclear crisis on the Eurasian continent”. during a meeting with Joe Biden at the G20 summit in Bali.

Throughout the war, China’s true position on the Russian-Ukrainian conflict has been difficult to pin down, not least because Beijing has told both sides what they want to hear. In March, Wang appeared to implicitly accuse the United States of “stirring up tensions” and “sowing discord” with Russia. Last month, he told his Russian counterpart, Sergei Lavrov, that “China will also firmly support the Russian side, under the leadership of President Putin, to unite and lead the Russian people,” according to state broadcaster CCTV. Wang also promised that “China is willing to deepen contacts with the Russian side at all levels.” However, in September, on the sidelines of the United Nations General Assembly, Wang told NATO Secretary General Jens Stoltenberg that China “remains open to dialogue and exchanges with NATO and is willing to promote jointly the sound and steady development of bilateral relations…in a spirit of honesty and mutual respect”.

So which side is Beijing really on? The reality is that China has always supported only one side – its own. But the illusion of Chinese support was one of many miscalculations that led Vladimir Putin down the path to war. At a summit in Beijing on Feb. 4 this year, Xi and Putin announced “boundless friendship” without “no-go zones” for cooperation. The two leaders said the new level of Sino-Russian strategic partnership was “superior” to Cold War-era alliances. Beijing was aware of Russia’s plans for a military operation, according to a source with long-standing close ties to the highest levels of China’s political and military leadership. But the Russians presented the upcoming military operation as a “limited operation to recover a lost Russian province”. [and] reunify Russia within historical borders”. This narrative matched China’s on Taiwan – although it was made clear that the Russian operation was not to interfere with the Winter Olympics in Beijing, which ended on February 20 – four days before the start. Putin’s invasion.

More importantly, in a confidential “friendship without limits” appendix was a guarantee of mutual security that Russia had been seeking for decades from China but had so far been unable to obtain. said the source. Like Article 5 of NATO – that an attack on one member is an attack on all – Beijing and Moscow have pledged to come to each other’s military aid in the event of a foreign invasion of their territory and if particular conditions were met as to the cause of such an invasion. invasion. This extremely cunning and prescient clause, inserted at Chinese insistence, would effectively exclude recently annexed territories in wartime, freeing Beijing from any commitment to respond to attacks on annexed territories in Ukraine.

The scale of the Russian military operation – in particular the well-kept secret of the lightning attack on Kyiv, which even Lavrov was unaware of until February 21 – took Beijing by surprise. Although the Chinese officially backed Putin diplomatically, blaming NATO for provoking the conflict, there was deep (and well-founded) concern that Putin had overstepped his bounds and would provoke the West into a united front that a limited operation in the Donbass would have avoided. Putin’s nuclear escalation threat on February 27 alarmed the world, including the Chinese. One of Beijing’s main priorities was for the Russo-Nato confrontation to “avoid any nuclear escalation and help achieve a ceasefire”, said the source, who maintains regular personal contact with NATO leaders. People’s Liberation Army (PLA). However, Putin had – imprudently in the eyes of the Chinese – played his most dangerous card from the start of the conflict.

So when, a few days later, a further escalation threatened in the form of an offer by the Polish government to supply Ukraine with its entire fleet of Soviet-era MiG-29 fighters, the Chinese were concerned. In truth, the Polish MiGs were unlikely to make much of a difference on the battlefield. The 26 to 33 Polish MiG-29s had been manufactured in the early 1980s for the East German Air Force and had been sold in Warsaw for the symbolic sum of €1 each in 2003. Romania, which had 20 similar MiG-29 aircraft, had decommissioned them many years ago. Nevertheless, a NATO country supplying fighter jets of any type to Kyiv represented an important symbolic, if not necessarily operationally significant, step towards direct NATO involvement in the conflict. Initially, Washington was positive. But the next day, March 8, the Pentagon abruptly reversed its position, declaring the Polish proposal “untenable”.

What changed Washington’s mind? It was partly an urgent and confidential initiative involving former European leaders and senior officials, and ultimately endorsed by the Chinese. Since Putin’s Feb. 27 statement on nuclear readiness, the PLA had also reached out through military (as opposed to diplomatic or political) channels to senior Russian officers with whom they had made personal contact over the course of years of joint military exercises. and military procurement negotiations. Beijing’s goal was to ensure that even if there was a political decision to use nuclear weapons, the Russian military would insist on sticking to its longstanding military nuclear doctrine of using them only if they were provoked by attacks on Russian soil. Through these unofficial “second track” contacts, Washington and the PLA agreed – uncharacteristically, given the deterioration of relations under the presidency of Donald Trump – that if the United States ended the MiG agreement, the generals in Beijing would do their best to defuse Putin’s nuclear threat on an operational level. “It worked,” the Chinese source said. ‘The [US] decided that the provision of aircraft was a step too far.

Although this backdoor initiative of early March has gone unreported before, the fact that the United States has maintained a fundamentally cautious stance on the supply of strategic arms to Ukraine throughout the war effectively confirms that Washington remained keenly aware of Chinese concerns, which were shared with many of the larger nations of the European Union. Despite a dramatic escalation in supplies of money and military hardware – including the NATO-standard 155mm artillery capable of firing guided shells and the High Mobility Artillery Rocket System – NATO refrained from supplying attack aircraft, helicopters, NATO-standard tanks, long-range guns, battlefield missile and cruise missile systems.

At the same time, Chinese support for Moscow has remained equally cautious. Beijing has offered diplomatic and informational support – but has ruled out significant military cooperation, forcing the Russians to buy drones from Iran, cannibalize home appliances for computer chips and try to buy up helicopters, missiles and rockets. missile defense systems to military customers in the developing world. The threat of US sanctions on their global operations has prompted many major Chinese banks such as ICBC, New Development Bank and Asian Infrastructure Investment Bank to withdraw credit and funding from Russia. Chinese energy giants such as Sinochem have also suspended all Russian investments and joint ventures. In August, UnionPay – the Chinese equivalent of Visa and Mastercard – also ceased cooperation with Russian banks, citing sanctions. The material motivation for Beijing companies to withdraw from Russia was clear: before the war, China was doing $100 billion in trade with Russia (expected increase of $30 billion this year thanks to increased oil imports), but more than 1,500 billion dollars with the United States and the EU. .

With Biden and Xi’s joint condemnation of the nuclear weapons threat in Bali earlier this month, March’s so-called “track two” agreements have become “track one” public policy. Thanks to Wang’s shuttle diplomacy, NATO and China have effectively aligned themselves on not escalating the conflict between Ukraine and Russia, according to the Chinese source. In a series of meetings with NATO leaders since early September, Wang pledged to use China’s considerable influence in Moscow to dissuade Putin from using nuclear weapons, while in return , NATO said it would not supply strategic weapons to Ukraine.

When you subscribe to The spectator for just £12. Sale ends Monday

At the Bali summit, Xi (supported by Indian Prime Minister Narendra Modi) publicly called for “a return to diplomacy and stressed the urgency of finding a peaceful solution”. It is a position that has not yet been officially adopted by NATO, which insists that the Ukrainians will decide when to come to the negotiating table. But many high-level voices within NATO – for example US Chairman of the Joint Chiefs of Staff Mark Milley and Frenchman Emmanuel Macron – have independently suggested that Kyiv should prepare for peace talks. And China’s security guarantees on Russia’s borders before the invasion made in February could play an important role in building a face-saving exit ramp for the Kremlin in opposition to likely security guarantees from the Kremlin. NATO for Ukraine.

China’s price for restoring peace? Beijing hopes to improve relations with NATO and Europe and put an end to a bloody and futile war that its ally Putin launched so recklessly. In Ukraine, China, in the source’s words, “is finally positioning itself as our last hope for peace in this world.” Ukrainians, who will likely be asked to sacrifice land for peace, may not agree.