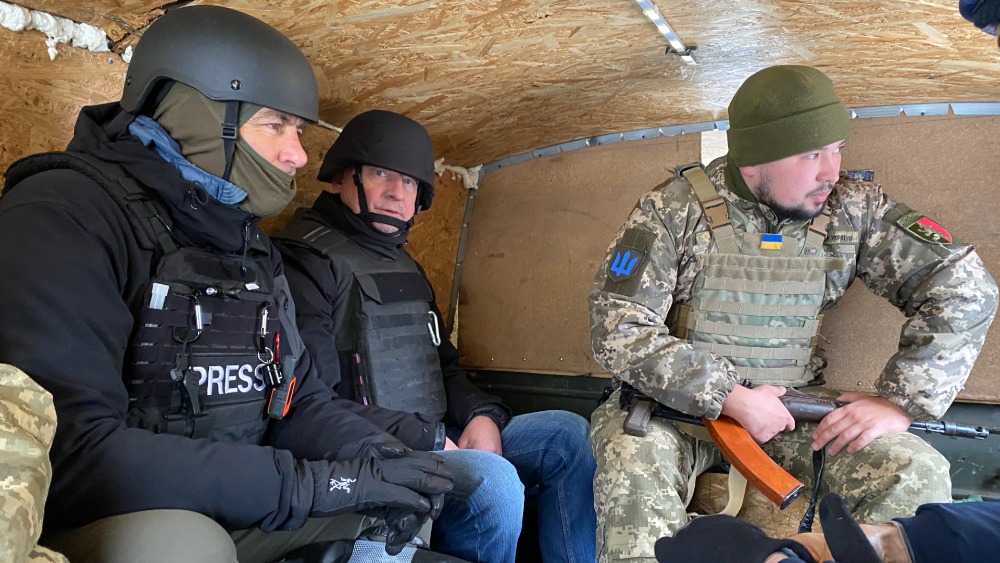 The last time Variety Caught up by Sky News chief correspondent Stuart Ramsay, he was holed up in a military compound near Kabul airport, where thousands of Afghan civilians were waiting to be evacuated as the Taliban watched.

Seven months later – after a stint in the Brazilian Amazon and a quick trip to the UK for Christmas in between – he spent two months in Ukraine. Ramsay and his producer, Dominique van Heerden, have been in Kyiv for about a week, and in recent days it’s become much harder to turn a blind eye.

“The problem is that we don’t get much sleep at night because of the bombing, so it all gets a bit hazy,” says Sky’s longest-serving overseas correspondent. ” It’s very difficult. The shelling is very heavy, and with the shelling it can be very indiscriminate. »

The team is in a relatively quiet area, but near “strategic military roaming,” Ramsay says, meaning the area could be under attack overnight. Until Saturday, the media enjoyed good mobility and the Ukrainian armed forces were “very friendly”, but there were many restrictions on what can be filmed.

“There are many people [militias] with guns now on the streets and them and the police – who are all armed – and the military are very, very nervous,” Ramsay says. “It’s potentially very dangerous in that they can suddenly start yelling at you because you’re filming something and they didn’t notice you were there, and then you have to prove you’re not. a Russian spy. [or] Special forces.”

At press time, a 36-hour curfew is in place for Kyiv; the Sky News team will not be able to travel to the city until Monday morning. There is talk of the government organizing press trips via buses on Sunday, with police protection, “but I’m not convinced we’ll be on any of them,” Ramsay says.

“There are too many things that can go wrong with these types of set-piece events,” he says. “If they are wrong, we are suddenly on a bus attacked by the Russian army or someone else.”

Ramsay has a long reporting history in Ukraine. The British journalist covered Russia’s annexation of Crimea and the Donbass war from 2014 to 2015, and was even held hostage for a day (one of three hostage situations he has experienced) .

In his 30 years as a journalist covering 18 separate wars and a myriad of natural disasters, he’s “been much more scared” than he is in Kyiv right now, “but that doesn’t mean that it’s not scary or difficult,” he says.

Ramsay observes that worldwide support for the Ukrainian Armed Forces, especially on the arms front, is already evident in Kyiv’s defense against Friday night’s Russian attacks. “I think [the U.K.] and the EU and the US in particular actually dumped weapons there.

There have been a few explosions so far Saturday night, but it’s still relatively quiet. “We’re scratching our heads a bit,” he says.

Reporters are trying to figure out if Russia is faking it until it finds a strategic position, waiting for reinforcements, or, as Ramsay puts it, “just getting beat up.”

“The question is, is this just a huge effort by the Ukrainian professional army, Ukrainian conscripts and militias? Or is it a reflection of the fact that Russia is not as good as everyone thought? Or is it just the advice and equipment given to them by the West? »

On Sunday, despite the curfew, the Sky News team will have access to the roof of their building, where they will work on a comprehensive package including an analysis of the war in Ukraine, as opposed to the invasion of Kiev which they are reporting on. is focused. over the past few days.

When asked how long he expects to be in the situation, Ramsay says, ominously, “There’s no timeline at all.”

“On the face of it, if you were to say Russia are going to win this one, it would be amazing to be here if they weren’t. But assuming they are and taking the relay, there will be a long time before people are allowed out and God knows the bureaucracy, we could be talking weeks and weeks, to be honest.