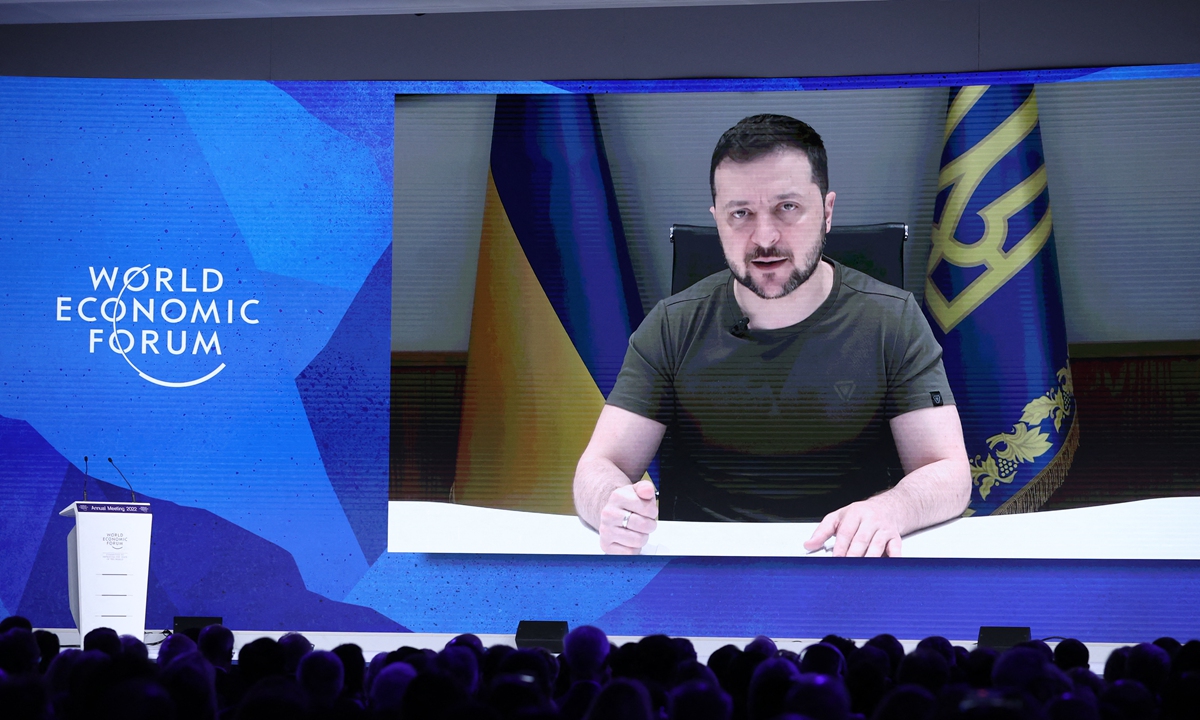 Ukrainian President Volodymyr Zelensky attends the annual meeting of the World Economic Forum via videoconference in Davos, Switzerland, on May 23, 2022. Photo: AFP

Ukraine tops the agenda at the World Economic Forum (WEF) in Davos where Ukrainian President Volodymyr Zelensky called for more aid and a firmer isolation of the Russian economy in a speech on Monday, the day where Western defense chiefs meet virtually to discuss further military aid to the country in a protracted military conflict with Russia.

Backing Ukraine, the West’s new ‘political correctness’, has hijacked Davos and depleted EU arms stockpiles, observers have said, predicting exposed differences within the ‘Western bloc’ will escalate. will expand as the Russian-Ukrainian conflict drags on.

Zelensky took advantage of the Davos forum on Monday to demand more weapons for his country and “maximum” sanctions against Moscow. Addressing a Davos session via video conference, he called for an oil embargo on Russia, sanctions on all its banks and an end to all trade with the country, media reported.

Also on Monday, the Ukrainian Contact Group, made up mostly of Western defense chiefs led by US Secretary of Defense Lloyd Austin, met again to bolster military support for Ukraine after Austin discussed “Ukrainian demands” with his Ukrainian counterpart Oleksii Reznikov last week.

Ukraine kept asking for heavy weapons, including long-range rocket launchers that the United States had resisted.

US President Joe Biden signed an additional $40 billion for Ukraine on Saturday during his Asia trip, half of it in military form, after the bill won bipartisan support and passed an overwhelming majority in the US Congress. .

Lü Xiang, a researcher at the Chinese Academy of Social Sciences, told the Global Times on Monday that the United States has actively fueled the Russian-Ukrainian conflict from the very beginning and that Europe is dancing to the tune of “values”. the United States. “

The United States will spend money on NATO forces to help train soldiers and supply weapons to Ukraine while the money will go to NATO forces in Europe, which are mostly American. , and Lü called the pattern “left-to-right”.

The United States is also mobilizing transatlantic allies to supply in-service weapons to Ukraine, but Europe has covered that aid. Transport to Ukraine remains the biggest problem – weapons are piling up on the Polish-Ukrainian border, the expert said.

The EU on Wednesday urged member countries to quickly replenish their “depleted stocks” of ammunition and military equipment, and offered financial incentives to those willing to work together to replace equipment sent to Ukraine.

But that was too idealistic and too heavy an economic burden for the bloc, observers said, because supporting Ukraine is politically correct in Western values, but how much support is a real question of interests.

In addition to the military, conflicts of interest are increasingly blatant in the political and economic spheres.

Finland’s and Sweden’s NATO membership has been slowed by Turkish opposition, and Ukrainian applications for EU membership have been implicitly rejected.

Polish Prime Minister Mateusz Morawiecki said on Sunday that Norway should share the “gigantic” profits it has recently made from rising oil and gas prices, especially with Ukraine. Morawiecki noted that profits from oil and gas this year for Norway, “a small country of five million [people]will be more than 100 billion euros higher than in recent years, according to Poland’s Notes news portal.

Despite extensive Western sanctions imposed on Russia in recent months, Russian gas flows through the complex network to the western edge of the continent, with the exception of countries such as Bulgaria, Poland and Finland which have refused to pay in rubles.

The difficult issue of the Russian gas and oil embargo reveals the complexity of intertwined interests beyond the battlefield, Lü said. “NATO member Poland’s unwavering support for Ukraine gave Zelensky the illusion that the West would back him unwaveringly at all costs, but Poland may have its own calculations,” the statement said. expert.

Poland and western Ukraine have traditionally been close to each other, and Poland may want to cede as many interests as possible to the crisis, Lü said.

The Wall Street Journal published an opinion piece by Ralph Gert Schöllhammer, assistant professor at the private Webster University of Vienna, that the EU, built with France and Germany at its center, is wary of a concurrent Warsaw-kyiv axis if Ukraine enters the bloc.

Ukrainian GM Andrii Baryshpolets is a candidate for the FIDE presidency