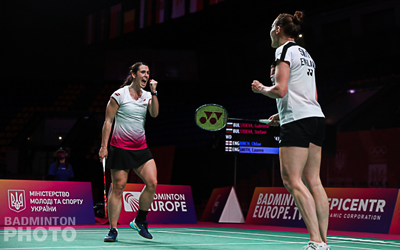 The 2021 European Championships will certainly be remembered for a long time.

Not only were the final day medals delivered via drones, there were only three finals instead of five after two stars tested positive for the coronavirus.

It was a successful week for our English contingent, with three medals going home on the plane with the team.

Smith bounced back and returned to court to team up with Chloe Birch in the women’s doubles final where they faced the number one Bulgarian sisters Stoeva.

We also won a bronze medal thanks to Ellis and Chris Langridge in the men’s doubles event.

Ellis said: â€œOverall I’m happy with a good work week; disappointed not to have won gold. However, after a very difficult preparation, we must be very happy with what we have achieved.

Smith added, â€œThere are a lot of positives to take from last week.

â€œOur performances in women’s doubles showed above all a rise in level, where we gained some key points of Olympic qualification.

â€œI’m disappointed that I couldn’t win any of the finals, but I feel sharper and more at home with each tournament and motivated to push again as we get closer to Tokyo.â€

There was also an English interest in the men’s singles, with Alex Lane falling to French seventh seed Toma Junior Popov, 21-9, 21-13.

On the day of the quarter-finals we had a lot of interest in the men’s doubles as Matt Clare and Max Flynn put in a strong performance against future champions Ivanov and Sozonov.

Fourth seeded Ben Lane and Sean Vendy had a longer encounter against German duo Mark Lamsfuss and Marvin Seidel, just ahead of 21-15, 17-21, 21-19 in just over an hour.

The team will now resume training ahead of their final two Olympic qualifying events in Malaysia and Singapore later this month.

Create a practice from scratch and maintain it during a pandemic

Ukraine and Russia: NATO should clarify its deterrent approach, while it still can