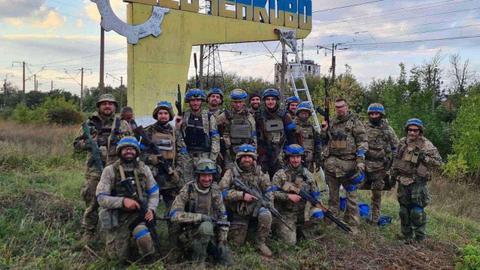 Russia is abandoning its main stronghold in northeastern Ukraine in a sudden collapse of one of the main front lines of the conflict after Ukrainian forces made a rapid advance on the 199th day of fighting.

The Ukrainian army recaptured around 2,000 square kilometers of territory in September, President Volodymyr Zelenskyy announced, adding that the Russian army was doing the right thing by fleeing the counter-offensive.

“At the moment, since the beginning of September, about 2,000 kilometers have been freed up,” Zelenskyy said in his evening address.

“In recent days, the Russian army has shown us its best (side) – its back,” Zelenskyy added. “After all, it is a good choice for them to flee. There is no place in Ukraine for the occupiers. There never will be.”

The Russian-backed chief administrator of Russian-controlled parts of Ukraine’s Kharkiv region has recommended that all its residents evacuate to Russia “to save lives”, according to Russian news agency TASS.

Vitaly Ganchev said officials were ready to provide the refugees with food, heating and medical care, according to TASS.

The Russian Defense Ministry said it was withdrawing troops from Izyum and Balakliia – crucial military supply hubs in the Kharkiv region – as Ukraine claimed rapid advances.

Moscow has announced it is withdrawing its forces in Ukraine’s eastern Kharkiv region, after kyiv said its troops had made significant gains in territory held for months by the Russian military.

The apparent withdrawal of Russian forces comes as Ukrainian troops said they entered the city of Kupyansk in Kharkiv, with military observers saying the kyiv army had advanced further.

To achieve the goals of the special military operation for the liberation of Donbass, it was decided to consolidate the Russian troops stationed in the Balakliya and Izyum regions, in order to strengthen the efforts along the Donetsk front.

Russian air defense systems shot down 13 Ukrainian drones and destroyed five HIMARS missiles in the air, the ministry said, according to the official TASS news agency.

Ukraine is negotiating a $1.5 billion loan tranche from the US Export-Import Bank to buy natural gas, Ukrainian Prime Minister Denys Shmyhal wrote on Telegram in a summary of an appeal with US Treasury Secretary Janet Yellen.

Air Moldova had said it hoped to resume flights from Chisinau to Moscow from October 1.

Moldova has suspended air links with Russia following its February 24 offensive against Ukraine.

Our colleague Rahul Radhakrishnan is aware of the Ukrainian counter-offensive pic.twitter.com/V0nHXppIib

Ukraine breaks through front line in east, near key town

Britain’s Ministry of Defence, in an online briefing on Saturday, said it believed the Ukrainians had advanced up to 50 kilometers (30 miles) south of Kharkiv in northeastern Ukraine .

“The Russian forces were probably taken by surprise. The sector was only lightly held and Ukrainian units captured or surrounded several towns,” the British military said.

Ukrainian officials have shared photos showing troops hoisting the nation’s flag over the city housing the main rail hub that supplied Russian forces in northeastern Ukraine, as a collapse of the Russian front line threatened to turn into a rout.

Natalia Popova, adviser to the head of the Kharkiv regional council, shared pictures of troops outside Kupyansk city hall on Saturday with a message: “Kupyansk is Ukraine. Glory to the Armed Forces of Ukraine.”

The town, where rail lines to eastern Ukraine converge on Russia’s main line, would be the most important prize to date in a stunning Ukrainian breakthrough this week, after the Russian front line shattered. collapsed near the city of Kharkiv.

#Kupiansk got his real flag bag. This city in #Kharkiv region was used by #Russia as a strategic military base to supply command points in other occupied cities. This morning #Ukraine the army put a stop to that. pic.twitter.com/HChCzFnvgA

A ministry statement on Saturday did not reveal the departure points or destinations of the ships.

Plans were also finalized for inspections of 12 vessels on Saturday, the ministry added.

German Foreign Minister Annalena Baerbock arrived in Kyiv for a surprise visit, which she said would demonstrate Berlin’s unwavering support for Ukraine in its battle against Russia.

“I went to Kyiv today to show that they can continue to count on us. That we will continue to support Ukraine for as long as necessary with arms deliveries and with humanitarian and financial support,” he said. Baerbock said in a statement. Saturday.

This is his second trip to Ukraine and comes a week after Ukrainian Prime Minister Denys Shmygal traveled to Berlin where he reiterated kyiv’s call to arms.

#Ukraine soldiers sing the national anthem in unity as they regain control of more territory. 30 towns liberated in #Kharkiv region and control regained over more than 2.5K km² pic.twitter.com/Qc7k2hvPZa

Rebuilding Ukraine after the devastation caused by the Russian offensive will cost around $349 billion, according to a report.

But this figure, which altogether represents 1.5 times the size of the Ukrainian economy, is considered a minimum and is expected to increase in the coming months as the war continues, according to the joint assessment of the Ukrainian government, of the European Commission and the World Bank.

Physical damage alone inflicted since the offensive in late February to June 1 has already totaled $97 billion, according to the report.

Zelenskyy: Ukrainian army takes over 30 settlements in the northeast

Ukrainian President Volodymyr Zelenskyy said his country’s forces had regained control of 30 settlements from Russian troops in the northeast region of Kharkiv.

“To date, the Ukrainian armed forces have liberated and taken control of more than 30 settlements in the Kharkiv region,” he said.

Ukrainian President Volodymyr Zelenskyy has met with the head of Turkish defense company Baykar and said the company will set up a factory in Ukraine to build unmanned aerial vehicles.

Baykar’s Bayraktar TB2 drone has been extremely popular in Ukraine, where it has helped destroy many Russian artillery systems and armored vehicles.

“We discussed the details of the construction of Baykar’s plant in Ukraine and the production of new products using Ukrainian components,” Zelenskyy said in an online post after meeting Baykar’s chief executive Haluk Bayraktar. in Kyiv.

A video posted online shows Zelenskyy presenting Bayraktar with the Ukrainian Order of Merit. In return, Zelenskyy received a traditional embroidered Ukrainian shirt with a drone.

The US Treasury has issued new guidance on a proposed Western price cap on Russian oil exports, saying shipping service providers would not be held liable for false price information provided by buyers and sellers of crude Russian.

The Treasury said in the guidelines that those who buy Russian crude at prices above the cap who knowingly provide false documents could be investigated for violation of sanctions.

He said governments participating in the cap would share this information to help monitor it.

The price cap plan agreed by rich G7 countries calls on participating countries to deny insurance, financing, brokerage, shipping and other services to oil cargoes priced above a price cap yet to be determined on crude oil and petroleum products.