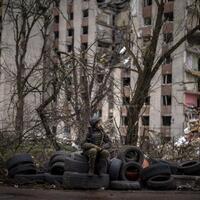 The top US diplomat and defense chief was due to make his first wartime visit to kyiv on Sunday since Russia invaded Ukraine two months ago, with fierce battles raging in the east of the country.

The trip by Secretary of State Antony Blinken and Secretary of Defense Lloyd Austin comes as the war enters its third month with thousands dead and millions displaced.

A series of European leaders have already traveled to Kyiv to meet President Volodymyr Zelensky and underline their support, but the United States – a major funding and arms donor – has yet to send a senior officials.

In his daily video address Saturday night, Zelensky said he was preparing for “tomorrow’s important talks with US partners.” The State Department declined to comment on the highly sensitive trip of two of President Joe Biden’s top cabinet members.

Their visit comes as Russian forces show no sign of letting up in their attacks and after a missile strike on the southern city of Odessa that Ukraine says killed eight people, including a baby.

“Among those killed was a three-month-old baby girl. How did she threaten Russia? It seems that killing children is just a new national idea of ​​the Russian Federation,” Zelensky said.

He also accused Russia of being a terrorist state and acting like Nazis in the devastated port city of Mariupol, which has been devastated by weeks of heavy shelling.

The latest of many attempts to evacuate civilians from Mariupol failed on Saturday, and a unit of beleaguered Ukrainian fighters locked in tunnels under a sprawling steelworks appeared in increasingly desperate straits.

Zelensky also issued a new call on Saturday for a meeting with his Russian counterpart Vladimir Putin “to end the war”.

“I think whoever started this war will be able to end it,” Zelensky said, adding that he was “not afraid” to meet the Russian leader, who attended an Orthodox Easter service in Moscow.

But he again stressed that kyiv would abandon talks with Moscow if its troops in Mariupol were killed.

“There is no justice or logic in this order,” he said.

“The war is in Ukraine, there are no bodies on the streets of Moscow. It would be logical to go to Ukraine first, to see the people there, the consequences of the occupation,” he said. he declared.

About 200 residents gathered at a designated evacuation point in Mariupol on Saturday but were “dispersed” by Russian forces, city official Petro Andryushchenko said on Telegram, adding: “The evacuation was thwarted.”

He said others were told to board buses heading to places controlled by Russia.

Mariupol, which the Kremlin claims to have “liberated”, is at the heart of Russia’s war plans to forge a land bridge to Russian-occupied Crimea – and possibly beyond, to Moldova.

In its latest analysis, the US Institute for the Study of War said Russian forces did not appear to be stopping to refit or mass their troops as they redeployed and were likely to step up their offensives.

“Russian forces will likely increase the scale of offensive ground operations in the coming days, but it is too early to say how quickly they will do so or how large these offensives will be,” he said.

Ukraine says hundreds of its forces and civilians are entrenched inside the Mariupol steel plant. kyiv has repeatedly called for a ceasefire to allow civilians – many of whom are barely surviving with little or no access to food or water – to get out safely.

But on Saturday, a Ukrainian presidential adviser, Oleksiy Arestovich, said Russian forces had resumed airstrikes on the factory.

“Our defenders are holding on despite the very difficult situation and are even carrying out counter raids,” he said.

The Russian Defense Ministry said it targeted a major foreign arms depot near Odessa, attacks that upset the relative calm the city has enjoyed since the start of the war.

The ministry also accused Ukrainian special services in Odessa of preparing a “provocation with the use of toxic chemical substances” which could then be blamed on Russia.

Western powers have accused Russia in the past of making such charges as a cover or diversion for attacks its own forces are planning.

The latest fighting came a day after a senior Russian military officer said he was aiming to take full control of the eastern Donbass region and southern Ukraine.

Russian forces, which withdrew from around kyiv and northern Ukraine after being frustrated in their attempts to take the capital, already occupy much of Donbass and the south.

After changing their strategic orientation to southern and eastern Ukraine, Russian forces left behind a trail of destruction around Kyiv, including the suburban town of Bucha.

Tania Boikiv, 52, said Russian troops took her husband from their home in Bucha, held him for two weeks and then beat him to death as they retreated.

“The most terrible thing in my life is that my husband, my beloved, is gone,” she told AFP. “I don’t know what could be worse.”

Putin has unleashed a new anti-colonial struggle. This time, Moscow is the target | Nick Cohen