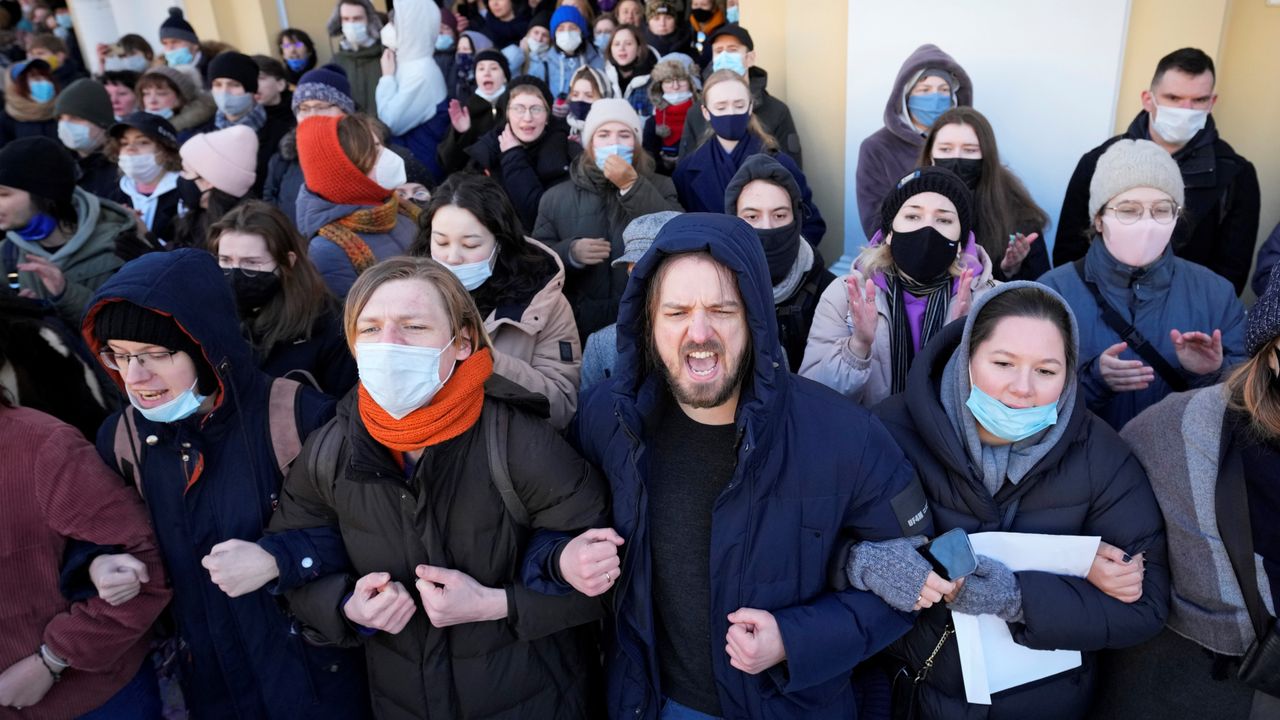 The Russian Socialist Movement (RSM) and the Ukrainian group Sotsialnyi rukh (Social Movement, SR), a SYRIZA-style formation, issued a joint statement on the Pabloite International Viewpoint website calling for an escalation of the proxy war of the NATO in Ukraine against Russia. .

The statement “Against Russian Imperialism” is explicitly addressed to anyone who refuses to side with US imperialism in the conflict with Russia over Ukraine.

“It’s Putin, not NATO, who is waging war on Ukraine,” he said. “That is why it is essential to shift our focus from Western imperialism to Putin’s aggressive imperialism, which has an ideological and political base in addition to an economic base.”

While the RSM and SR proclaim that “Putin’s aggression is difficult to explain rationally”, it was in fact deliberately provoked by decades of NATO expansion on Russia’s borders and, in particular, the heavy intervention of imperialism in Ukraine.

In 2014, the United States supported the overthrow of the Yanukovych government which had rejected an association agreement with the European Union. The RSM supported the putsch at the time and even justified collaboration with the neo-fascist forces that played the main role in its realization.

Since then, Ukraine has set itself up as an attack dog against Russia. The country’s army was massively expanded and armed with NATO weapons. The new military strategy adopted by the government in kyiv in March 2021 left no doubt that this military build-up was in preparation for a war with Russia: it openly proclaimed that “recapturing” the Black Sea peninsula, the Crimea and the Donbass, was kyiv’s military objective. . Throughout 2021, the United States and NATO have done everything to reinforce these reckless provocations, openly supporting the “Crimean platform” and staging one major NATO exercise on the Russian border after another. .

In this context, the invasion of Ukraine by the Putin regime can explain: it is a desperate and failed attempt to defend the national interests of the Russian oligarchy and to somehow force the imperialist powers to the negotiating table.

One can oppose the invasion and Putin’s regime without aligning themselves behind US imperialism, from the standpoint of revolutionary internationalism, fight to unify workers in Russia, Ukraine, across Europe and the United States in a common struggle against imperialist war and for the overthrow of capitalism.

It is precisely against this truly left opposition to the war that the declaration of the RSM and SR is inscribed.

The Pabloites do express their support for NATO’s military build-up against Russia. Their statement explicitly rejects calls to ‘demilitarize Eastern Europe’, calling them ‘naive’ as this ‘would only appease Putin and make Eastern European countries vulnerable to aggression. of Putin. The rhetoric of NATO enlargement obscures Putin’s desire to divide spheres of influence in Europe between the United States and Russia.

In other words, the position of the RSM and the SR is not only that Eastern Europe must remain a massive military base of operations for the NATO powers, above all the United States , but that the division of the region into “spheres of influence” must be resolved. in favor of NATO.

The statement also provides cover for imperialism’s fascist shock troops in the region. He describes the neo-Nazi Azov Battalion, which openly places itself in the tradition of Nazi collaborationist, Ukrainian nationalist forces as “a problem”, but then, absurdly, claims that “unlike 2014, the far right is not playing a leading role”. in today’s war, which has become a people’s war.

This is a plain and simple lie. The neo-Nazi Azov Battalion and similar far-right paramilitary formations – which in 2020 made up 100,000 soldiers, around 40% of Ukraine’s armed forces – are at the heart of the military and political operations of imperialism and the kyiv regime .

The Azov Battalion, now fully integrated into the army, forms the backbone of the Ukrainian military operation against Russian forces in Mariupol, a city of key strategic importance. Members of the Azov battalion were among the first to enter Bucha near kyiv. Their commanders receive “hero of Ukraine” orders from the government, and President Zelensky recently even invited a member of Azov to accompany him on his official trip to Greece.

Additionally, with open state support, the Azov Battalion recruits far-right forces from around the world who use the war in Ukraine as a training ground where they can network and gain combat experience with security systems. advanced weapons of NATO.

Not only do the RSM and SR cover up this process, they even advocate for its escalation.

Their statement explicitly calls for more NATO weapons for Ukraine, many of which end up in the hands of fascist formations like the Azov Battalion. For the Pabloites, the more than $2.6 billion in NATO weapons delivered by the White House alone since the start of the war is not enough.

Claiming that the EU has already delivered weapons to Russia in the past, they write: “The discussion on whether the weapons sent to the region end up in the right or wrong hands seems a little late. They are already in the wrong hands and EU countries would only be making amends for their past wrongs by supplying weapons to Ukraine.

In other words, the Pabloites’ “opposition” to “Russian imperialism” translates into the demand for the EU and NATO to deliver more weapons into the “best hands” of military and fascist forces. Ukrainians.

The statement also identifies as a specific request the supply to Ukraine of “air defense systems”, i.e. advanced weapons capable of shooting down Russian planes. This request, which was published on April 9, was published the same weekend that the American and European powers announced that they would do just that, by supplying Ukraine with weapons that would allow it to strike territory in Russia. The Kremlin has long warned that it could view such a move as direct NATO involvement in the war and react accordingly.

In order to somehow frame this right-wing tirade, which reads like a compilation of NATO talking points, as ‘left-wing’, the RSM and SR insist that Russia is an ‘imperialist’ country. . Making no serious attempt to substantiate this assessment, they merely point to the “rhetoric” of Putin’s regime and its nationalism. This argument has nothing in common with the Marxist understanding of imperialism and can provide the basis for designating virtually any country in the world that opposes imperialism as itself “imperialist”.

If this position is both theoretically bankrupt and an act of political quackery, historically it is a logical extension of the Pabloites’ hostility to the 1917 socialist revolution and their support for Stalinist reaction. against the revolution, which resulted in the restoration of capitalism and the destruction of the USSR in 1991.

Pabloism historically originated in the aftermath of World War II as a revisionist tendency within the Fourth International. Amid the temporary re-stabilization of capitalism and the establishment of “buffer states” by the Soviet bureaucracy in Eastern Europe, the Pabloites denied that the working class could play an independent revolutionary role and assigned a progressive role to the Stalinism.

On this basis, they advocated the liquidation of the Fourth International in the Stalinist bureaucracies and the social democratic parties, asserting that the struggle for socialism could only be achieved by pushing the bureaucracies “to the left”. In 1985-1991, the Pabloites aligned themselves behind the push of the bureaucracy towards the full restoration of capitalism, presenting this social counter-revolution as a progressive, democratic event and the realization of the “self-reform” of the bureaucracy that they had advocated.

Thirty years later, Russia’s position in the world economy is defined above all by its role as a supplier of raw materials for the more advanced capitalist countries, a mark not of an “imperialist” power, but of a country semi-colonial. Not content with only the limited access they were granted to Russia’s vast raw materials and social resources after 1991, the imperialist powers are now seeking to completely subjugate Russia through a combination of military and economic pressure on Ukraine and an operation regime change in Moscow.

Having completed their integration into imperialist and bourgeois state politics, the Pabloites now lend their full support to these operations. Far from representing anything resembling left-wing politics, they speak for layers of the upper middle class who see their future in a capitalist Ukraine and a “Putin-free” capitalist Russia, which would be controlled by pro-oligarchs. -Americans. and integrated into NATO. That this means not only the imperialist arming and strengthening of fascist forces in Ukraine and around the world, but the very real possibility of a nuclear escalation of the conflict is not the least concern for these layers.

Any genuine anti-war movement in the working class must be built in irreconcilable opposition to these right-wing forces and to the long history of the Trotskyist movement’s struggle against Stalinism and Pabloism.

May 1, 2022: For working class unity against imperialist war!

David North, Chairman of the WSWS International Editorial Board, Appeals to Online May Day Rally: ‘The Fate of Humanity Must Not Be Left in the Hands of a Money-Crazed, Warmongering Ruling Class’ .