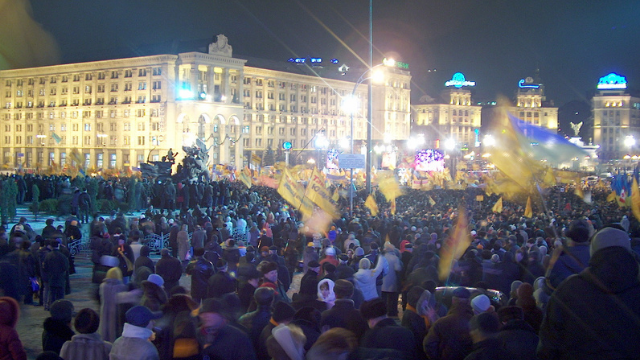 Russia and its fellow travelers present the 2022 war as a consequence of American-inspired “coups” in Ukraine. But there were no “coups”.

One of the most popular Russian propaganda arguments, which is unfortunately bought off by a number of gullible Westerners, is that everything that has happened in Ukraine since 2014, including the 2022 invasion, stems from “coups” of 2004 and 2014, where allegedly the United States twice orchestrated the ousting of the legitimately elected President Viktor Yanukovych.

This argument is false. I will examine it in detail in a series of four articles, which will also address related myths.

In fact, claims that the United States staged “coups” in Ukraine date back to the first Maidan revolt in 2004. The 2004 and 2014 revolts are different, although both were directed against the same pro-Russian politician, Yanukovych. To distinguish between the two Maidan revolts, the second is usually called Euromaidan, and the first is called the Orange Revolution.

On November 21, 2004, the second round of the Ukrainian presidential elections opposed Prime Minister Viktor Yanukovych and the leader of the opposition Viktor Yushchenko. Yanukovych had a reputation for being pro-Russian, and Russia certainly preferred his victory, even if Russia was not the only issue in the campaign. After most of the media began commenting on Yushchenko’s victory based on exit polls and projections, the Central Election Commission surprisingly announced that Yanukovych had won. Putin immediately congratulated Yanukovych on his election.

At the invitation of the Ukrainian government, of which Yanukovych was Prime Minister, the OSCE (Organization for Security and Cooperation in Europe) had sent more than 500 observers control the elections. I myself worked at the OSCE and consider any attempt to portray it as a puppet of the United States ridiculous. Russia, Belarus and the pro-Russian Central Asian republics are all OSCE participating States, and the 2004 observers came from 46 different countries.

OSCE observers refused to certify the fairness of the November 21 second round of elections and concluded that there had been massive voter fraud. For example, in one of the strongly pro-Yanukovych districts of Donbass, the turnout was 127%. Turnout rates approaching 100% are already suspect in any country, but 127% is a world record and clear evidence of fraud.

To protest election fraud, many Ukrainians took to the streets in what was called the Orange Revolution. Certainly also because of these protests, the Ukrainian parliament on December 1 adopted a resolution against Yanukovych.

The opposition had also appealed to the Supreme Court, which on December 3 ruled there was strong evidence of electoral fraud, but said it was unable to declare Yushchenko the winner. Instead, the Supreme Court ordered a repeat run-off, again inviting OSCE observers. The new second-round election took place on December 26. It was certified fair by the OSCE and gave Yushchenko 51.99% of the vote to Yanukovych’s 44.20%. The results were similar to the November 21 media projections.

Yanukovych claimed that these projections stemmed from media prejudice against him. It may be, but the OSCE did not rely on the discrepancy between media projections and results to declare the November 21 elections fraudulent. He relied on what his own observers had seen.

Was there a first coup against Yanukovych in 2004? Not really. Just as would happen in the United States and most other democratic countries, the Supreme Court of Ukraine had the power to rule on the validity of the elections and it ruled that the second round should be repeated due to the frauds perpetrated November 21. .

Was the Orange Revolution organized by the United States? The answer is no. Protests against voter fraud were spontaneous and widespread. The fact that the United States and the European Union refused to recognize Yanukovych as president-elect may have encouraged the protesters and even the Parliament and the Supreme Court, but did not provoke their protests and their decisions.

Rarely mentioned is also Russia’s role in backing pro-Yanukovych protests in Donbass and Crimea, its electoral strongholds, where calls for separatism have begun to sound. Yanukovych supporters from these regions traveled to Kyiv to oppose the Orange Revolution, but were quickly outnumbered by anti-Yanukovych protesters, estimated at one million.

The Orange Revolution in Ukraine has been studied as the model for the “color revolution”, although it was preceded by the Rose Revolution in Georgia in 2003, and there were precedents in Slovakia and Serbia. Russia and China have described the “color revolutions” as American plots to defeat governments friendly to them. They found support for their critique of “color revolutions” in books and articles by Western journalists. Russia also tried to adopt the same strategy. The protests in Crimea and Donbass in 2014, the so-called “Russian Spring” which we will return to in another article in this series, have been described as a Russian-fuelled “counter-color revolution”.

There is considerable scholarship on color revolutions. While considering foreign influences—both by the West and by Russia (and China, when the Color Revolutions broke out in Central Asia)—the studies have largely reconstructed the Color Revolutions as stemming from the expectations of democracy who have been betrayed by governments in power through corruption and electoral fraud. Very few revolutions in history have happened without the support of some foreign countries – and the hostility of others. The specificity of the Color Revolutions was not American support and Russian-Chinese hostility. It was their rooting in a specific post-Cold War situation, in countries where democracy was promised but not achieved.

Color revolutions generally occurred in semi-authoritarian and at the same time semi-democratic systems, which allowed a limited but real development of an independent civil society, including NGOs and a relatively free university and press. Obviously, there were differences between color revolutions in different countries. Typically, in the case of the 2004 Orange Revolution, civil society in big cities took to the streets to protest against fraud in elections that had not been conducted according to democratic standards. Western support, coupled with Russian hostility, spurred the Ukrainian Color Revolution, but it did not create it.