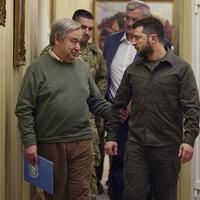 Russia confirmed on April 29 that it carried out an airstrike on kyiv during a visit by the UN chief, the first such attack on the Ukrainian capital in nearly two weeks and one that killed a journalist.

Vera Gyrych, producer of US-funded Radio Free Europe/Radio Liberty, died when a Russian missile slammed into the house where she lived in Kyiv, the media group said of the strike.

The Russian Defense Ministry said it deployed “high-precision, long-range aerial weapons” which, it added, “destroyed the production buildings of the Artyom missile and the space enterprise in Kyiv”. .

Ukrainian President Volodymyr Zelensky said the strikes, which immediately followed his talks with Guterres, were an attempt by Russia “to humiliate the UN and everything the organization stands for”.
Earlier in the day, UN Secretary General Antonio Guterres visited Bucha and other Kyiv suburbs where Moscow allegedly committed war crimes. Russia denies killing civilians.
Germany denounced the “inhumane” attack which showed Russian President Vladimir Putin had “no respect for international law”.
In a residential area of ​​kyiv, AFP correspondents saw a burning building and black smoke billowing in the air after Russian strikes.
“I heard the sound of two rockets and two explosions. It was a sound like an airplane in flight, then two explosions with an interval of three to four seconds,” Oleksandr told AFP. Stroganov, 34 years old.
Mayor Vitali Klitschko said there were “two hits in the Shevchenkovsky district”, including one hitting “the lower floors of a residential building”.

“It’s a war zone, but it’s shocking that it happened near us,” said Saviano Abreu, spokesman for the UN humanitarian office who was traveling with António Guterres, adding that the delegation was safe.
Guterres, who arrived in Kyiv after talks in Moscow with Putin, had called the war “evil” after visiting Bucha and asked the Kremlin to cooperate with an International Criminal Court investigation into the charges.
Ukrainian prosecutors said they identified more than 8,000 alleged war crimes cases and opened investigations into 10 Russian soldiers for alleged atrocities in Bucha, where dozens of plainclothes bodies were found after the retreat from Moscow.
The cases involve “murders of civilians, shelling of civilian infrastructure, torture” and “sex crimes” reported during Russia’s occupation of various parts of Ukraine, Prosecutor General Iryna Venediktova told a German broadcaster.
In Washington, President Joe Biden on Thursday urged U.S. lawmakers to approve a massive $33 billion aid package and proposed new laws to allow luxury assets stripped from Russian oligarchs to be used to compensate the Ukraine of the damage inflicted since the invasion of Moscow on February 24.
“The cost of this fight is not cheap. But giving in to aggression will cost more if we let it happen,” said Biden, whose announcement was hailed by Zelensky as an “important step.”
Three months after the start of an invasion that failed in its short-term goal of seizing kyiv, Russia is now stepping up operations in the separatist region of eastern Donbass and tightening its grip around the port city strategic devastation of Mariupol.
Ukrainian authorities said they planned to evacuate civilians from the beleaguered steelworks in Azovstal, Mariupol’s last stronghold where hundreds of people have taken refuge with Ukrainian troops, on Friday.

In an early morning statement on Telegram, plant defenders said shelling hit a field hospital inside the plant, causing it to collapse.
“Among the service members already injured, there are dead, wounded and recently injured,” the statement said without providing specific casualty figures.
In Washington, Biden pushed back against increasingly strident claims by Russian officials that Moscow was fighting the entire West, rather than just Ukraine.
“We are not attacking Russia. We are helping Ukraine defend against Russian aggression,” Biden said.
The $33 billion package sought by Biden represents a significant increase from previous demands.
The bulk – $20 billion – would be weapons and other security aid, while $8.5 billion would be economic aid.
A senior US official, speaking on condition of anonymity, said the spending package would keep Ukraine’s government and military in place until early October.
While Biden said the United States was sending 10 anti-tank weapons for every Russian tank, the commander of Ukraine’s air force said his country’s anti-aircraft systems were incapable of hitting higher-altitude bombers.

“We need medium and long-range anti-aircraft systems” and “modern fighters,” said Mykola Olechchuk.
Meanwhile, Britain said it was deploying around 8,000 troops for exercises across Eastern Europe in a show of Western allies’ resolve against Russian aggression.
With the war claiming thousands of lives, kyiv admitted that Russian forces had captured a series of villages in the Donbass region.
The first phase of the Russian invasion failed to reach kyiv or overthrow the government after encountering fierce resistance reinforced by Western weapons.
The Russian campaign has since refocused on seizing the east and south of the country while using long-range missiles against western and central Ukraine.
Nearly 5.4 million Ukrainians have fled their country since the invasion and more than 7.7 million others are internally displaced, UN estimates, as IOM appeals $514 million to help them.
“We have only one hope left: to return home,” said Galina Bodnya, a retiree from the southern town of Zaporizhzhia.