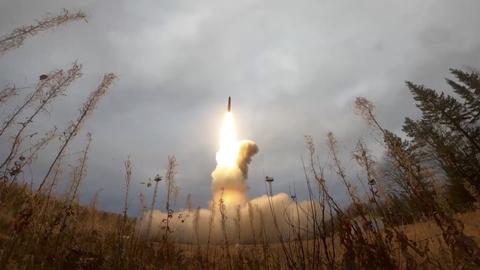 Russia’s Putin is urging his government to cut red tape to produce enough weapons and supplies to fuel the fighting in Ukraine, where a Western-armed Ukrainian counteroffensive has halted the Russians, as fighting enters its 245th day.

Russian President Vladimir Putin has overseen exercises by the country’s strategic nuclear forces involving multiple practice launches of ballistic and cruise missiles, in a show of force amid heightened tensions with the West over the conflict in Ukraine.

Defense Minister Sergei Shoigu told Putin that the exercise was intended to simulate a “massive nuclear strike” by Russia in retaliation for a nuclear attack on the country.

During the Russian exercises, a land-based Yars intercontinental ballistic missile was tested from the northern Plesetsk launch site. A Russian nuclear submarine in the Barents Sea launched a Sineva ICBM at the Kura firing range in the far east of the Kamchatka Peninsula.

The Polish government is closely monitoring Russia’s movements in neighboring Ukraine to prepare for the Kremlin’s potential use of nuclear or chemical weapons, the central European country’s deputy defense minister said.

Marcin Ociepa told Polish state broadcaster TVP1 that the government believes Russian President Vladimir Putin “could use nuclear or chemical weapons” because his country’s forces are struggling in Ukraine and Poland “needs to be prepared. to all scenarios.

US sanctions target corruption and Russian operations in Moldova

The United States has imposed sanctions on individuals and entities involved in what it described as malicious Russian influence operations in Moldova as well as systemic corruption in the small Eastern European country.

Those sanctioned, a mix of Russian and Moldovan officials, include oligarchs “widely credited with capturing and corrupting Moldova’s political and economic institutions and those acting as instruments of Russia’s global influence campaign”, it said. the US Treasury Department said in a statement.

The designations also include former Moldovan member of parliament Vladimir Plahotniuc, who manipulated “key sectors of the Moldovan government, including law enforcement, electoral and judicial sectors”, the statement said. There was no immediate comment from Russia or Moldova.

Crouching in a weed-choked irrigation canal, hidden from prowling enemy drones by overhanging trees, the Ukrainian soldier dismissed media reports that reclaiming the Russian port city of Kherson would be a walk in the park.

“They’ve got good defensive lines with deep trenches, and they’re sitting deep underground,” Vitalii said, holding an assault rifle and nodding towards the treeline where his enemies were bunked. “The Ukrainian armored forces must destroy these defensive lines.”

He and other members of the unit occupying positions north of Kherson that they saw Russian troops reinforcing their lines, aided by newly mobilized conscripts.

They reinforce their positions, in particular on the flanks. They think the deeper they go, the safer they’ll be.

At least 70,000 people have left their homes in Kherson province, southern Ukraine, in the space of a week, a Moscow-backed regional official said.

“I’m sure more than 70,000 people have left in a week since the crossings were organised,” Vladimir Saldo told a regional TV channel, referring to efforts by pro-Kremlin authorities in the region to move the inhabitants to the areas under Russian control on the left bank of the Dnipro river.

He added that the number could be higher as people could have used their own boats to cross the river instead of organized ferries.

Recent Russian attacks on critical infrastructure in Ukraine have put a strain on the country’s recovery efforts. TRT World’s Obaida Hitto has more of the capital Kyiv pic.twitter.com/DkN4wEBHru

A missile strike in the eastern Ukrainian city of Dnipro killed two people and injured four as Russian strikes on various cities in Ukraine continued.

“A Russian missile that flew into the Dnipro killed two people. According to the information specified, four are injured. They are two women and two men. Everyone is in the hospital. Three are in poor condition,” Dnipropetrovsk Governor Valentin Reznichenko said on his Telegram account.

Russian Defense Minister Sergei Shoigu had a phone call with his Indian counterpart and raised Russia’s concerns over the possible use of a “dirty bomb” by Ukraine, the Ministry of Defense said. Shoigu.

This follows a series of calls Shoigu has held since Sunday on the same subject with NATO defense ministers.

Ukraine and its Western allies have dismissed Russia’s claim that kyiv is preparing to use a radioactive ‘dirty bomb’ and expressed concern that Moscow is using it as a pretext for further escalation of the war .

Ukraine’s top presidential aide discussed the increasing intensity of Russian airstrikes on Ukrainian cities with US, UK and French advisers.

Yermak added that he briefed the three advisers on the latest situation on the ground, as well as the increasing intensity of Russian strikes on Ukrainian cities and critical infrastructure with missiles and drones.

The Meloni government is Italy’s most right-wing administration since World War II and the former close ties between Moscow and two of its coalition partners have raised concerns among NATO allies.

German automaker Mercedes-Benz is set to sell its Russian assets to a local investor, Russia’s Industry and Trade Ministry has announced, becoming the latest automaker to exit since Moscow sent troops to Ukraine.

“Mercedes-Benz intends to sell its shares in Russian subsidiaries to a local investor,” Avtodom, the ministry said in a Telegram statement.

Ukraine is so strained that refugees are being urged not to return until winter due to power shortages. Obaida Hitto has more kyiv pic.twitter.com/qRVoTSjRwI

Ukrainian official: No side is preparing to withdraw to Kherson

A senior Ukrainian official predicted that the “heaviest of battles” will be fought in the strategic southern province of Kherson, partially occupied by Russia, and said that the army in Moscow was sinking to face the advance of the Ukrainian forces.

“With Kherson, everything is clear. The Russians are rebuilding, strengthening their grouping there,” said Oleksiy Ares tovych, adviser to Ukrainian President Volodymyr Zelenskyy.

“It means that no one is preparing to withdraw. On the contrary, the heaviest of battles will take place for Kherson,” according to Arestovitch, who did not specify when the battle could take place.

US President Joe Biden and Britain’s new Prime Minister Rishi Sunak agreed in talks to work together to support Ukraine, the White House has said.

The two leaders also reaffirmed the “special relationship” that exists between the United States and Britain, and said they would work together to advance global security and prosperity, the White House said in a reading of the conversation.

“Leaders agreed on the importance of working together to support Ukraine and hold Russia accountable for its aggression,” the statement said.