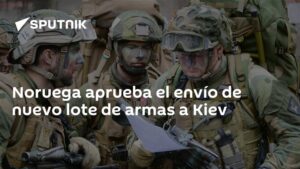 The government has approved the decision to send Mistral missiles, Bjorn Arild Gram, said in a statement the Norwegian Minister of Defense since April 12, who replaced Odd Roger Enoksen, forced to resign due to an alleged sex scandal.

Norway, a member of the North Atlantic Treaty Organization (NATO), recently announced its decision to send 4,000 anti-tank shells and other supplies to the Ukrainian government.

On this occasion, the monarchical state will deliver 100 Mistral anti-aircraft missiles, a weapon system designed in the 1970s that the Norwegian army plans to dismantle.

For its part, the Norwegian Ministry of Defense said that these missiles are still effective and could be useful to Ukraine, although it admitted that its armed forces would soon withdraw them from their arsenals.

On February 24, Russian President Vladimir Putin announced a special military operation in response to the request of the self-proclaimed people’s republics of Donetsk and Lugansk, in the face of the resurgence of attacks in kyiv.

Putin stressed that Moscow did not plan to occupy Ukraine and that the purpose of the operations was to demilitarize and denazify this country.