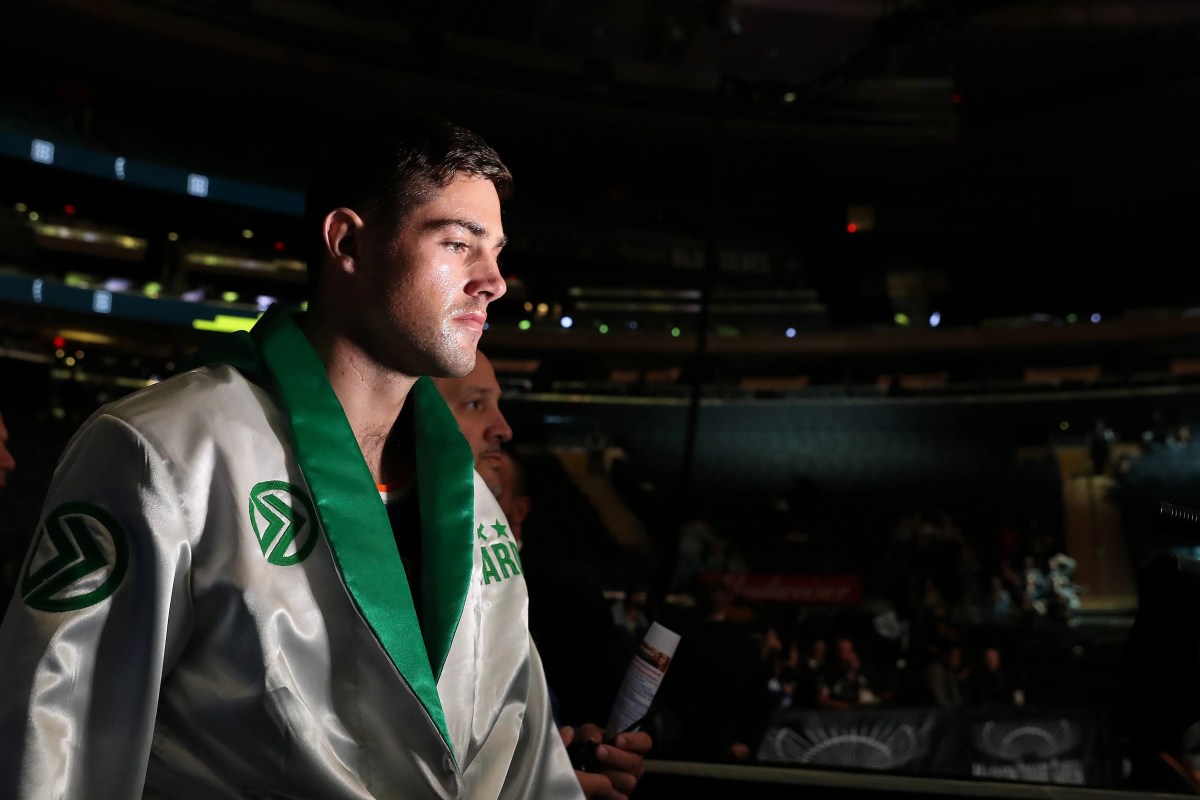 Joe Ward to show his worth at Madison Square Garden in December ahead of the Irish takeover of St. Patrick’s Day

JOE WARD is ready to show off his growth in The Garden.

The mid-heavyweight Moate will return to New York on December 11, with his opponent yet to be announced.

Ward dominated former UFC fighter Leandro Silva in six rounds on Long Island last week and will stay in the United States before his next game.

This is expected to take place at Madison Square Garden when Vasyl Lomachenko returns against Richard Commey.

And Ward (5-1) admits his own development is picking up speed ahead of a return to The Garden, where he made his debut – suffering from a horrific knee injury – two years ago.

He told SunSport: “As a successful amateur you think you’re going to go out there and wow people easily, but these guys are durable.

“I’m really starting to find my feet with the pros, can’t wait to show it off at Madison Square Garden.”

Ward and Lomachenko go back a long way.

The Irishman won his first of three European titles at just 17 in 2011 and trained alongside “The Matrix” before London 2012, which he himself narrowly missed.

He recalled: “Loma is a class act. We spent a few years in training camps down there to London and stuff like that.

“We would have been there in Kiev in training camps and you would have seen him training with some of our guys.

“I have always trained with him and also participated in a few tournaments with him, watching him fight.

“Just so that he can go back to the Garden and have another big fight there, what else would a fighter want?” To give them opportunities, for me it will be my third time so I’m lucky to have it.

“But as my trainer Jimmy Payne tells me, you’re not just lucky, you’re good enough.

“My record speaks for itself. I will become one of the most consistent male fighters Ireland has ever had.

“You look back from 2011 to 2019 when I turned pro I won major medals every time there was a major tournament.

“To do this for such a long time is obviously something I would be very proud of because it is not easy to go to a tournament and win a medal, as we have seen in the two previous world championships, it’s very difficult, it was just something that I could always produce when I got to the big major championships, world or European, I was always up to it.

“Unfortunately for me the Olympics were not to be and maybe it was a bit of my fault that I qualified too early in 2016 and took my foot off the pedal and didn’t just not doing the right things to put me in the best of conditions, a situation where I could give my best.

“But at the world championships, Europeans and multinationals, I was successful in most tournaments.

“By wearing this in the professional ranks, you certainly have a lot of conviction and a lot of confidence.”

THE OLYMPIC GAMES HAVE FALLS

Unfortunately for Ward, both of his Olympic experiences are marked with an asterisk.

He missed 2012 after losing to Turkish Bahram Muzaffer in the final qualifying match in Trabzon as he lost his first Rio 2016 match against Ecuador Carlos Andres Mina.

The recent McLaren report on corruption in amateur boxing suggests that the two have raised suspicion. Ward finally turned pro in 2019, leaving Emmet Brennan to take over as Ireland’s top lightweight.

Brennan went to the Olympic Games in Tokyo but lost his first fight against Uzbekistan Dilshodbek Ruzmetov.

Kelyn Cassidy of Waterford took over the 80kg weight for last month’s world championships in Belgrade.

After training with Ward beforehand, he was the only Irish boxer to win a fight, scoring two wins before falling in the quarterfinals.

Ward added, “Emmet, you really have to take the hat off to him. He immediately entered the deep end.

“He was beaten at the European Championships, got into the box-off and crossed the line. It was a huge achievement for Emmet just to get to the Olympics.

“Obviously he worked hard for this for so many years. It was nice to see him do that. Along with Kelyn, he definitely stole the show from the Irish team at the world championships.

“Kelyn had no overseas experience so it was a huge achievement for him to win a fight.

“I think it really benefited Kelyn in training, I think so.

“I stayed in touch with Kelyn throughout, he’s a nice guy. I guided him, explaining that he had the tools to go through with it, telling him to be calm and believe in himself.

“I watched his fights and I would give him a preview. We were talking back and forth, just through my experience of being around these situations, I think it really helped him.

“It meant a lot to him to have that voice, who had been there and who did.

“I think they were a young team that didn’t have a lot of experience but overall they got a lot out of it.

“Very good teams went there with high expectations but didn’t keep their promises because this is the World Championships and one of the toughest tournaments to win a medal. There are so many countries out there. , and this one was an open draw so the best could meet the best in the first fight. Winning any fight was always going to be tough. “

The IABA has endured a series of internal disputes, but Ward believes they need to pull themselves together for the sake of the fighters still dreaming of Paris 2024.

He said: “The most important thing is that they have to fix it all because we saw what happened before Rio as well, things happened with Billy Walsh.

“It’s just very important that they clean this up.

“The most important thing each of them should focus on is getting the most out of the fighters because without the fighters it just doesn’t happen.

“If they turn it on and everything is on the same page, Irish boxing will definitely improve.

“And as we have seen, it can be very successful. But they all have to be on the same page.

When it comes to his own career goals, staying injury free – and impressing when given the chance – is his priority as he pursues a title shot over the next 18-24 months.

After the December contest, he hopes to box in New York on St. Patrick’s Day weekend in March – when his Rio teammates Katie Taylor and Michael Conlan are set to fight for the world title in the Big Apple.

He added, “My team has big plans for me and Jimmy Payne and Joey Gamache are really helping me adjust to the pro style, having them around me is invaluable.

“I want to be busy and build good momentum, that’s key for me as I build my record towards a higher ranking.

“It’s about sticking to the plan and being ruthless when the time is right.

“Some of these guys that I fight with at this point in my career come into the ring to survive.

“For me, I have a pretty good idea when I’m over there – can I get him out of there?” And if I can’t, I know I have enough skill to make sure that I don’t risk getting caught, cut or suffered a silly injury.

Censorship and streaming – The Bell – Eng