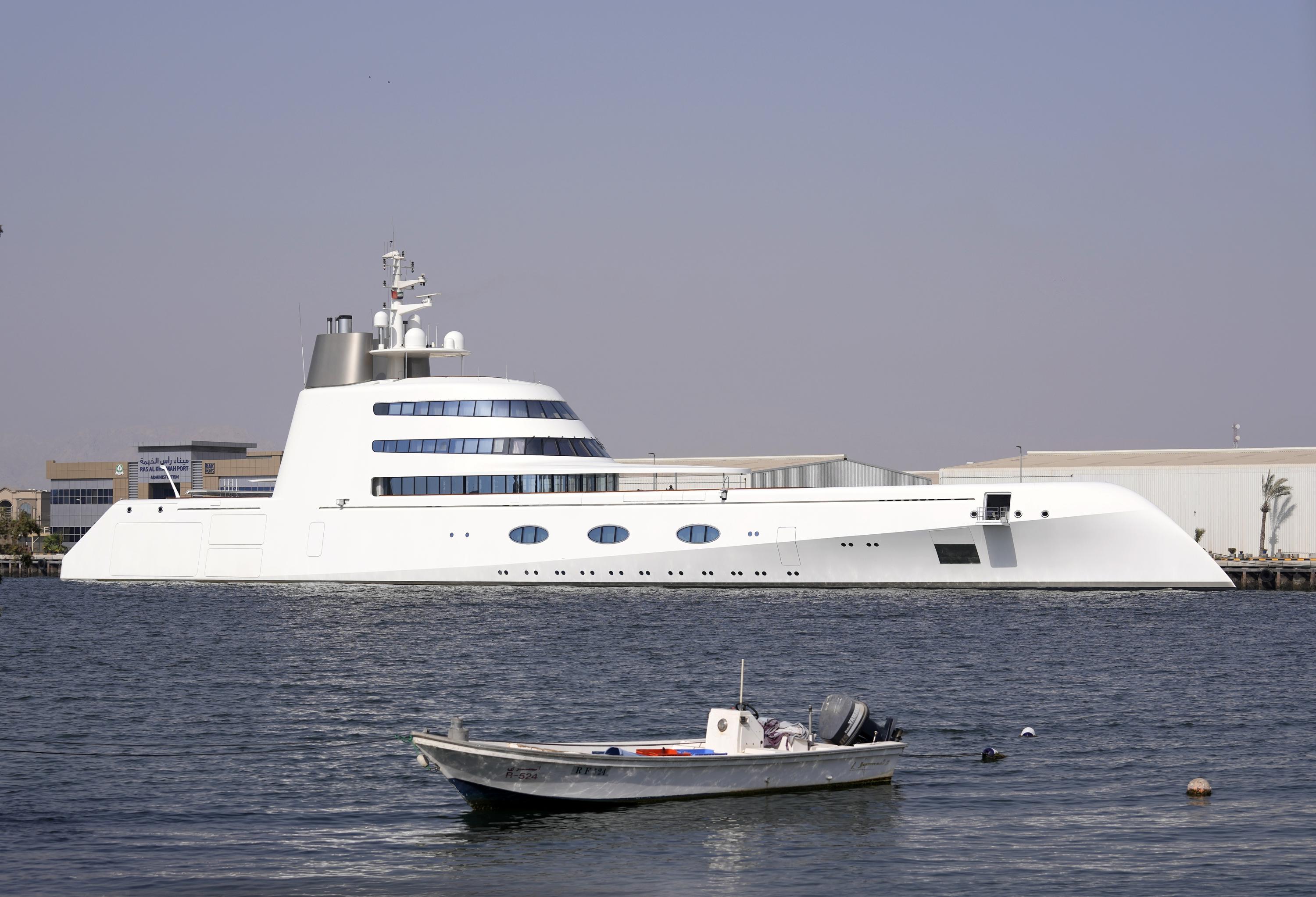 RAS AL-KHAIMAH, United Arab Emirates (AP) – In the dusty northernmost sheikhdom of the United Arab Emirates, where workers pass rustic teahouses, one of the world’s largest yachts sits in a harbor quiet – so far avoiding the fate of other luxury ships linked to sanctioned Russian oligarchs.

The display of lavish wealth is surprising in one of the UAE’s poorest emirates, a 90-minute drive from the illuminated skyscrapers of Dubai. But the presence of the 118-metre (387ft) Motor Yacht A in a cove in Ras al-Khaimah also shows the neutrality of the United Arab Emirates during Russia’s war against Ukraine. as the Gulf country remains a magnet for Russian money and its oil-rich capital sees Moscow as a crucial OPEC partner.

Since Russian tanks entered Ukraine, the seven emirates of the Emirates have offered refuge to Russians, both those despairing of their country’s future and the mega-rich worried about Western sanctions..

While much of the world has imposed sanctions on Russian institutions and allies of President Vladimir Putin, the Emirates have not. It also avoids open criticism of the war, which government records still call the “Ukrainian crisis.”

Motor Yacht A is owned by Andrey Melnichenko, an oligarch worth around $23.5 billion, according to Forbes. He once ran fertilizer producer Eurochem and SUEK, one of the largest coal companies in the world.

In March, the European Union included Melnichenko in a massive sanctions list against business leaders and others described as close to Putin. EU sanctions noted that he attended a Feb. 24 meeting that Putin held on the day of the invasion.

“The fact that he was invited to this meeting shows that he is a member of Vladimir Putin’s closest circle and that he supports or implements actions or policies that undermine or threaten the territorial integrity, the sovereignty and independence of Ukraine, as well as stability and security in Ukraine,” the EU said at the time.

Melnichenko resigned from the positions he held at the two major companies, according to the companies’ statements. However, he criticized Western sanctions and denied being close to Putin.

Melnichenko could not be reached for comment through his advisers.

Already, Italian authorities have seized one of his ships – the $600 million sailboat A. France, Spain and Britain have also sought to target superyachts linked to Russian oligarchs as part of a wider global effort to pressure Putin and his inner circle.

But the $300 million Motor Yacht A appears untouched so far. It was displaying an Emirati flag on Tuesday when Associated Press reporters observed the ship. Two crew members circled the deck.

The boat’s last recorded position on March 10 put it away from the Maldives in the Indian Ocean, just over 3,000 kilometers (1,860 miles) from Ras al-Khaimah. Planet Labs PBC satellite images analyzed by the AP show the vessel in the Ras al-Khaimah stream from March 17, a week later.

The Financial Times first reported on the ship’s presence in the United Arab Emirates.

Ras al-Khaimah authorities did not respond to a request for comment on the yacht’s presence. The UAE Foreign Ministry did not respond to questions about the vessel, but said in a statement to the AP that it takes “its role in protecting the integrity of the global financial system extremely seriously.” serious”.

But so far, the UAE has taken no such public action aimed at Russia. The country abstained in a UN Security Council vote in February condemning the Russian invasionangering Washington.

The neutral response may come “from the financial gain we’re seeing in Dubai in terms of new tourist arrivals and Russian efforts to move assets and buy property,” said Karen Young, senior fellow at the Washington-based Middle East Institute.

The flow of Russian money – both legitimate and shady – is now an open secret in Dubai, where lavish hotels and beaches are increasingly teeming with Russian speakers. State radio hosts happily describe a massive influx.

The United Arab Emirates has become one of the few remaining flight corridors from Moscow. The Emirati government has offered three-month multiple-entry visas on arrival to all Russians, allowing large companies to easily transfer their employees from Moscow to Dubai. Al Maktoum International’s private jet terminal at Dubai World Central has seen a 400% increase in traffic, the airport’s CEO recently told the AP.

Estate agents have reported renewed interest from Russians looking to buy property in Dubaiespecially in the skyscrapers of Dubai Marina and the villas of Palm Jumeirah.

For those wishing to settle in the UAE, purchasing a high-end property also qualifies for a visa.

“Business is booming right now,” said Thiago Caldas, CEO of Dubai-based real estate company Modern Living, which now accepts cryptocurrency to facilitate sales with new Russian customers. “They have a normal life and are not subject to restrictions.”

Caldas said requests from Russian customers in Dubai have increased more than 10-fold since the war, forcing his company to hire three Russian-speaking agents to deal with the deluge.

With sanctions on Russian banks and companies preventing many citizens from accessing foreign capital, Russians are increasingly trying to circumvent bank transfers through digital currencies in Dubai, two cryptocurrency traders in the city have said , where they are able to liquidate large sums of money.

“It is a haven of peace. … The influx of Russian accounts skyrocketed by 300% days after the start of the war in Ukraine,” said a Russian crypto trader in Dubai, who spoke like the other on condition of anonymity for fear of reprisals.

Meanwhile, Abu Dhabi’s state-owned investment firm Mubadala remains among Russia’s most active sovereign wealth funds, along with those of China and Qatar, according to calculations by Javier Capapé of IE University in Spain for l ‘AP.

But the pressure is mounting. Late Tuesday, the US Embassy in Abu Dhabi released a strongly worded video message in Solidarity with Ukraine featuring local ambassadors from the world’s major democracies as the Russian Foreign Minister visits the region.

“We are united against Russia’s unjustifiable, unprovoked and unlawful aggression,” said Ernst Peter Fischer, German Ambassador to the UAE.