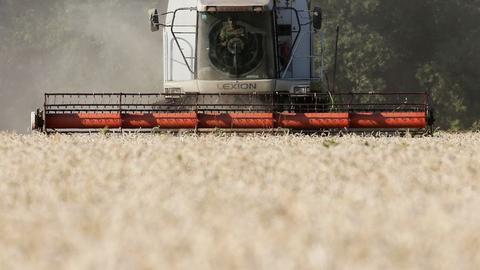 Ukraine is struggling to hold its own in bloody street-to-street fighting in the eastern frontline town of Sievierodonetsk as President Zelenskyy vows to reverse Russia’s gains in the fighting – which in are now on their 105th day.

Ukraine has said Moscow’s aggression was responsible for a global grain crisis, dismissing Russian claims that Western sanctions against Moscow had driven up prices.

“We actively communicated, the president and myself, on the real cause of this crisis: it is Russian aggression, not sanctions,” Ukrainian Foreign Minister Dmytro Kuleba said during a briefing with officials. Ukrainian journalists broadcast on social networks.

Sanctions must be lifted for Russian grain to reach markets – Kremlin

The Kremlin has said Western sanctions against Moscow must be lifted before Russian grain can be delivered to international markets.

“President (Vladimir) Putin has said that in order for Russian grain volumes to be delivered to international markets, direct and indirect sanctions against Russia must be lifted,” Kremlin spokesman Dmitry Peskov said during of a conference call.

He said the sanctions imposed by the West in response to the Russian operation in Ukraine affected maritime insurance, payments and access to European ports.

He added that “no substantive discussion” of their lifting was taking place.

Ukraine has called “empty words” Russian Foreign Minister Sergei Lavrov’s assurances that Moscow will not use the situation to its advantage if kyiv allows grain shipments to leave safely through the Black Sea.

“Military equipment is needed to protect the coastline and a navy mission to patrol export routes in the Black Sea. Russia cannot be allowed to use grain corridors to attack southern Ukraine,” Foreign Ministry spokesman Oleg Nikolenko tweeted.

The Russian-installed administration in the occupied part of Ukraine’s Zaporizhzhia region plans to hold a referendum later this year on joining Russia, Russian news agencies quoted one of its members as reporting.

“The people will determine the future of the Zaporizhzhia region. The referendum is scheduled for this year,” the official, Vladimir Rogov, was quoted by TASS as saying, without giving further details on the timing.

About 60% of the region is under Russian control, part of a swathe of southern Ukraine that Moscow seized at the start of the war, including most of neighboring Kherson province where officials settled by Russia also discussed plans for a referendum.

Microsoft Corp is significantly reducing its operations in Russia, in response to Moscow’s attacks on Ukraine, Bloomberg News reported.

The company, which suspended sales of its products in Russia in March, did not immediately respond to a Reuters request for comment.

Grain silos in government-controlled territory of Ukraine are half full ahead of this year’s harvest, the head of the Ukrainian Grain Association has said.

There were some 30 million tonnes of grain stored in Ukrainian-controlled territory out of a capacity of around 55 million tonnes, Mykola Gorbachov told an International Grains Council (IGC) conference in London, adding that there were 13 to 15 million tons of storage capacity in Russia. -occupied areas.

It’s up to Ukraine to clear ports: Lavrov

Russian Foreign Minister Sergei Lavrov said it was up to Ukraine to solve the problem of resuming grain shipments by clearing its ports, adding that no action was required from the Russian side as it had already made the necessary commitments.

The Russian and Turkish military are discussing the issue of mine clearance in Ukrainian seaports to allow grain exports, Lavrov said. He said he was ready to provide any kind of security for ships – “hand in hand” with his Turkish counterparts.

To solve the problem, it is enough for the Ukrainians to let the ships out of their ports, either by clearing them or by tracing safe corridors, nothing more is needed

Turkey urges all parties to pave way for exports amid conflict

Turkey has urged all parties concerned to jointly pave the way for the export of products from Ukraine and Russia, which are locked in a conflict, Turkish Foreign Minister Mevlut Cavusoglu told a press conference alongside the Russian Sergei Lavrov.

Cavusoglu said a dialogue was needed on steps to be taken for the safe passage of ships from Ukraine, adding that Ankara found the UN plan to establish a mechanism on the food corridor “reasonable. and doable”.

Turkey is involved in efforts to set up a UN-led mechanism that would create a safe corridor for the shipment of Ukrainian grain – and for Russia to export food and fertilizers.

If we are to open the international market to Ukrainian grain, we consider the removal of barriers that hinder Russian exports to be a legitimate requirement.

In a joint press conference with Turkish Foreign Minister Mevlut Cavusoglu, Lavrov also claimed that Russia will achieve the goals of its “special military operation” in Ukraine. He hinted that Russia was ready for a meeting with representatives of the United Nations and Ukraine in Istanbul, according to Anadolu Agency.

Cavusoglu hinted that there may again be grounds for the Russian-Ukrainian negotiations, which have hit a snag.

Governor: Ukrainian forces may have to withdraw to Sievierodonetsk

Ukrainian troops may have to withdraw from the eastern city of Sievierodonetsk, which is being shelled by Russian troops “around the clock”, the regional governor said.

“It is possible that we will have to retreat” to better fortified positions, Luhansk Governor Sergiy Gaiday said in an interview with the 1+1 TV channel. But Ukrainian forces will not abandon the city, he added.

Ukraine expects Russia to intensify its bombardment of Sievierodonetsk and launch a major offensive on which Moscow is focusing all its efforts, he added.

Ukraine is one of the world’s biggest grain exporters and Western countries have accused Russia of creating a risk of global famine by closing Ukraine’s Black Sea ports. Moscow denies any responsibility for the international food crisis, blaming Western sanctions.

Norway has donated 22 self-propelled howitzers to Ukraine, including spare parts, ammunition and other equipment, the Norwegian Defense Ministry said.

“The Norwegian government waited to publicly announce the donation for security reasons. Future donations cannot be announced or commented on,” it said in a statement.

Ukraine is launching a “Book of Executioners”, a system to collect evidence of “war crimes” that kyiv claims were committed during the Russian military offensive, President Volodymyr Zelenskyy has said.

Ukrainian prosecutors say they have registered more than 12,000 alleged war crimes involving more than 600 suspects since the Kremlin launched its offensive on February 24.

“Next week, a special publication is to be launched – ‘The Book of Executioners’ – an information system to collect confirmation of data on war criminals, criminals of the Russian army,” Zelenskyy said in a statement. video speech.

Zelenskyy said it would be a key part of his long-standing promise to bring to justice Russian servicemen who committed what Ukrainian authorities have described as murder, rape and looting. “These are concrete facts about concrete individuals guilty of concrete cruel crimes against Ukrainians,” he said.