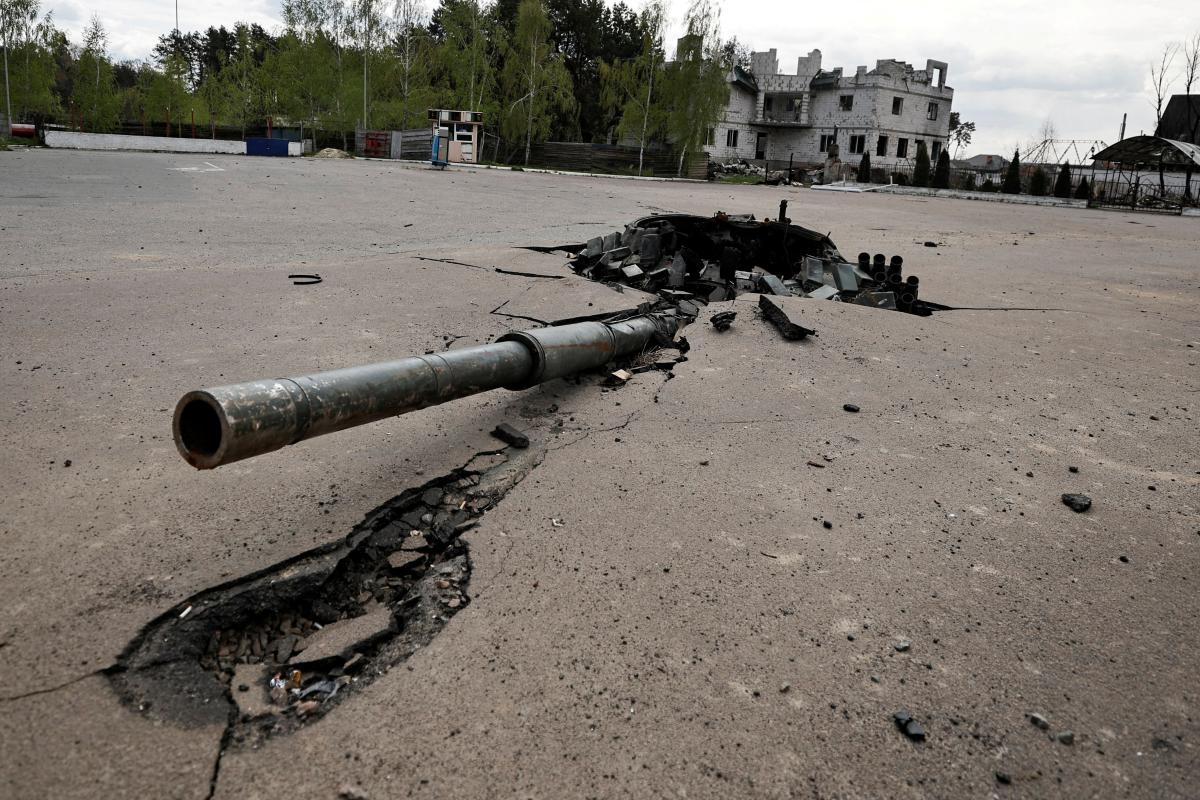 Russian President Vladimir Putin could hardly have used his speech on May 9, Victory Day, the annual holiday marking the Nazis’ surrender to the Soviets, to declare victory in his military campaign against Ukraine. Nor did he take the opportunity to declare a general mobilization, as some analysts had predicted. Instead, speaking from a rostrum in Moscow’s Red Square, Putin looked like a sore loser, complaining that NATO threats had “forced” him to act preemptively in the Donbas.

Three months after launching his ill-conceived invasion of Ukraine, it seems increasingly likely that Putin’s attempt to liberate the Donbass from Kyiv will be remembered as one of history’s most spectacular failures. contemporary military. Russian troops lost the battle for Kyiv in the first month of the conflict and are now struggling to advance in eastern Ukraine. Meanwhile, they continue to suffer devastating losses: as of May 16, according to the Ukrainian Defense Ministry, Ukrainian forces have killed more than 28,000 Russian soldiers. The question now is whether the national humiliation facing Russia is more like the Russo-Japanese War of 1905, which marked the beginning of the end of the Tsarist era, or Josef Stalin’s failed attempt to capture Finland in the Winter War of 1939-1940.

Systemic corruption has hampered Russia’s ability to wage a successful war. Since 2013, for example, Putin has awarded at least $3.2 billion in military supply contracts to his friend Yevgeny Prigozhin, who has provided Russian troops with supplies so meager they have resorted to simply looting grocery stores. to feed onself. Cheap and poorly made Chinese tires have been blamed for slowing the advance of Russian military convoys. According reports by the Ukrainian anti-corruption agency, a contractor provided Russian troops with what was advertised as bulletproof vests, but which turned out to be filled with cardboard instead of armored plates.

The Ukrainian army, on the other hand, exceeded all expectations. Hundreds of thousands of Ukrainians volunteered to defend their homeland. Thanks to the eight-year war in Donbass, tens of thousands of Ukrainian soldiers have combat experience, and many have benefited from American and British training. Ukraine’s Western-made anti-tank weapons and Stinger anti-aircraft systems have proven highly effective, and its Western allies are stepping up deliveries of weapons and military equipment.

After the Russian invasion on February 24, the United States and its allies quickly imposed sanctions to stifle the Russian economy. Western sanctions are no longer aimed at deterring Russia but at weakening the Russian economy and reducing its ability to pursue wars. Critically, Western sanctions are now targeted against major Russian state banks. The G-7 froze the Russian Central Bank’s international currency reserves and removed many Russian banks from SWIFT, the international messaging system for interbank transactions. In response, the Russian government increasingly regulates the economy, further damaging Putin’s war effort. In a single day, Putin wiped out most of the economic gains Russia had made since 1991.

The tide of Putin’s war in Ukraine is increasingly shifting against Russia, and it will almost certainly end in a devastating defeat for Russia. It wouldn’t be the first time that Moscow has embarked on an ambitious military adventure in search of additional territory, only to find itself outmatched and humiliated.

A parallel that comes to mind is the Winter War of 1939-40, a campaign on the fringes of World War II, in which Stalin himself decided to invade Finland and establish his own Finnish government. The Red Army failed to make any progress against the small but brave Finnish army, and it suffered appalling losses. But the parallels end there. When the effort failed, Stalin let professional generals take command, giving Soviet Army Chief of Staff Marshal Boris Shaposhnikov full authority over operations in the Finnish theater. After three months, Stalin settled for a peace treaty with limited gains at a huge price. Putin, on the other hand, did not hand over command to his generals. On the contrary, he has tightened his control of the detail and the Ukrainian leadership is not ready to give up the lands lost after February 23.

The most plausible parallel is the Russo-Japanese War of 1904-5. Its origin was imperial rivalry. Russia was looking for a warm water port on the Pacific Ocean, clashing with Japan’s imperial ambitions. The war got off to a bad start for Russia, but Tsar Nicholas II insisted on fighting on as hopes of victory faded. Despite this, he continued the war to preserve the dignity of Russia by avoiding a “humiliating peace”. But the Russians were humbled by the defeat and rose up against Tsar Nicholas II, securing a more liberal regime.

Today, Russia is facing not only a humiliating defeat, but also an appalling economic collapse, for which Putin bears full responsibility. Russia’s official forecast is for an 8-12% decline in GDP, but it could become twice as large. In August 1998, after six days of a much less severe financial crisis, Russian President Boris Yeltsin dismissed his government. Putin, on the other hand, did not allow anyone in his government to step down, forcing everyone to be with him until the bitter end. Needless to say, fear seems to prevail among the Russian government elite.

The conventional wisdom is that Putin’s Praetorian Guard, the Presidential Protective Service, is so strong, well paid and loyal to Putin that it will protect him against any coup attempt. However, the cost of Putin’s continued leadership to Russian society is so high that it would be surprising if no group mobilized against him. Numerous sudden leaks from the otherwise covert intelligence community suggest a high degree of inter-agency rivalry. Even if Russia continues to censor news of the war and the magnitude of its loss in Ukraine, the truth will eventually become apparent. In a decade of war in Afghanistan, 15,000 Soviet soldiers were killed, a failure that contributed to the collapse of the communist regime, but more Russian soldiers than that were killed in the first two months of fighting in Ukraine.

Russia’s internal environment seems explosive on all levels. Plausible rumors spread about the arrests and dismissal of senior security officials; at least seven prominent Russian businessmen reportedly committed suicide after first killing their families, making them look like executions. Social unrest has not been widespread in recent years, but it is happening, and the predicted level of decline in production and living standards has not been recorded since the early 1990s. A natural popular reaction would be widespread social unrest, which would aggravate tensions between the security services.

Eventually, the Russian Security Council could oust Putin. This body meets once a week, but in the past two years it has met in person only once, on February 21, when Putin demanded approval for his war against Ukraine. They met in one of the great halls of the Kremlin several meters from Putin. Initially, Putin’s reluctance to meet his colleagues was attributed to his extreme fear of the coronavirus, but now he seems mostly frightened of his aides, as indicated by his predilection for sitting at the end of a long table.

The Security Council replaced the Politburo as the supreme decision-making body, but it enjoys no popular authority. If the Security Council were to take over, Russia could once again witness a collapse of political power, as in the August 1991 coup attempt, and power could end up in the streets. A few years of unpredictable turmoil could ensue. The alternative would be if Putin succeeded in mobilizing his secret police and turning Russia into a new North Korea, which would be much worse. It is difficult to discern a middle way in this dramatic situation.

Whatever the outcome, the West must begin to plan for the collapse as well as the strengthening of Putin’s regime. If Putin strengthens his power, Western politics must act accordingly. Its sanctions against Russia must be maintained until all Russian troops have left Ukraine. While the West should offer Ukraine substantial material support for its reconstruction, sanctions against Russia should be maintained until Russia agrees to repair the appalling damage it has caused to Ukraine. Future flows of Russian emigrants will probably exceed the millions currently leaving Ukraine.

If Putin loses power, however, Russia’s future looks much brighter. A period of disarray is to be expected, but if Russia ends up achieving a decent democratic regime, the West should rise up and offer a real Marshall Plan, as it did not in 1991. Hopefully an earlier western reconstruction of Ukraine can serve as a blueprint.