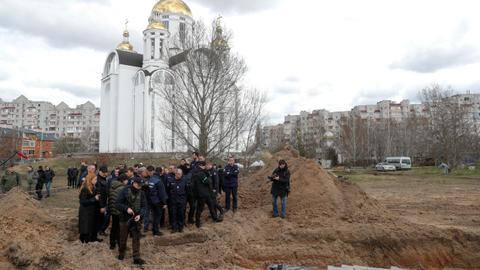 Russia vows its offensive in Ukraine will continue until its objectives are achieved in the face of strong Ukrainian opposition and heavy casualties in the ongoing fighting – now in its 49th day.

Ukraine: more than 720 dead in Bucha and other suburbs of kyiv

More than 720 people have been killed in Bucha and other kyiv suburbs occupied by Russian troops and more than 200 are missing, the Interior Ministry said.

In Bucha alone, Mayor Anatoliy Fedoruk said 403 bodies had been recovered and the toll could rise as minesweepers comb the area.

Authorities said the bodies of six civilians were found with gunshot wounds in a basement in the village of Shevchenkove and that Russian forces are believed to be responsible.

The United States and its allies are moving forward with sanctions aimed at forcing Vladimir Putin to spend Russia’s money to support its economy rather than support its “war machine” for the fight in Ukraine, says a senior Treasury Department official.

Deputy Treasury Secretary Wally Adeyemo, one of the main U.S. coordinators of the Russian sanctions strategy, said in an interview with The Associated Press that the goal was to make Russia “less capable of projecting power at the ‘coming”.

On the same day that inflation registered its biggest increase in decades, Adeyemo said reducing supply chain backlogs and managing the pandemic are key to bringing down the prices he has linked to the ongoing ground offensive in Ukraine, which has contributed to rising energy costs.

Zelenskyy offers to exchange a pro-Russian politician for prisoners

In a morning address, he said it was “important that our security forces and our military forces consider such a possibility”.

Ukraine’s security services announced on Tuesday that they had arrested Medvedchuk, President Vladimir Putin’s closest and most influential ally in Ukraine.

President Joe Biden has said Russia’s offensive in Ukraine amounts to “genocide”, accusing President Vladimir Putin of trying to “erase the very idea of ​​being Ukrainian”.

“Yeah, I called it genocide,” he told reporters in Iowa shortly before boarding Air Force One to return to Washington. “It has become increasingly clear that Putin is simply trying to eliminate the very idea of ​​being Ukrainian.”

At an earlier event in Menlo, Iowa, addressing soaring energy prices resulting from the offensive, Biden hinted that he believed Putin was waging “genocide” against Ukraine, but gave no details.

Streamers and marauders: it is dangerous to return to the Kyiv region