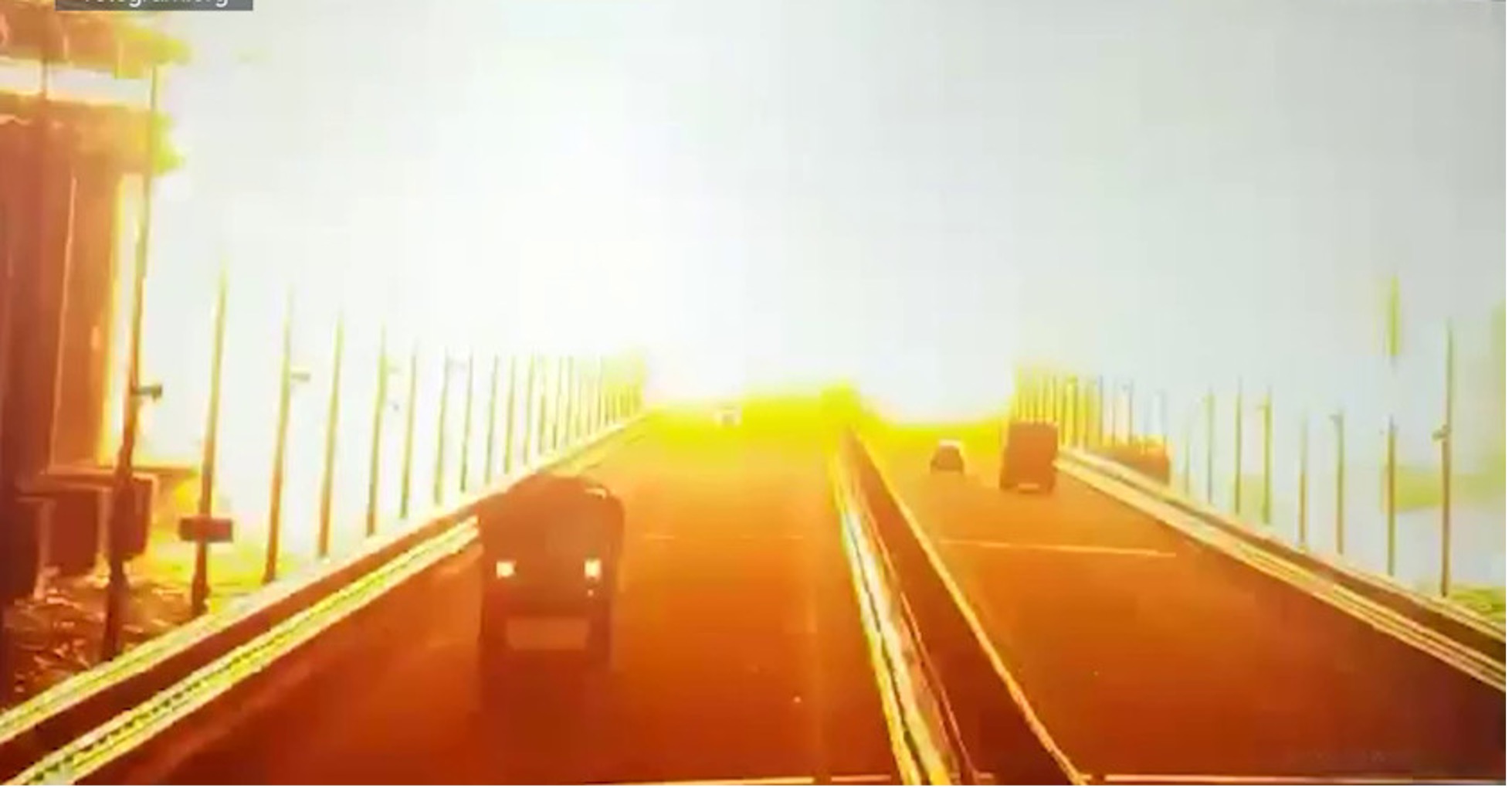 Major escalation against Russia in Crimea/kyiv, EU and NATO push the world to the limit – Workers World

This declaration, by three leaders of the PRCF (Pole for Communist Rebirth, France), was published on 9 October.

Attack on the bridge connecting mainland Russia to Crimea: An explosive charge placed in a vehicle or under the deck explodes as a fuel train passes, destroying three 64-meter-long spans on the northbound traffic lanes. The railway bridge, which also houses pipelines, was not seriously affected, despite the fire which burned several tank cars.

Whatever its modus operandi, the Crimean Bridge terrorist attack is a major provocation against Russia. Given the real power of the Ukrainian military, this irresponsible operation indicates that the worst hawks of NATO and the United States are at the command post in kyiv with one objective: to provoke a major East-West confrontation, whatever whatever the cost to the people of Ukraine. , for that of Russia, even for the whole of Europe.

The goal now proclaimed by the neoconservatives in Washington is to crush Russia, then to dismember Russia in order to dismantle Russian-Chinese cooperation, then to attack the People’s Republic of China, a country that Washington designated has long been its strategic enemy (already under Obama).

Moscow is knowingly forced by the West and its kyiv contractors to face a tragic dilemma: either escalate, possibly including the use of tactical nuclear weapons – which would pose a major risk to world peace. , including the extermination of humanity – or accept humiliation without reacting, which would encourage further aggression by the Euro-Atlantic alliance and the pro-Nazi regime in kyiv against Russia. This last option is no less dangerous for world peace.

More than ever, the real peace activists are those who explain, with facts, that the European Union-NATO has done everything since 2014 to torpedo the Minsk agreements, supposedly guaranteed by kyiv, Paris and Berlin, and continue NATO’s relentless rush east. They contrast with those pseudo-pacifists who run in the peloton of the holy alliance between the media and the politicians, promoted by the pseudo-left and supported without the slightest restraint by the so-called “public service” media.

This rush began in 1991, with the unilateral dissolution of the Warsaw Pact, a dissolution initiated by the deceitful Mikhail Gorbachev, this false friend of peace, this true supporter of a new capitulation of Munich.

However, beyond the differences that may exist on the responsibilities present in this “high intensity conflict, announced by Biden, Macron and the chief of staff of the French army, a conflict that they were already preparing well before February 24, 2022, personalities who occupy positions that are politically quite distant from the geopolitical analyzes that we defend, such as the Gaullist Henri Guaino or the European social democrat Ségolène Royal, [which] demand that France, pathetically aligned today with Washington to the detriment of our vital national interests, urgently finds its independent voice to call for peace and negotiations.

Those on the “left”, such as the leadership of the supposedly “radical” left and the electoral coalition NUPES (coalition in the process of disintegration), preferred to wave the Ukrainian flag instead of “communist”, “green” or “town halls “socialists”.

Those on the “left” who preferred to postpone any effective anti-NATO action, while aggressively demanding that more and more arms be delivered to kyiv (i.e. to its neo-Nazi accomplices like those of the “Svoboda”, a former Ukrainian Nazi party) – all those on the left who have renounced their responsibilities will have to bear the indelible stain of history, like that carried by the French, Russian, Belgian and German “socialists” who, in 1914, betrayed proletarian internationalism and the real interests of their own people, calling, under the guise of false patriotism, for the massacres that became World War I.

More than ever, all those who understand that a continental or transcontinental war would necessarily be nuclear and would lead to the extermination of humanity in our time, all these people must do everything to demand negotiations, de-escalation and an end to deliveries weapons and sanctions that are currently ruining the economies of European countries, while sowing economic and social chaos this fall throughout Europe for the sole benefit of US imperialism and hegemony.

But above all, the time has come for the uninhibited intervention of genuine communist militants and class trade unionists with the workers, and as much as possible with the struggles involving the workers in the companies (as in the refineries, “Camaïeu”, the suppliers of electricity, etc.). In this struggle, we do not forget the mass of employees who are prevented from living normally by the speculative price of gasoline and the de facto blocking of wages by Macron and their bosses.

There is a strong, even vital, link between the defense of world peace, the return of France to an independent foreign and military policy, the defense of wages, the living conditions of workers and social achievements – in particular the stability of guaranteed pensions.

The EU wants to cut off those benefits, even as self-proclaimed Empress Ursula von der Leyen relentlessly calls for escalating sanctions on Russia, more arms delivered to Ukraine and insane spending on ever more money. weapons as Washington demands, with, as a bonus, the rise of German militarization with its historic interventionism on the Russian steppes.

From now on, let’s bring sincere republican, anti-imperialist and anti-war slogans to the people’s movement: money for wages and pensions, not for warmongers or shareholders! Stop ruinous “sanctions” and stop sending murderous and suicidal weapons! Stop the EU-NATO diktats which are leading France, Europe and the world towards chaos and a pan-European conflagration which could become global!

At a time when British transport workers (rail, road, docks) are heading for a general strike and valiantly confronting the Thatcher-2 that is Cruella Truss, at a time when the peace movement is gaining strength in Berlin and With Prague directly accusing the EU and NATO, the development of the anti-capitalist and anti-imperialist struggle is the main hope for the defense, not only of the purchasing power and living conditions of the working classes, but also for world peace and for the future of humanity and all living beings. beings on earth.

This is all the more relevant as the crisis of capitalist domination worsens in Europe, where the Russian-Ukrainian conflict stirred up by Washington weakens the European “Union” and ends up destabilizing the euro. As the French state apparatus fractures (see the massive demonstration right now by judicial police officers against the Macron regime, or see how judges have just sent the minister [Éric] Dupont-Moretti in the courts of the Republic for conflict of interest), Macron even threatens to dissolve Parliament unless his reactionary plan to postpone retirement is quickly approved. . .

In 1914, Lenin already declared in substance that, in the face of the great imperialist world massacre to come, we must be ready to replace the imperialist world war by the revolutionary offensive of Labor against Capital. In very different conditions and forms, this salutary slogan, centrally associating the class struggle with the defense of peace and humanity, is, in principle, more topical than ever.