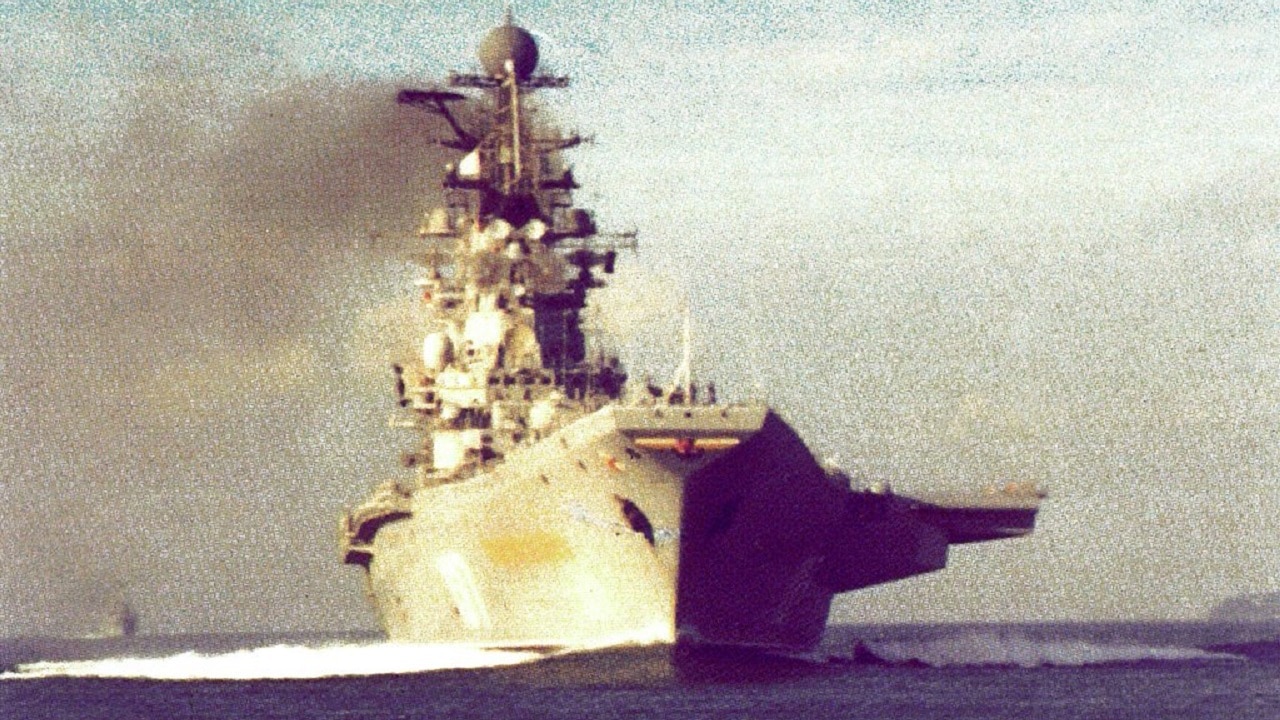 Learn about the kyiv-class aircraft carrier: Russia’s plan to kill US nuclear submarines

Not large enough to be an aircraft carrier and heavier than a cruiser, Russia’s kyiv-class aircraft carrier was a hybrid ship intended to respond to the growth of nuclear missiles launched by US Navy submarines during the cold War. This was the Soviet Navy’s second attempt to build some kind of aircraft carrier to challenge the progress of American submarine and flat-top development. The four kyiv-class ships never made it. They did not have enough air power or offensive capability and this showed that the Soviets lacked the talent or shipbuilding capability to succeed in the carrier war.

Started in the 1970s, the Soviets called the kyiv class Project 1143 Krechyet which was designed to be the response to sea-launched nuclear weapons. The kyiv class built on the old Moskva class which had only 12 helicopters for anti-submarine warfare. Fighting submarines was the Moskva and Leningrad’s primary mission to prevent the Americans from firing submarine-launched missiles like the Polaris.

Under-launched nukes have been upgraded

But then the ranges of nuclear weapons grew longer and the US Navy was able to fire nuclear weapons at great distances. The Moskva class lacked the means to challenge these long-range launches and they were soon considered obsolete. The kyiv class should be the answer if the Soviets were ever to have any form of aircraft carrier.

kyiv class: only a handful of fighters

The idea behind the kyiv class was to load it with 20 Yak-38 vertical take-off and landing (VTOL) fighters. But it was easier for the Soviets to outfit the carrier with anti-submarine helicopters like the Ka-25 subfighter than a full contingent of Yak-38 fighters. The Yak-38s were really not that powerful and were considered light attack fighters – not really enough to answer the call of kyiv’s main mission which was to eliminate carriers, cruisers and destroyers Americans.

The Sandbox anti-ship missile was not bad

The kyiv class carried 16 Sandbox missiles and Goblet surface-to-air missiles with 72 missiles, as well as rocket launchers and anti-submarine torpedoes, so the kyiv class was more heavily armed than the Moskva class. The Sandbox was one of the best anti-ship missiles of the time and could skim the seas at MACH 2.5 with a range of 341 miles.

The first of the class, the 44,000 ton kyiv, went into action in 1976. Three other kyiv-class ships were built: Minsk, Novorossiysk and Baku (later renamed Admiral Gorshkov). The arms were extended forward, making the ships look like cruisers, but the stern and port side contained the flight deck next to the superstructure island which was aft of the center of the ship .

The kyiv class has never imposed itself. The hybrid model couldn’t challenge the top US carriers. They didn’t have the airpower to make a difference in the air battle. Anti-ship missiles were good for those times. With these, the kyiv class could have hit ships in a US Navy carrier battle group, so that was the advantage. The Soviets should have done everything possible to produce a genuine aircraft carrier instead of these hybrid designs. There were plans to do just that, but beyond cursed Admiral Kuznetsov, the Soviet and Russian carrier program was struggling for relevance in a military that was more concerned with land and air warfare.

After the Cold War, the Kyiv-class hybrid carriers were retired due to lack of funds and lack of interest from the Russian government. The Baku/Admiral Gorshkov was sold to India in 2004. The Russians scrapped the Novorossiysk. Minsk and kyiv have been bought up by Chinese business interests.

Biography of the expert: As editor of defense and national security in 1945, Dr. Brent M. Eastwood is the author of Humans, Machines and Data: Future Trends in Warfare. He is an emerging threat expert and former US Army infantry officer. You can follow him on Twitter @BMEastwood. He holds a doctorate. in Political Science and Foreign Policy/International Relations.

Diia – Ukraine is setting up a leading digital government in the midst of a war. What’s our excuse?