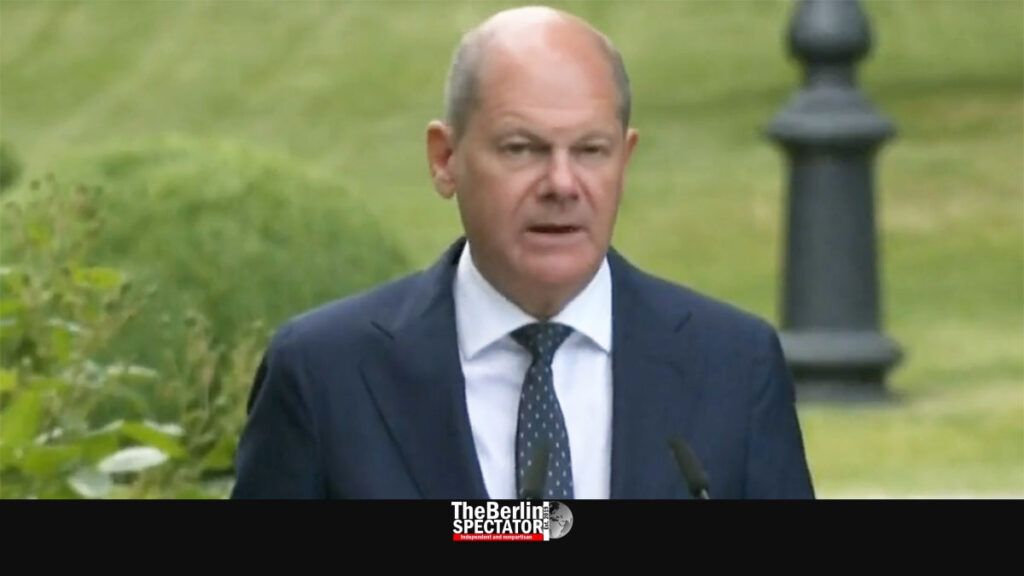 Olaf Scholz traveled to Ukraine on Thursday, with his colleagues from France, Italy and Romania. In kyiv, the Chancellor said that the European Union must prepare. Germany wanted Ukraine to become a candidate for membership.

Berlin, June 16, 2022 (The Berlin Spectator) — On Wednesday evening, Chancellor Scholz, French President Emmanuel Macron and the Italian Prime Minister boarded a train at the Polish-Ukrainian border. His route and schedule have not been announced, for security reasons. Thursday morning they arrived in kyiv (Kiyv). Klaus Iohannis, the president of Romania, joined them there.

The Berlin Spectator now has a newsletter. You can register here :

This morning, Scholz traveled to Irpin, a suburb of the Ukrainian capital. He surveyed the damage there and said the Russian military had used a lot of brutality. In the afternoon, the four visitors held a press conference with their Ukrainian colleague Volodymyr Zelenskyy.

President Macron said that Ukraine could count on the European Union. Russia’s attack would never be accepted. Support for Ukraine would increase. It was about the security of all of Europe. “Europe is by your side and will be until there is a victory,” Macron told Zelenskyy. Prime Minister Draghi said Ukraine must be able to defend itself. A lasting and just peace was needed.

Olaf Scholz was the last head of government to speak at the press conference. Russia’s attack on Ukraine marked a turning point in the ages, the Chancellor said. Russia was trying to move the borders, which was completely unacceptable. “We support Ukraine financially and on a humanitarian basis.” More than 800,000 Ukrainian refugees were in Germany, 135 children from there were educated in German schools, he said.

At the moment, the Federal Republic was training Ukrainian soldiers on modern weapons systems, Scholz pointed out. An air defense system had also been promised to the country. In addition, the Chancellor mentioned an international agreement that had been concluded to provide Ukraine with rocket launchers.

Despite all its support for Ukraine, Olaf Scholz’s government has been harshly criticized for not doing enough, both in Germany and in Ukraine. A few weeks ago, demands were made that Scholz should go to Ukraine “immediately”. The Chancellor has waited, until now. First, a dispute over Germany’s former Russian policy between Kyiv and Berlin had to be resolved.