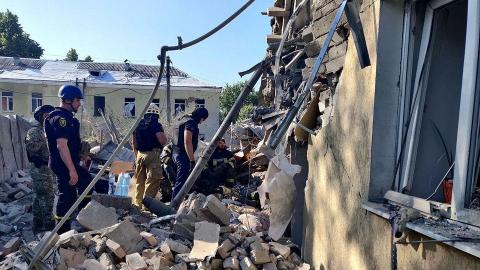 Ukraine said forces from Moscow struck a military base north of the capital kyiv and attacked the central Ukrainian region of Kyrovograd, killing at least five people.

Five people were killed and 25 injured in a Russian missile strike on a flight school in the town of Kropyvnytskyi in central Ukraine.

“There are casualties, dead and injured. Twenty-five have already been taken to medical facilities – they have been injured. Five have been killed, including a soldier,” he said.

“There are material losses – two civilian aircraft and one AN-26 aircraft.”

Earlier in the day, Ukraine said Moscow forces struck a military base north of the capital kyiv, in a rare admission of a Russian attack on Ukrainian military infrastructure.

One building was destroyed and two were damaged, he said, in the attack on the town about 30 kilometers (19 miles) north of the capital.

The missiles – one of which was shot down by Ukrainian air defenses – were fired from the Crimean peninsula, which Russia annexed from Ukraine in 2014, he added.

Casualties among the troops

Gromov also reported attacks on the Chernigiv region in northern Ukraine, with shells fired from neighboring Belarus, an ally of Moscow.

He added that there had been “losses” among Ukrainian troops.

To the east, Russian forces were trying to advance toward Siversk and Bakhmut — towns in the industrial Donbass region that Moscow is trying to capture, Gromov said.

The situation there was “difficult but perfectly under control”, he said.

In the Russian-controlled Kherson region, where Ukrainian forces are waging a counteroffensive, three villages have been retaken in the past two weeks, Gromov added.

“It’s a troubled morning. Again there is missile terror. We will not give up,” Ukrainian President Volodymyr Zelensky said on social media.

At least one person was killed and two injured in a strike in the central Dnipro region, Governor Valentin Reznichenko said on social media.

In the southern region of Mykolaiv, one person was injured and a school building was destroyed following “extensive” shelling, regional governor Vitaliy Kim said.