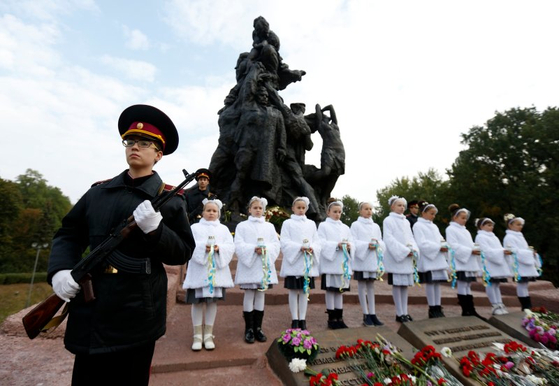 A fight for freedom

KANG KI HEON
The author is an Industry 1 reporter from JoongAng Ilbo.

Dmitry Shostakovich’s Symphony No. 13 is also called “Babi Yar”. It is the name of a city near the Ukrainian capital Kiev. One day in September 1941, in the midst of war with Germany, the Nazi SS massacred more than 30,000 Jews, Gypsies and Ukrainians with machine guns in Babi Yar.

Shostakovich wrote the music after a poem by Yevgeny Yevtushenko (1933-2017). Symphony No. 13 based on Evtushenko’s poem criticizing anti-Semitism in Russia premiered at the Moscow Conservatory on December 18, 1962. The Soviet regime did not welcome Shostakovich’s work. Police were waiting outside the concert hall and the program was not distributed.

The life of Shostakovich is the modern history of Russia itself. He bowed to the regime, criticized it and strongly claimed artistic freedom. In “The Sound of Time,” British writer Julian Barnes asked what he could face the sound of time with and wrote that Shostakovich has pursued music that turns into a whisper of history over the decades.

Once again, Bibi Yar risks being drawn into a war. One hundred thousand Russian soldiers have moved towards the Ukrainian border, and foreign media are reporting a possible invasion early next year. Like the forced occupation of the Crimean peninsula in 2014 by Russia, effective control is planned. The Russian government has already closed the Yamal-Europe gas pipeline to Germany via Poland. The gas supply was suspended for more than four days. Europe’s gas supply via Ukraine has also been cut by almost 20%.

With the Russian risk, the possibility of a gas crisis in winter increases, and the energy supply of each country is also a concern. As gas supply is cut, gas prices in Europe are skyrocketing. While Korea only imports 5% of Russia’s natural gas, the country could be affected if the global energy crisis continues.

But what is more worrying than the looming energy crisis is Russia’s likely invasion of Ukraine. The resistance against discrimination and freedom that Shostakovich put in Babi Yar is still buried in the noise of time. It’s up to us to bring it to light.