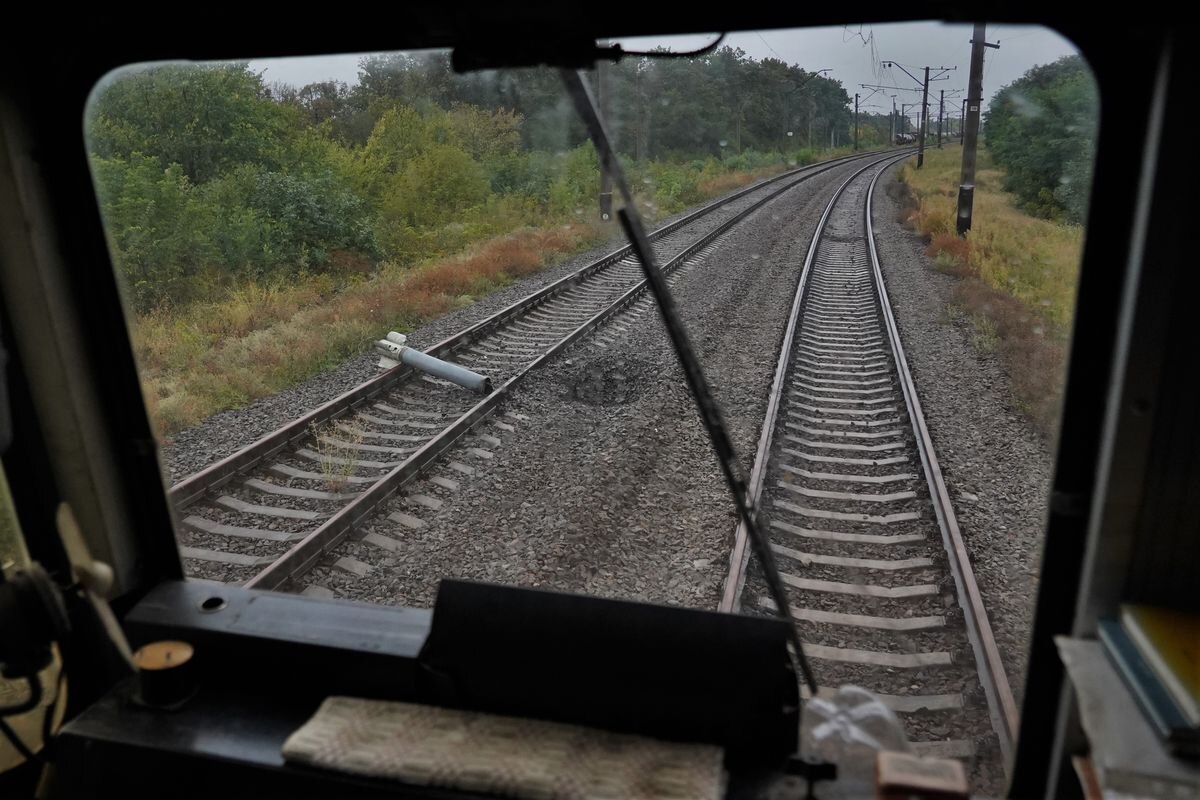 Smoke fills the 71 km long railway line that leads from Kharkiv to Balakliia, one of the cities that the Ukrainian army has just liberated from Russian occupation.

Remnants of all kinds of ammunition appear on the rocks and tracks, from missile casings to mortar shells. There are craters of different sizes, marking recent explosions. Every few kilometers the tracks are torn or the suspension cables have fallen off. The bridge that crosses the river was also battered by attacks.

For more than six months, since the Russian invasion of February 24, this road has not seen a single train pass. The neglected railway infrastructure was caught between scenes of intense combat, deprived of any kind of maintenance. Along the tracks you can see damaged trees and destroyed farms.

After regaining ground amid the Russian invasion, authorities in Kyiv – Ukraine’s capital – want to restore normalcy as soon as possible.

“We will solve this problem in a few hours,” says Oleksander Kamyshin, the general director of Ukrainian railways. The state-owned company is the country’s largest employer, with more than 230,000 employees. It has been the constant target of attacks by Russian forces, aware that rail transport is essential for moving people and goods.

Accustomed to moving decisively throughout this conflict, Kamyshin wanted to be the first to inspect the damage first hand. He is part of an expedition which, since Monday, has been closely analyzing what needs to be repaired, so that rail service and communication lines can be restored as soon as possible. “Immediately”, underlines the boss of the railway. But, he said, the first thing is security and to achieve this, demining work must be completed.

A train locomotive with a platform for repairing cables carries a dozen people, including the driver, two of Kamyshin’s bodyguards and this reporter. The trip is not without surprises. At one of the crossings, despite the operator of the control panel honking non-stop, an armored car loaded with troops crosses a few meters away, almost rammed by the train.

“Were [trying] to restore the mobility of citizens as quickly as possible, the distribution of humanitarian aid, freight to revive the economy… in short, we are trying to regain our rhythm of life,” explains Kamyshin. He is aware of the great counter-offensive that has been launched in eastern Ukraine. The area has been essential for the Russian invaders to receive supplies from their country, just 30 miles away – they are desperate not to lose control. The boss of the national railways recognizes that beyond Balakliia, the towns of Kupiansk and Izium are still home to pockets of resistance… it is not on the agenda to restore rail service in these areas for the moment.

Kamyshin is accompanied, among others, by two of his trusted men, the infrastructure and passenger managers. They take their time to move along a path where the train is moving very slowly. The rainy landscape is made up of empty fields and the occasional country house. They watch, motionless, the stations that have stood at the foot of the tracks for more than a century.

On the outskirts of Balakliia the expedition reached a point where it could not continue by rail until the necessary repairs had been made. Kamyshin descends, falls to the ground and begins to advance with his group. Before heading to this area, security officials warned that due to the danger of unexploded mines, no one should stray more than a meter from the tracks. The 38-year-old director jokes with the employees – who are equipped with bulletproof vests and helmets – and trots along as if expecting an imminent explosion. Andrii Stepanect – one of the experts – stays behind and waits for the group to move away before supervising the controlled explosion of a mine.

Kamyshin observes every detail. “Look at the rusty rails,” he sighs. “They’re like that because they haven’t been used for six months.” Later, he puts some bullets in his pocket as souvenirs. The General Director of Ukrainian Railways must be warned that it is dangerous for him to climb on the moving platform.

During the trip, he holds impromptu meetings and talks about the future of the conflict or how to speed up the opening of new railroads. It is strange to accompany him in the field only a few days after having received in kyiv the American Secretary of State Antony Blinken. Blinken made the visit through the “iron diplomacy” program, which allows authorities around the world to travel by train to Ukraine, a country that has closed its airspace to civilian flights.

As night falls on the return to Kharkiv, the train becomes the scene of an improvised picnic, with bread, sausage and tomato. Someone manages to fall asleep in the middle of the hectic journey – Kamyshin pulls out his cellphone and captures the moment with a mischievous grin.