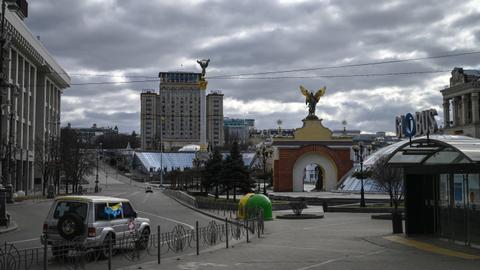 Russia continues to bomb Ukrainian sites on the 14th day of the war as Western nations step up pressure on Moscow and tens of thousands of people leave villages and towns to escape death and food shortages.

An air alert was declared in and around Kyiv, with residents urged to get to bomb shelters as quickly as possible.

Russian forces have seen their advances halted in some areas, notably around the capital Kyiv, by fiercer-than-expected Ukrainian resistance

Lavrov travels to Turkey for talks with Kuleba

A humanitarian corridor out of the beleaguered Ukrainian city of Sumy will continue to operate, regional governor Dmytro Zhyvytskyy said.

About 5,000 people bussed out of the northeastern city on Tuesday after Moscow and Kyiv agreed on the corridor, he said, and about 1,000 cars were also able to leave, heading to the city of Poltava.

The Chernobyl nuclear power plant is no longer transmitting data to the UN’s atomic watchdog, the agency said, expressing concern about personnel working under Russian guard at the Ukrainian facility.

The head of the International Atomic Energy Agency, Rafael Grossi, “reported that the remote transmission of data from safeguards monitoring systems installed at the Chernobyl nuclear power plant had been lost,” the agency said in a statement. a statement.

“The Agency is reviewing the status of safeguards monitoring systems in other locations in Ukraine and will provide further information soon,” she said.

The Pentagon rejected Poland’s surprise announcement that it would give the United States its MiG-29 fighter jets for use in Ukraine.

Pentagon spokesman John Kirby said Poland’s statement that it intended to deliver the 28 jets to the US Ramstein Air Base in Germany raised the worrying prospect that warplanes depart from a US and NATO base to fly in contested airspace with Russia in the Ukraine conflict.

“We will continue to consult with Poland and our other NATO allies on this issue and the difficult logistical challenges it presents, but we do not believe Poland’s proposal is tenable,” Kirby said in a statement.

Hungary will not support sanctions against Russia over oil and gas imports: PM

Hungarian Prime Minister Viktor Orban has announced that his country is against possible sanctions against Russia which would cover imports of its oil and natural gas.

Orban said Hungary condemned Russia’s launch of a war against Ukraine but would not allow Hungarian families “to be forced to pay the price of war”. Noting that the sanctions imposed on Russia affect all countries in Europe, he said the extension of sanctions to the Russian energy sector will affect Hungary “very seriously”.

Orban said Hungary buys most of its oil and natural gas from Russia and 90% of Hungarian families heat their homes with gas, adding that the Hungarian economy could not function without oil and gas.

Russia’s central bank said it is limiting the amount of money citizens with foreign currency accounts can withdraw under a “temporary procedure”.

The procedure runs from March 9 to September 9, the bank said in a statement posted on its website.

Account holders can withdraw up to $10,000 in cash, and the rest of the funds must be in rubles at the market rate on the day of issue.

Russia has authorized some evacuations, but repeated attacks have been reported along these same routes pic.twitter.com/I4wE9sxNzx

Meanwhile, the United Nations human rights office said it has verified 1,335 civilian casualties in Ukraine so far, including 474 killed and 861 injured, but the true toll is likely to be higher.

Ukraine says its forces have killed more than 11,000 Russian soldiers.

Russia has confirmed around 500 casualties.

Neither side disclosed any Ukrainian casualties.

Civilian evacuations took place on Tuesday, in particular from the city of Sumy, from where two convoys left during the day.

But attempts to evacuate the port city of Mariupol have repeatedly failed in recent days, with Kyiv and Moscow blaming the other side for the failures.

Meanwhile, the Ukrainian president has called for an end to the war with Russia, saying the two countries should hold talks for the good of the people.

“The war must end. We must sit down at the negotiating table – not for outdated murderous ambitions, but for the interests of the people,” Volodymyr Zelenskyy said in a video message.

Putin’s version of events | Letters to the Editor

Reviews | Kiev against Kiev, Zelensky against Zelenskyy, and the immense meaning of “the”