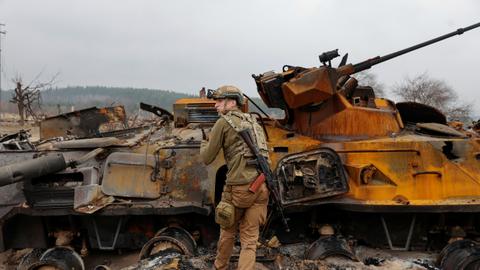 Russia is threatening to shut off its gas taps to Europe, opening a new front in its assault on Ukraine amid growing skepticism over Moscow’s claim it is scaling back its assault – now in its 37th daytime.

Ukrainian President Volodymyr Zelenskyy has announced that he has stripped two generals of their military rank.

Zelenskyy said that “something prevented them from determining where their homeland was” and that they had “violated their military oath of allegiance to the Ukrainian people”.

According to Zelenskyy, one of the generals had headed the internal security of the SBU, the main intelligence agency.

He said the other general had been the head of the SBU in the Kherson region, the first major city to fall to the Russians. Zelenskyy said nothing about the fate of the two generals other than that they were stripped of their rank.

The Ukrainian government said Russian forces blocked 45 buses that had been sent to evacuate civilians from the besieged port city of Mariupol, and only 631 people were able to get out of the city by private car.

According to Ukrainian officials, tens of thousands of people have left Mariupol in recent weeks along humanitarian corridors, reducing the population before the attack from 430,000 to around 100,000 last week.

Vereshchuk said around 45,000 residents of Mariupol have been forcibly deported to Russia and areas of eastern Ukraine controlled by Russian-backed separatists.

Zelenskyy: withdrawal was a Russian tactic

Ukrainian President Volodymyr Zelenskyy said after the withdrawal of Russian troops from the north and center of the country and the situation has heated up in the southeast where Russian forces are preparing for new powerful attacks.

In his video address to the nation, Zelenskyy said it was heartening for all Ukrainians to see Russian troops withdrawing from northern Kyiv, around the northern city of Chernihiv and from Sumy to the northeast.

But he urged the Ukrainians not to let go, saying the withdrawal was just a Russian tactic. Zelenskyy said he spoke with European Council President Charles Michel and Turkish President Recep Tayyip Erdogan, while his adviser spoke with US national security adviser Jake Sullivan.

The top Ukrainian Catholic cleric in the United States has warned that religious minorities in the Eastern European country risk being ‘crushed’ if Moscow takes control, as fighting has raged over a month after the start of the Russian offensive.

Archbishop Borys Gudziak said groups at risk include Catholics, Muslims and Orthodox who have broken with the Patriarch of Moscow.

Gudziak also cited reports of Russian forces damaging two Holocaust memorials and Moscow’s misrepresentation of Ukraine as a ‘Nazi’ state, despite Ukraine overwhelmingly electing a Jewish president in the person of Volodymyr Zelenskyy.

“What is at stake for believers is their freedom to practice their faith,” Gudziak said during an online roundtable on the offensive, organized by the Initiative on Catholic Social Thought and Life. public of Georgetown University.