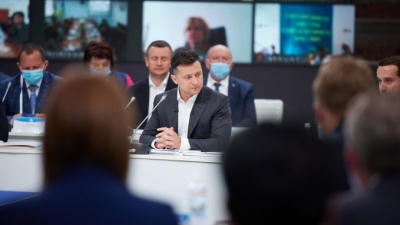 Kiev, June 4 Ukrainian President Volodymyr Zelensky discussed the security situation in the conflict-affected Donbass region with a delegation of visiting US senators.

“This meeting is very important to us because it reaffirms that the United States is our strategic partner. Especially now, at a very tense time,” Zelensky said.

Senators said the United States is closely monitoring the security situation in Donbass, which includes the Donetsk and Luhansk regions, and supports Ukraine in a peaceful resolution of the conflict.

On May 6, US Secretary of State Antony Blinken visited Kiev, where he met Zelensky and declared that Washington supports the sovereignty, territorial integrity and independence of Ukraine and stands stood ready to continue helping.

He also welcomed the progress made by Ukraine on the path of reforms, calling for continued efforts to deepen the land market, the judiciary and anti-corruption reforms.

Parts of the Donetsk and Luhansk regions along the Russian border have been controlled by Moscow-backed rebels for nearly seven years.

According to UN estimates, more than 13,000 people have been killed in the fighting since 2014, while up to 40,000 others have been injured.

Despite the imposition of the last ceasefire in 2015, around 50 people have been killed since the start of this year alone.

Russia, however, denied the charges, saying the charges were baseless.

Disclaimer: This article was posted automatically from an agency feed without any text changes and has not been reviewed by an editor