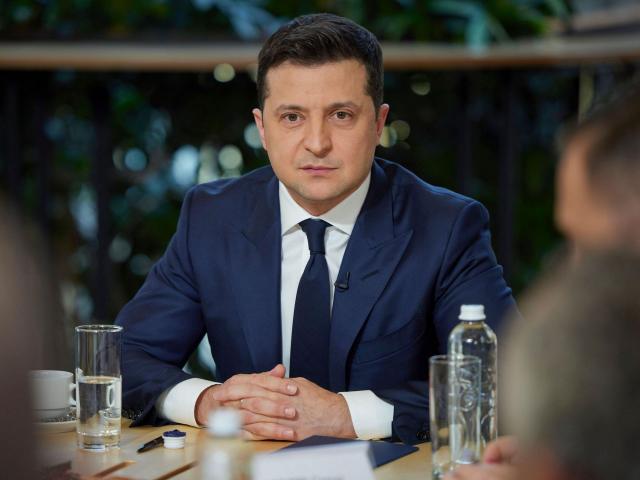 Ukrainian President Volodymyr Zelensky says group of Russians and Ukrainians are plotting coup against him :: WRAL.com

CNN – Ukrainian President Volodymyr Zelensky has said that a group of Ukrainians and Russians are planning to carry out a coup against him next week.

Speaking at a press conference in Kiev on Friday, the president said he had received intelligence information, including audio, that the coup is scheduled for December 1 or December 2.

Zelensky said there was a sound of Ukrainian and Russian plotters discussing the plan. The Ukrainian president said the suspected plotters also mentioned the name of one of Ukraine’s richest men, Rinat Akhmetov.

Zelensky alleged that Akhmetov – the owner of the Ukrainian financial and industrial holding company, System Capital Management (SCM) – was “drawn into the war against the Ukrainian state” by people around him, but he didn’t did not explain what he meant or provide evidence to support his claims.

Zelensky said he invited Akhmetov into his office to talk about the alleged plot.

The Ukrainian president noted that unlike his predecessors Viktor Yanukovych and Petro Poroshenko, he “will not show up anywhere”, but will invite all those involved to solve this problem in his office.

Zelensky stressed that this was an attempt to destabilize the country. â€œI don’t think society wants this. The country doesn’t want this. The people who want this are the ones who have lost power,â€ Zelesnky said.

In a statement to CNN shared by his company System Capital Management, Akhmetov said he was “outraged by the spread of this lie”.

â€œThe information made public by Volodymyr Zelensky about attempts to drag me into some kind of coup d’etat is an absolute lie. I am outraged by the spread of this lie, regardless of the president’s motives.

â€œAs a citizen of Ukraine, the country’s largest investor, taxpayer and employer, I will continue to defend a free Ukraine, a free economy, democracy and freedom of expression. I will do my best to prevent authoritarianism and censorship in Ukraine, “he added.

The Kremlin rejected Zelensky’s claim that Russia was involved in planning a coup in Ukraine. “Russia never intended to participate. In general, Russia is never engaged in this sort of thing,” Kremlin spokesman Dmitry Peskov said on a conference call on Friday. with journalists.

For weeks, Western officials have expressed growing concern over Moscow’s military activity on the Ukrainian border – with the United States considering sanctions if Russia invades Ukraine.

“We don’t know which president [Vladimir] Putin’s intentions are, but we know what happened in the past, “US Secretary of State Anthony Blinken said on a trip to Senegal last week, referring to acknowledged Russian military incursions. or not, in neighboring countries.

The head of the Ukrainian Defense Intelligence Agency, Brigadier General Kyrylo Budanov, told the US military newspaper Military Times that Russia is increasing manpower and weapon systems in Crimea for an offensive that could arise at any time. .

The Kremlin has repeatedly stated that Russia has no intention of invading Ukraine, accusing Western countries of “hysteria”.

The result will be presented in Kiev: Apple’s top managers will arrive in Ukraine