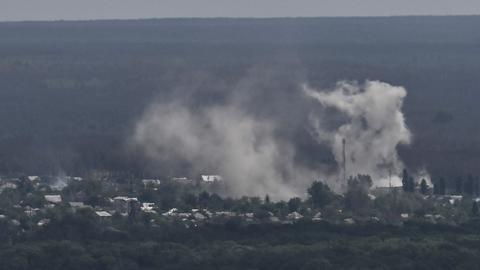 Ukraine predicts Russia will step up its attacks this week as EU leaders consider backing kyiv’s bid to join the bloc and Moscow continues its campaign – now in its 117th day – to take control from the east of the country.

Three people were injured and a search was underway for seven workers at the Chernomorneftegaz energy company, Sergei Askyonov, the Russia-backed Crimea chief, said in a message on Telegram.

Crimean officials said work on three drilling rigs was suspended after the hit, and fires were reported.

Explosions rocked the southern Ukrainian city of Odessa, a spokesman for the regional administration said.

The spokesman said he could not provide any details of the explosions, which were heard after the air raid sirens went off.

The Kremlin blames the gas crisis on Europe’s doorstep

The Kremlin said Europe was solely responsible for the gas market crisis and demanded the return of gas turbines used by the Nord Stream 1 gas pipeline.

Russian state-controlled gas company Gazprom cut capacity along Nord Stream 1 last week, citing the delayed return of equipment currently serviced by Germany’s Siemens Energy to Canada. Kremlin spokesman Dmitry Peskov told reporters that Russia had gas to supply but the equipment had to be returned first, adding that the recent crisis was of a “man-made” nature created by Europe.

“Russia remains the most reliable supplier. From a technical point of view, the mechanical infrastructure of this pipeline is under EU sanctions,” Peskov said. “We have gas, it is ready to be delivered, but the Europeans must return the equipment, which must be repaired as part of their obligations.”

Moscow’s separatist proxies claim to have captured Toshkivka, a town on the mostly Ukrainian-held west bank of the Siverskyi Donets River south of Sievierodonetsk, which has emerged as the main battleground town in recent weeks. TRT World’s Ali Mustafa has more pic.twitter.com/j0cEqmXf4P

“Russia has no right to threaten Lithuania”, according to Ukraine

Ukrainian Foreign Minister Dmytro Kuleba has slammed Russia after accusing Lithuania of imposing trade restrictions on the transit of EU-sanctioned goods to the Moscow enclave of Kaliningrad.

“Russia has no right to threaten Lithuania. Moscow only has to deal with the consequences of its unprovoked and unjustified invasion of Ukraine,” Kuleba wrote in a statement on social media. .

A Ukrainian court has banned the country’s largest pro-Russian political party and seized its assets across the country after the group was accused of undermining the country’s sovereignty.

The move comes after President Volodymyr Zelensky signed a decree in March banning the work of several parties identified by the security services as being pro-Moscow. An appeals court “has banned the activities of the political party Opposition Platform – For Life,” Ukrainian Justice Minister Denys Malyuska said in a statement on social media.

“The court decided to transfer all property, funds and other assets of the party to state ownership,” he added.

“We call on Russia to unblock the (Ukrainian) ports… It is inconceivable, one cannot imagine that millions of tons of wheat remain blocked in Ukraine while in the rest of the world people are suffering from hunger” , he told reporters.

“It’s a real war crime, so I can’t imagine it will last any longer,” he said as he arrived for a meeting of European Union foreign ministers in Luxembourg.

The meeting of EU foreign ministers has started in Luxembourg.

Following the European Commission’s recommendation issued last week, EU leaders are expected to assess whether to grant EU candidate status to Ukraine and Moldova at their 23 and June 24.

“The discussion will mainly focus on Ukraine’s application for EU membership since the leaders have to take a historic decision which also signals our values,” French Foreign Minister Catherine Colonna told reporters on her way to the meeting.

Ukraine claims to have lost control of the village of Sievierodonetsk

Ukraine said it lost control of a village adjacent to the eastern industrial city of Sievierodonetsk, at the center of weeks of fierce fighting with Russian troops.

“Unfortunately, we no longer control Metyolkine. And the enemy continues to build up its reserves,” Lugansk regional governor Sergiy Gaiday said in a statement on social media.

Germany is supporting Poland and Romania in adapting their railways to allow the export of millions of tonnes of grain blocked in Ukraine due to a Russian maritime blockade, German Foreign Minister Annalena has said. Baerbock.

“The railways need to be upgraded, we need the right freight carriages – the German government is working on this together with many other players,” she said as she arrived for a meeting with her European Union counterparts in Luxemburg.

“It is clear that in the end we will certainly not be able to get all the grain out, but if we manage to even get some of it out, on different routes, it will help us as we face this global challenge.”

Ukrainian President Volodymyr Zelenskyy has said he expects Russia to step up its attacks on his country as kyiv awaits the EU’s decision this week on granting Ukraine candidate status pic.twitter.com/xERVmPEcvI

China’s crude oil imports from Russia soared 55% from a year earlier to a record high in May, overtaking Saudi Arabia as the top supplier as refiners took advantage of cut-price supplies as part of the sanctions imposed on Moscow for its offensive in Ukraine.

Russian oil imports, including supplies pumped through the Eastern Siberian pipeline into the Pacific Ocean and sea shipments from Russian ports in Europe and the Far East, totaled nearly $8.42 million. tons, according to data from the General Administration of China Customs.

That equates to around 1.98 million barrels per day (bpd) and up a quarter from 1.59 million bpd in April.

The influx of Ukrainian refugees into the European Union could gradually ease labor shortages in the eurozone as some of those fleeing the conflict are expected to settle permanently, the European Central Bank has said.

“Under all assumptions detailed so far, the back-of-an-envelope calculations point to a median increase of between 0.2% and 0.8% in the euro area labor force over the medium term,” the statement said. ECB in an article in the Economic Bulletin. .

“This corresponds to an increase of between 0.3 and 1.3 million in the size of the eurozone labor force following the Ukrainian refugee crisis,” he added.

Ukrainian President Volodymyr Zelenskyy has warned that Russia risks intensifying its “hostile activity” this week, as kyiv awaits a landmark decision from the European Union on its membership application.

Nearly three months after Russia launched a bloody assault on her country, Zelenskyy said there have been “few decisions as fatal to Ukraine” as the one she expects from the EU this week, adding in his speech that “only a positive decision is in the interests of all of Europe.”

“Obviously, we expect Russia to intensify its hostile activities this week… We are preparing. We are ready,” he continued.

Ben Stiller meets Volodymyr Zhelensky in kyiv: “You are my hero”