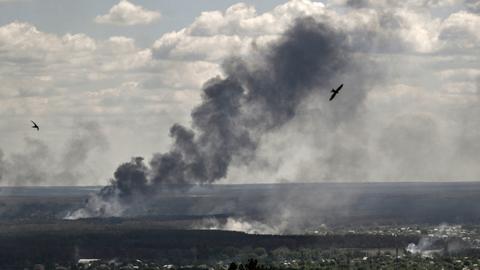 Meanwhile, Kremlin-backed officials in occupied southern Ukraine are beginning to issue Russian passports to residents as Moscow seeks to consolidate its authority over captured parts of the country amid its military offensive – which is now now on its 110th day.

Ukraine’s main industrial city of Sievierodonetsk was “de facto” blocked after Russian forces blew up the “last” bridge connecting it to its twin city Lysychansk, said Eduard Basurin, a representative of pro-Russian separatists .

“The Ukrainian units that are there, they are there forever. They have two options: surrender or die,” Basurin said. The towns of Sievierodonetsk and Lysychansk, separated by a river, have been targeted for weeks as the last areas still under Ukrainian control in the eastern region of Luhansk.

Taking Sievierodonetsk would pave the way for Moscow to another major city, Kramatorsk, in their moves to conquer the entire Donbass region, a predominantly Russian-speaking region partly held by pro-Russian separatists since 2014.

Both sides use heavier weapons in Ukrainian conflict (Finnish President)

Finnish President Sauli Niinisto has said both sides in the Ukrainian conflict are using heavier weapons, including, in Russia’s case, thermobaric bombs.

“We are supporting Ukraine with increasingly heavy weapons. And on the other hand, Russia has also started using very powerful weapons, thermobaric bombs which are in fact weapons of mass destruction,” Niinisto said. during security policy talks at his summer residence in Naantali, Finland.

Highlighting the horrors and risks of the conflict in Ukraine, the UN human rights chief warned of the global food, fuel and financial crises that risk plunging millions of people into food insecurity and poverty.

Speaking at the opening session of the 50th Human Rights Council, Michèle Bachelet said: “The war in Ukraine continues to destroy the lives of many people, causing havoc and destruction.

She said the social, economic and political ramifications of the conflict reverberate in the region around Ukraine and around the world, “with no end in sight”.

At least three people, including a child, were killed and four injured by Ukrainian artillery at a market in Ukraine’s breakaway Russian-backed Donetsk region, the provincial news agency said.

The Donetsk News Agency showed images of burning stalls at the Maisky Central Market and at least one body on the ground.

Ukrainian forces pushed back from the center of Sievierodonetsk: Kyiv

Ukraine said its forces had been pushed back from the center of the eastern city of Sievierodonetsk, where fighting with Russia had been raging for weeks.

“The enemy, with artillery support, carried out assault operations in the city of Sievierodonetsk, had partial success, pushed our units from the city center,” the Ukrainian military said on Facebook. .

Ukrainian miner Ferrexpo Plc said it was cutting its iron ore output after a haul road in the country’s southwest was damaged due to the country’s ongoing conflict, impacting on the group’s exports to European customers.

The Swiss-based company and the world’s third-largest exporter of iron ore pellets also said it was in advanced talks with other Central European port operators for seaborne exports, with Ukraine’s Black Sea ports remaining. closed.

The London-listed group added that the additional damage caused by the conflict had reduced its ability to use its barge operations, which accounted for 0.8 million tonnes of iron ore deliveries in 2021.

Ukrainian and Russian forces fight for ‘every meter’ in Sievierodonetsk

Ukrainian and Russian forces are fighting “literally every yard” in Sievierodonetsk, President Volodymyr Zelenskyy said, as fighting intensified in an eastern region where the country’s commander-in-chief said the land “was covered in blood”.

Sievierodonetsk and the nearby town of Lysychansk have been targeted for weeks as the last areas of the Luhansk region still under Ukrainian control.

Russia’s massive artillery in this region has given it a tenfold advantage, said Valeriy Zaluzhny, commander-in-chief of the Ukrainian army. But, “despite everything, we continue to occupy positions”, he said.

Russia earned $98 billion (93 billion euros) from fossil fuel exports in Ukraine’s first 100 days, with most going to the European Union, according to a research report.

The report by the Finland-based Independent Research Center for Energy and Clean Air (CREA) comes as kyiv urges the West to cut off all trade with Russia in hopes of cutting the financial lifeline of the Kremlin.

“The repeated shelling of residential areas of Kharkiv are indiscriminate attacks that have killed and injured hundreds of civilians, and as such constitute war crimes,” the rights group said in a report on the second most major city in Ukraine.

“This is true both for strikes carried out using cluster munitions and for those carried out using other types of unguided rockets and unguided artillery shells,” he said. he said, adding, “The continued use of such imprecise explosive weapons in populated civilian areas, knowing that they repeatedly cause large numbers of civilian casualties, may even amount to directing attacks against the civilian population.”

Ukrainian artists respond with song to the Russian massacre