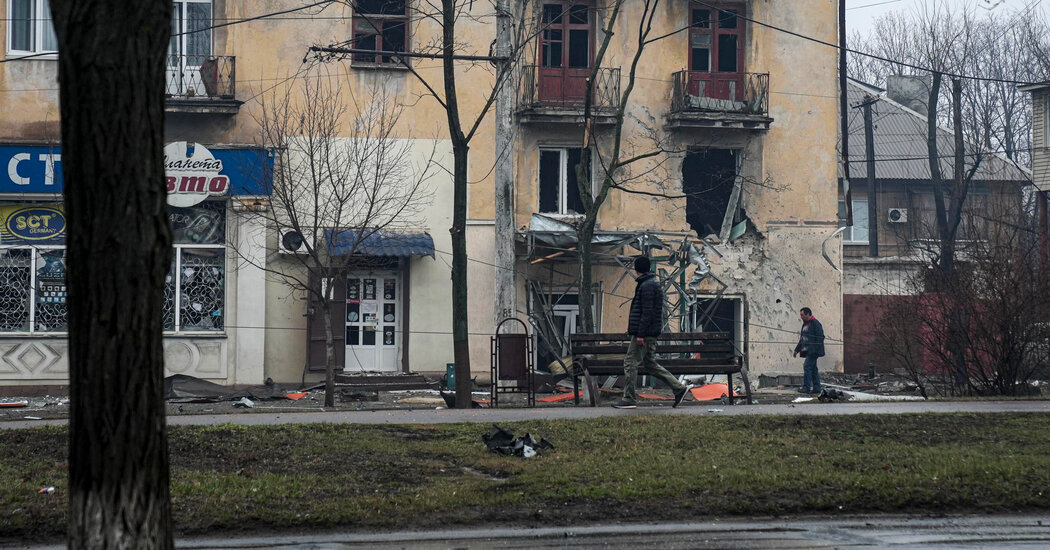 Sixteen days earlier, Oleksandr Abramenko was in China celebrating his silver medal – the only medal of any kind won by Ukraine at the Beijing Winter Games.

Abramenko, one of freestyle skiing’s top acrobats, a five-time Olympian and the country’s flag bearer for the opening ceremony, garnered more attention after the event when a photo of him cuddling with a Russian rival been widely disseminated.

On Friday evening in Kyiv, Abramenko, 33, was in the parking lot of his building with his wife, Alexandra, and their 2-year-old son, Dmitry.

Thousands of people tried to flee the city, causing large crowds and chaos at Kyiv’s main train station as the Ukrainian military said the Russian military’s main objective was to encircle the capital.

During a text chat with The New York Times, Abramenko asked someone to take a photo of his family, sitting on a mattress all bundled up against the cold. Dmitry sucked on a pacifier.

It was their seventh night sleeping in the garage, thinking it was safer than their 20th-floor apartment above, not far from the city’s main airport.

“We spend the night in the underground car park, because the air attack siren is constantly on,” Abramenko wrote during the exchange. “It’s scary to sleep in the apartment, I myself saw from the window how the air defense systems worked on enemy missiles, and loud explosions were heard.”

On Friday, amid the scramble to ditch Kyiv, Abramenko knew it was time to leave, heading for an unknown future. The family planned to travel to the western tip of Ukraine, near the borders of Slovakia and Hungary, on Saturday. In the best case, it can take 10 hours.

“I plan to go see my trainer, Enver Ablaev, he lives in Mukachevo, in the Transcarpathian region,” Abramenko said. “I go by car, I take with me essential things, food and my Olympic medals.”

Beyond his new silver medal, Abramenko won a gold medal in 2018.

The small world of aerialists tries to provide comfort. Swiss athletes, including former Olympic freestyle skier Andreas Isoz, have raised funds and planned to travel this weekend to Mukachevo, or as close to the Ukrainian border as possible, to hand over supplies.

Abramenko isn’t sure what the next few days will bring. He worries about his parents, who live in Mykolaiv, a port city on the Black Sea where Abramenko was raised. It lies between the occupied city of Kherson and Odessa, which is expected to be a key Russian target.

“Fighting is already underway in Nikolaev,” Abramenko wrote, using an alternate spelling for the city. “My parents are sitting at home and hearing explosions. It’s dangerous to leave Nikolaev at the moment, they want to be there. Maybe I could leave later.

Abramenko’s quest is to travel to Mukachevo “to think about my next steps”. He does not know if his wife and son will cross the border as refugees, like more than a million other Ukrainians. He just knows that, like all men his age, he cannot leave Ukraine.

“I don’t know if I’ll go to war or not, I don’t know what process the guys who are being called up are going through,” he wrote. “At the moment, our army is fully coping with the offensives of Russian soldiers and equipment.”

After a few hours of sporadic messages, Abramenko’s replies to Kyiv came to a halt. It was almost midnight there.