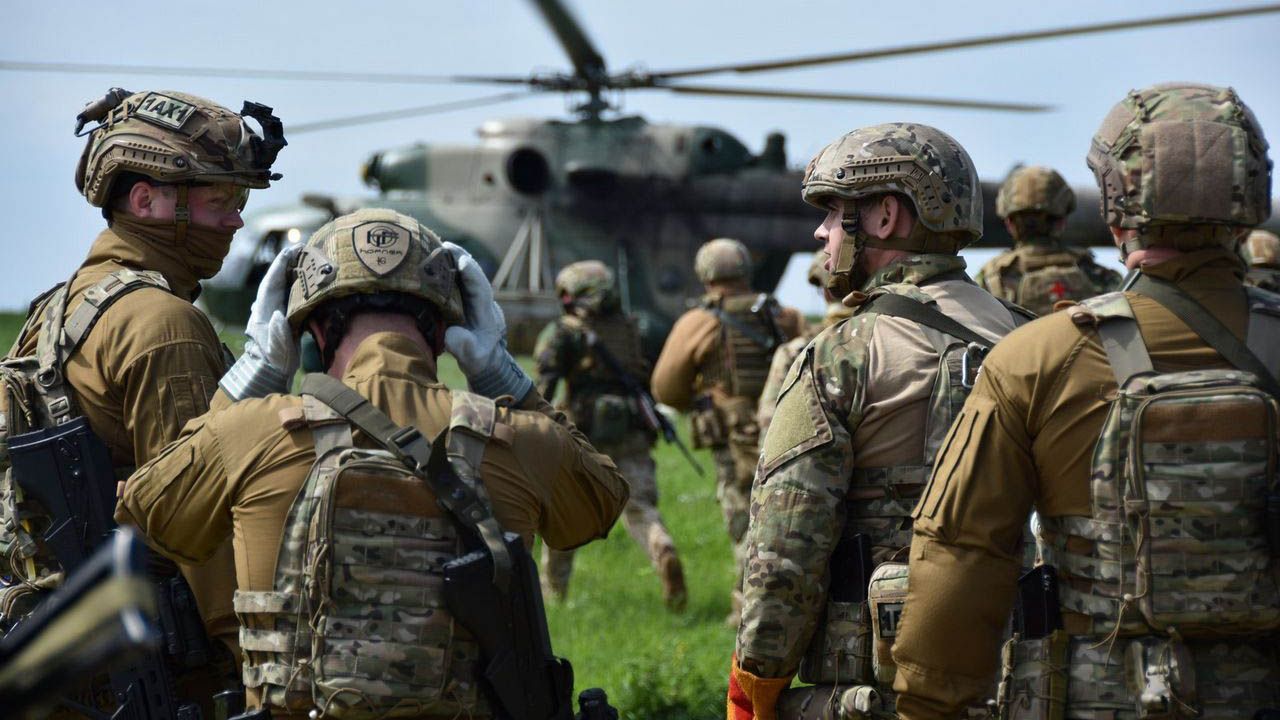 The armed forces of Ukraine and the United Kingdom (UK) are expected to begin a series of military exercises known as â€œOperation Cossack Maceâ€ this week. The exact dates of the exercises have not been announced but the Russian Nezavisimaya Gazeta reported on Tuesday that they were already underway.

The joint military exercises were named after Ukrainian Cossack General Bohdan Khmelnytsky, who led a 1648 Cossack uprising against the Polish-Lithuanian Commonwealth that resulted in the massacre of thousands of Jews.

While the stated aim of the exercises is “to improve compatibility between British and Ukrainian military formations, strengthen mutual relations, joint planning and conduct battalion and tactical operations”, they are clearly aimed at preparing a land conflict with Russia.

In addition to Ukraine and the United Kingdom, military personnel from the United States, Denmark, Sweden and Canada will also participate in the planned exercises.

Set just two weeks after a dangerous naval incident in the Black Sea in which Russian patrol boats fired warning shots at the British destroyer HMS Defender, after it had provocatively entered waters claimed by Russia in off the Crimean Peninsula, the exercises are sure to further ignite relations between Russia and Ukraine.

While Ukraine and NATO often claim that their military exercises are “defensive” in nature, “Cossack Mace” differs in that he openly states that his forces are training for an offensive. According to the press release of the Ukrainian Armed Forces (AFU): “defensive actions will be developed, followed by an offensive to restore the borders and territorial integrity of the country which has been attacked by a hostile neighboring state”, clearly referring to Russia .

In February this year, Ukrainian President Volodymyr Zelensky approved a strategy to reclaim Crimea, a Black Sea peninsula annexed by Russia in March 2014, following a sustained far-right coup by the imperialists in the Ukrainian capital Kiev. The move sparked a major military crisis in the Black Sea region in April. Zelensky recently provocatively threatened to impose a total blockade on the territories in eastern Ukraine controlled by Russian-backed separatists.

In addition to this week’s exercises, later in July Ukraine, the United States, Poland and Lithuania will participate in another ground military exercise known as “Three Swords 2021”, which would include more than 1 200 soldiers and more than 200 combat vehicles.

This week, Zelensky also announced that the country will receive Mark VI high-speed combat boats from the United States in the coming year.

In its continued provocations against Russia, the Zelensky government is largely motivated by a worsening domestic crisis.

Zelensky, who was first elected primarily to reject the militarist policies of former President Petro Poroshenko, not only continued but also intensified the unpopular policies of his predecessor. Europe’s poorest country remains mired in an ongoing civil war in eastern Ukraine that has left 14,000 dead, 1.4 million displaced and left 3.5 million people in need of assistance humanitarian.

The social and political crisis has been exacerbated by the coronavirus pandemic and its economic fallout. A recent opinion poll by the Kyiv International Sociological Institute found that 52.7 of Ukrainians now disapprove of Zelensky’s administration.

Ongoing military exercises and equipment purchases indicate that Ukraine is continuing to integrate its military forces with Western imperialism. However, the Ukrainian ruling class has yet to receive any assurances that it will ever be officially included in NATO. Ukraine’s continued failure to receive an official invitation has left Ukraine’s ruling class apoplectic.

Earlier in June, US President Joe Biden and Secretary of State Antony Blinken rejected Zelensky’s statement on Twitter that Ukraine had secured a NATO spot at the alliance’s annual summit in Belgium. Zelensky wrote: â€œCongratulate @NATO partners for understanding all the risks and challenges we face. NATO leaders have confirmed that [Ukraine] will become a member of the Alliance and #MAP is an integral part of the membership process. {Ukraine]deserves due recognition for its role in ensuring Euro-Atlantic security.

Minutes later, Zelensky’s comments were contradicted by US President Biden who said: â€œIt depends on whether they meet the criteria. The point is, they still have to clean up the corruption. The point is that they have to meet other criteria to enter the action plan. And so, you know, the school is on this issue. That remains to be seen. ”

Regarding the status of Ukraine, Secretary of State Antony Blinkin said that “nothing has changed – it dates back to 2008”, referring to a 2008 NATO conference which first proposed that the he former Soviet republic could potentially join it one day. To do this, Ukraine should receive an official action plan for membership, which, despite Zelensky’s begging, has not yet taken place.

Meeting of the Basic Safety Committee for Educators

The Delta variant is sweeping through schools as the unions do nothing to oppose it. Educators must take independent action.

While NATO Secretary General Jens Stoltenberg had previously expressed optimism about Ukraine’s chances of joining NATO, his stance changed following Biden’s comments and said the Ukraine had to “do more” and that the entry of Ukraine “was not at the center of this summit”.

Prior to the US-backed coup in 2014, Ukraine maintained a non-aligned status vis-Ã -vis NATO. In 2014, it embarked on a process of integration with NATO. In February 2019, the Ukrainian government adopted a constitutional amendment, declaring its commitment to join both NATO and the EU and in June of last year became a member of the Enhanced Opportunities Partnership Program of the NATO.

US-Ukraine relations were further strained in May when the Biden administration announced that it would not, for the time being, impose additional sanctions on the Russian-German Nord Stream 2 pipeline. Zelensky complained about learning of the decision through the press and not through direct contact with the Biden administration. Speaking to Axios, Zelensky said he was “very unpleasantly surprised” by Washington’s decision.

Completing the pipeline could cost the Ukrainian government billions of dollars in annual transit charges levied on Russian gas destined for European consumers.

Another major point of contention is Ukraine’s growing relationship with China. In March, after years of pressure from the United States, the Ukrainian government seized the assets of the country’s main aerospace company, Motor Sich, in an attempt to prevent Chinese investors from acquiring the company. The United States had denounced the decision of the Chinese aviation company Skyrizon to acquire a majority stake in the Ukrainian company, declaring that these “predatory investments and technological acquisitions in Ukraine represent an unacceptable risk of diversion towards a military end use”.

Despite obvious US interference, Zelensky denied any pressure from his main NATO military backers.

After several public rebuttals of Ukraine’s NATO aspirations in recent months, the Ukrainian government has notably sought to redeem itself with China by signing an infrastructure agreement that will see Chinese companies working on road projects, bridges and rail transit in Ukraine. Speaking to World time On Sunday, Song Kui, president of the Contemporary China-Russia Regional Economy Research Institute, said, â€œIf Kiev can recognize the situation and get rid of the country’s dependence on the West, the prospects for Sino-Ukrainian cooperation are good.

The deal was only reached after Ukraine agreed to withdraw its signature from a joint international declaration calling for allowing independent observers to investigate alleged human rights violations against Uyghurs in the Chinese region of China. Xinjiang. The allegations have been regularly promoted by the United States as a foreign policy weapon against Beijing. While the deal was signed at the end of June, the Kiev government only made it public this week.

Ukraine: balancing China and the rest