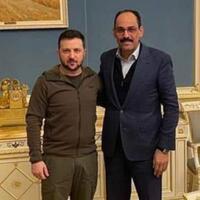 Kalın, accompanied by a delegation including Deputy Foreign Minister Sedat Önal, met with Zelensky and his top advisers on April 30. The Turkish delegation also met Turkish citizens in Kyiv and representatives of the Crimean Tatars during an iftar dinner hosted by the Turkish Ambassador.

“Our main goal is to end this war through negotiation and dialogue. But as the war continues, conditions become more difficult. In particular, ending attacks on civilians requires much more urgency,” Kalın told Turkish media in Kyiv.

He explained that he had discussed with Zelensky all these issues and the need to evacuate Mariupol by creating humanitarian corridors, informing that Ukrainian officials thanked Turkey for its support to their country since the beginning of the war.

Turkey had gathered Russian and Ukrainian officials in March and April in Antalya and Istanbul respectively, but no breakthrough could be achieved. “The continuation of the Istanbul Process can play a key role in ending this war. We are intensively pursuing our work towards this end,” he said.

Also informing about President Recep Tayyip Erdoğan’s talks with UN Secretary General Antonio Guterres, Kalın said that these meetings aimed to clarify the role the UN will play on the humanitarian dimension of the crisis, including the evacuation of civilians and the delivery of aid.

He noted that everyone must work cooperatively to see an end to the war, urging to avoid actions that could prolong the conflict in Ukraine. When asked, the adviser said Turkey’s contacts with Russia are also continuing, as mediation efforts require keeping in touch with both sides.