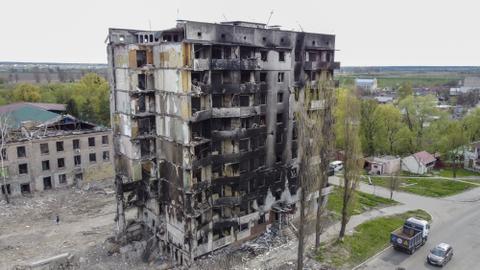 “It is a challenge for the entire free world to ensure that this (support) will be provided,” said European Investment Bank President Werner Hoyer.

A senior EU official has backed a multi-trillion euro ‘Marshall’ style plan to rebuild Ukraine, pledging the firepower of the EU’s lending arm for what he said will be a global rescue effort .

Werner Hoyer, president of the European Investment Bank, said Europe should not be left alone to pay the huge bill which he said could run into the trillions.

Under the post-war American program known as the Marshall Plan, the United States granted Europe the current equivalent of some $200 billion over four years in economic and technical aid.

Addressing the need for a similar program for Ukraine, Hoyer said the cost of rebuilding the country had been discussed in recent meetings at the United Nations, International Monetary Fund and World Bank in Washington.

“What will rebuilding, rebuilding Ukraine cost? Numbers were flying around the room…but one thing is clear to me: we’re not talking millions but trillions,” said Hoyer, a former German minister. of Foreign Affairs under Chancellor Helmut. Kohl after the fall of the Berlin Wall.

Hoyer’s remarks highlight how the European Union is preparing to deal with the ever-increasing economic impact of the conflict, using the clout of the pan-national European Investment Bank, which typically funds infrastructure such as roads and bridges. .

“It’s a challenge for the whole free world to make sure that this (support) will be provided,” said Hoyer, one of Germany’s top European Union officials.

“Political leaders need to make up their minds as soon as possible,” Hoyer said. “But I think we need a structure that really targets a global audience and not just European Union taxpayers.”

The debate is taking place against the backdrop of the conflict in Ukraine and an increasingly tense standoff between Moscow and Brussels, which has backed tough sanctions to isolate Russia.

Earlier today, Ukraine’s Finance Minister Serhiy Marchenko said the country’s economy is expected to shrink by nearly half this year.

Researchers from Economic Policy Research, a network of economists, estimate that the cost of rehabilitating Ukraine is already $530 billion to $630 billion, more than triple its annual economic output before the attack.

Hoyer said a key part of the plan would be for major state-sponsored Western banks to provide “guarantees” that would guarantee the Ukrainian government once the conflict is over.

This should help Kyiv regain access to global debt markets and speed up its reconstruction.

“If we’re going to get the investment community to give us their money…then we have to reassure them,” Hoyer said, referring to heavy loss safeguards for investors.

“I am convinced that the capital markets will be open to this.”