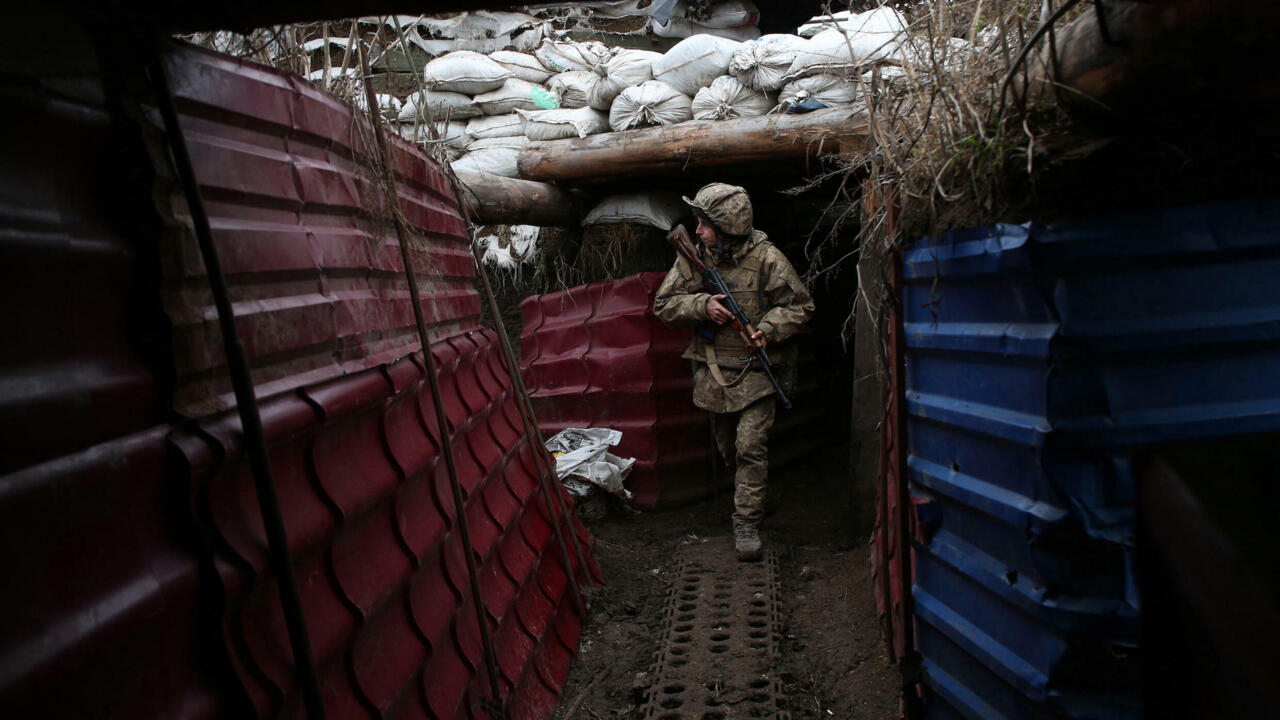 Pisky (Ukraine) (AFP) – Ukrainian soldiers fighting pro-Russian rebels on the country’s eastern front line claim that only NATO membership can protect Kiev from Russia, as the West tries to dissuade Moscow from launching an attack.

Stationed in the heavily damaged village of Pisky just outside the breakaway stronghold town of Donetsk, soldiers patrol the trenches in freezing weather.

Behind them stand residential houses destroyed by nearly eight years of war, abandoned Soviet-era cars still in their garages.

Fears have mounted in recent weeks that Russia – which has massed around 100,000 troops on its side of the border – could launch a full-scale attack.

The United States and its allies have warned Moscow of unprecedented sanctions if its troops launch an offensive.

But the soldiers say NATO membership – not the sanctions – will help them.

Viktor, 56, who served in the Soviet army as a youth, once saw NATO as an enemy.

But today, there is no doubt that Ukraine must join the Western alliance, set up to counter the Soviet Union.

“If Russia launches an attack on us, it will be very difficult for us to fend for ourselves,” said the mustached soldier, who held a Kalashnikov to his chest.

He said NATO did not seize Ukraine because “it does not want to escalate the conflict with Russia”.

The Kremlin has warned that its former southern neighbor’s membership in the alliance is a red line for Moscow.

Much to Ukraine’s chagrin, the United States and European countries have made it clear on numerous occasions that Kiev’s NATO membership is not being considered.

But Washington is helping train Ukrainian forces and has committed more than $ 2.5 billion to bolster an army that collapsed in the face of Russia’s annexation of Ukraine’s Crimean peninsula in 2014.

“Rely only on ourselves”

Instead, Western countries have threatened Russia with a coordinated massive sanctions response if Ukraine comes under attack.

But for soldiers on the front lines, sanctions are not enough.

They say Russia’s stance on Ukraine has not changed since the multiple rounds of sanctions imposed on Moscow since 2014.

Moscow continues to support separatists in eastern Ukraine in a conflict that has so far claimed more than 13,000 lives.

Vladyslav, 22, believes that only membership in NATO can save Ukraine.

“If a country like Russia, an aggressor, invades our territory, then the NATO family will have to help us with troops and weapons,” the young soldier told AFP.

Another, also named Viktor, said Western sanctions had not been effective and “are not causing significant damage to the Russian economy.”

Ukrainian President Volodymyr Zelensky, who met with EU and NATO leaders in Brussels this week, said he would prefer sanctions to be imposed before – rather than after – Russia’s actions.

“To be honest, no one is particularly interested in the politics of sanctions” after the invasion, he said in Brussels.

He called on the West to adopt â€œpowerfulâ€ sanctions without delay.

In the trenches of eastern Ukraine, many soldiers are disappointed with what they believe to be a slow western response.

The West “pursues its own interests,” said Andriy, 49, a former miner who spent six years fighting the separatists.

â€œIt’s better to rely only on ourselves,â€ he says.

In strength and in arms: Ukrainian army faces long chances of confrontation with Russia