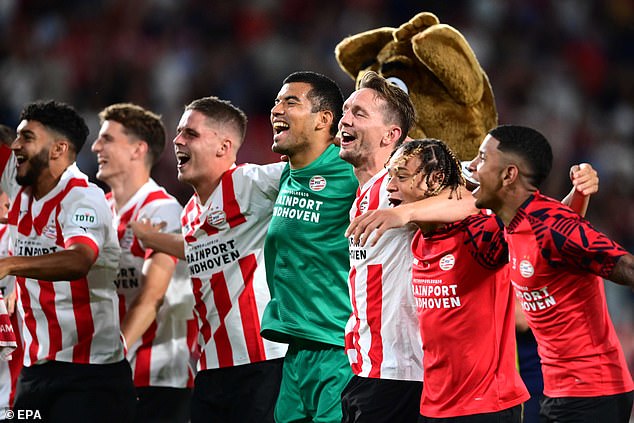 PSV Eindhoven needed an extra-time goal from Luuk de Jong to beat Monaco 4-3 on aggregate and set up an intriguing Champions League play-off tie with Rangers.

Behind Monaco in the 89th minute, the 1988 European champions equalized through Erick Gutierrez to level the game at 2-2 before De Jong’s 109th-minute goal. UEFA scrapped the away goals rule last year, so Monaco did not advance as the aggregate score was 3-3 after regular time.

PSV boss Ruud van Nistelrooy will now face compatriot Giovanni van Bronckhorst, whose side pulled off a brilliant comeback to defeat Belgian minnows Union Saint-Gilloise after leading 2-0 from the first leg – winning 3-0 in Glasgow and 3-2 on aggregate.

Meanwhile, Dynamo Kyiv’s unlikely run to the Champions League continued with an extra-time win over Sturm Graz in the third qualifying round on Tuesday.

The Ukrainian club are now two games away from the lucrative Champions League group stage as they face a play-off against Benfica over the next two weeks.

Goals from defender Kostiantyn Vivcharenko in the 97th minute and midfielder Viktor Tsyhankov in the 112th gave Dynamo a 2-1 win in Austria and a 3-1 win on aggregate.

Dynamo’s four Champions League qualifying games in the last 20 days are the only competitive games he has played all year due to Russia’s presence in his home country. Ukrainian clubs also rely on depleted rosters with little hope of attracting players from other countries.

For the second qualifying round in a row, Dynamo needed extra time and late goals in the first leg to qualify.

The next challenge for Dynamo and veteran manager Mircea Lucescu is a home-and-away game against Benfica as they bid to join Shakhtar Donetsk in the Champions League group stage. Shakhtar earned their place at the top of the Ukrainian Premier League when it was dropped last season due to war.

Dynamo will host Benfica in the first leg next week in Lodz, Poland, where they will play their ‘home’ fixtures in European competition. Russian teams have been banned from UEFA and FIFA competitions.

Benfica beat Midtjylland 7-2 on aggregate with a 3-1 win at Denmark on Tuesday.

Sheriff was knocked out on Tuesday and will not return to the group stage where his debut season began a year ago with wins over Shakhtar and eventual champions Real Madrid.

The Moldovan champions lost 2-1 at Viktoria Plzen to lose 4-2 on aggregate to the Czech champions.

Plzen will next face Qarabag in the playoffs after the Azerbaijani title-holder upset Ferencvaros 3-1 in Budapest to advance 4-2 on aggregate.

Norwegian club Bodo/Glimt are forging a European reputation after reaching the quarter-finals of the Europa Conference League last season, and qualifying for the Champions League with a 1-1 draw in Lithuania who completed a 6-1 aggregate win over Zalgiris.

Bodo/Glimt will host Dinamo Zagreb next week after the Croatian champions’ 4-2 win at home to Ludogorets made it 6-3 on aggregate.

Red Star Belgrade, winner of the 1991 European Cup, won 2-0 at Pyunik in Armenia for an aggregate score of 7-0

Maccabi Haifa await Red Star in the playoffs, despite losing 2-0 in Cyprus to Apollon. Maccabi won the first leg 4-0.

The domestic champions who were knocked out on Tuesday now move on to the Europa League qualifiers next week.