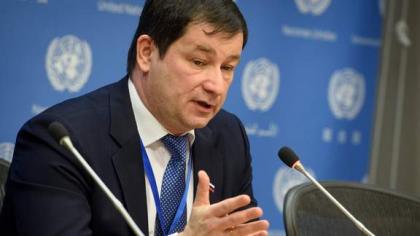 Encouraging Ukraine to enter into meaningful peace negotiations with Russia would be the best help the West can give kyiv, Russia’s deputy envoy to the UN Dmitry Polyanskiy said on Friday.

WASHINGTON (UrduPoint News/Sputnik – July 15, 2022) Encouraging Ukraine to enter into meaningful peace negotiations with Russia would be the best help the West can give to Kyiv, Russia’s deputy envoy said on Friday. UN, Dmitry Polyanskiy.

“I think the best support for Ukraine that Western countries, including the United States, could give would be to bring some reasoning to the political planning and actions of the Ukrainian leadership to begin meaningful and serious peaceful negotiations. with Russia on the terms of the ceasefire,” Polyanskiy told TNT Radio in an interview.

Russia has repeatedly denounced the West for sending Ukraine billions of dollars worth of weapons, noting that this fuels the fire and only prolongs the conflict. Moscow warns that any shipment containing weapons destined for Ukraine will be a legitimate target for Russian armed forces.

On February 24, Russia launched a special military operation in Ukraine after the people’s republics of Donetsk and Luhansk requested help to defend against intensified attacks by Ukrainian troops. The two countries have since held several rounds of peace talks but failed to reach an agreement.