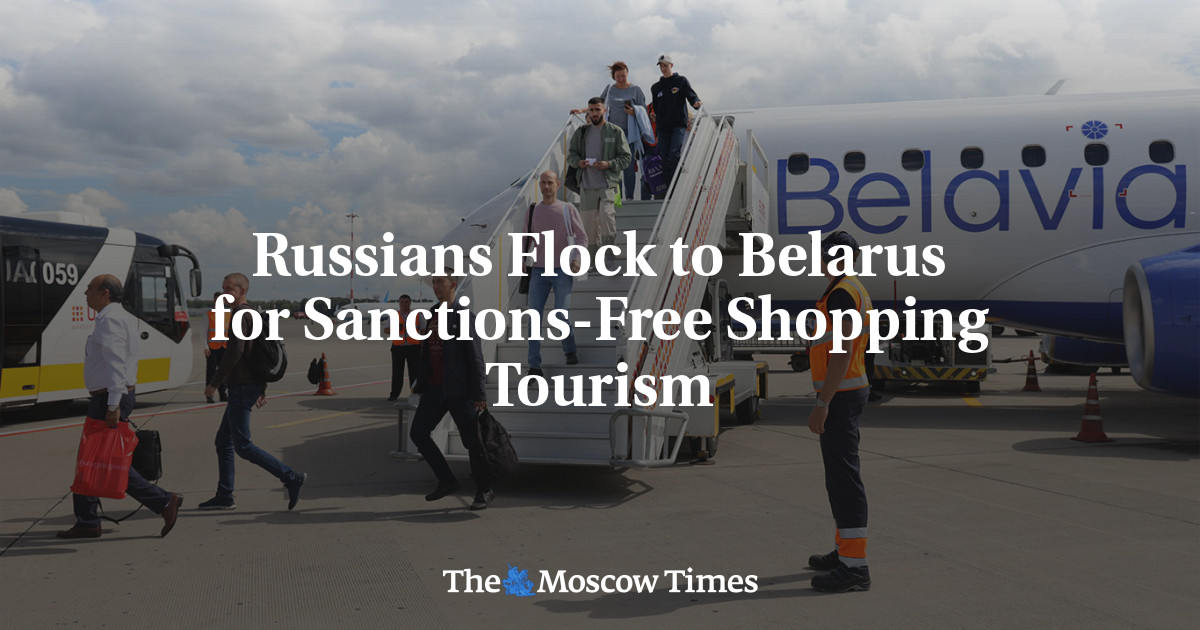 A growing number of Russians are choosing neighboring Belarus for their next vacation in an effort to access Western financial goods and services that are no longer available back home due to sanctions imposed on Moscow following the invasion of Ukraine.

Unlike Russia, most foreign retailers and major payment companies maintain a presence in former Soviet Belarus which is often dubbed “Europe’s last dictatorship”.

“Brands like H&M, Bershka and Pull & Bear have left Russia, but we [who travel to Belarus] can dress from head to toe,” said Yelena Shitikova, executive of the Arkhangelsk region travel agency Family Travel, which offers tours in Belarus.

“Everything works there, there are no penalties,” she added.

With several daily flights and trains between Moscow and Minsk, Belarus has become an increasingly popular destination for Russians looking to purchase Western goods or open a bank account that will issue Visa or MasterCard debit cards that are not no longer available in Russia.

Ruled by close Kremlin ally Alexander Lukashenko, Belarus was used as a staging area for Russian troops and missile launchers during the invasion of Ukraine. But despite concerns voiced by Kyiv – Lukashenko has refuse the Belarusian army entered Ukrainian territory, allowing Minsk to avoid the harshest Western sanctions. –

Travel agency FUN&SUN launched four-day shopping tours in the Belarusian capital, Minsk, at the end of August, priced at 16,750 rubles ($279) per person.

“Tourists started to visit Belarus more often and we also noticed that they were shopping among other things, so we decided to offer this product,” a FUN&SUN spokesperson told the Moscow Times.

“The demand was very strong for the first trip and for the following ones as well.

Travel agent Shitikova said she fell in love with Belarus after visiting earlier this year.

Upon her return to Russia, she noticed an “unexpected” demand for trips to the country and decided to offer special tours to clients of her agency.

“It all came together [with Belarus]: no language barrier, the opportunity to have a great shopping experience and enjoy clean and beautiful sights,” she told the Moscow Times.

“No issues, great food and I also think it’s a very affordable destination.”

More than 1,200 foreign companies have completely withdrawn or limited their operations in the Russian market since the start of the war in Ukraine in February, according to the data compiled by the Yale University School of Management, making it much more difficult to obtain many Western products.

Among those companies are the world’s largest fast fashion and luxury retailers whose closure has left malls across Russia with rows of empty stores.

FUN&SUN customers traveling to Belarus can satisfy their craving for foreign brands by spending an entire day in shopping malls in Minsk where brands such as ZARA, Massimo Dutti, Calvin Klein and Levis are widely available, according to an itinerary for visits from business shopping in Belarus seen by The Times of Moscow.

The other attraction of vacationing in Belarus for some Russians is the ability to open a local bank account that will issue Visa and Mastercard bank cards.

After international payment companies left the Russian market to protest the invasion of Ukraine, Russians can no longer make purchases on foreign websites or use their cards abroad.

The number of requests for payment cards made by Russian citizens at Belarusbank, the country’s largest bank, increased by more than 50% in the first four months of the war, according to information published by the Office Life news portal.

Tourists on a shopping tour with FUN&SUN can open a Belarusian bank account on the first day of their visit right after a welcome cocktail at the four-star Minsk hotel in the heart of the Belarusian capital, according to the official itinerary.

The Visa or Mastercard debit card can be picked up two days later.

But some Russians have found it harder to open a bank account in Belarus.

“My friends and I were looking to open a bank account, but it seems we weren’t the first to come up with this ‘brilliant’ idea and the banks introduced restrictions,” said Denis, a 33-year-old product manager. originally from Moscow who recently visited Belarus.

Among the requirements of Belarusian banks are a local phone number and a permanent minimum account balance of at least 30,000 rubles ($500), according to Denis, who declined to give his last name for security reasons.

“We finally decided not to open the accounts because [Russian payment system] Anyway, Mir mainly works in Belarus. If we end up going to Turkey for vacation this year, we will only use cash,” he told the Moscow Times.

Belarus is not the only country attracting Russians looking to combine leisure travel with opening a bank account abroad.

Other popular destinations for so-called “bank tourism” are Armenia, Kazakhstan, Uzbekistan and Turkey.

The first “organized bank” roundentitled “For Visa to Uzbekistan” was presented by the VEDI Group agency in March.

But travel agent Shitikova said easily accessible Belarus has untapped tourism potential, even beyond that of bank cards, Western brands and the Soviet-era sanatorium the country is often associated with by those who grew up under the communist regime.

“I don’t want the tourists I work with to associate Belarus only with sanatoriums. It is an extremely beautiful country that I personally want to keep coming back to,” she said.