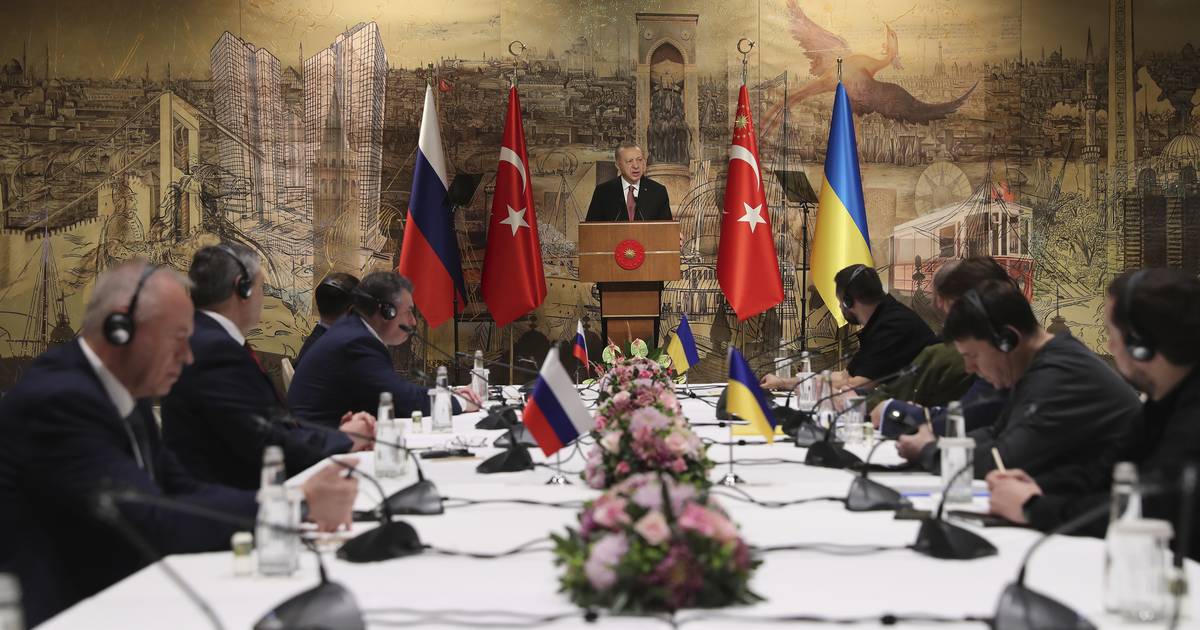 KYIV, Ukraine – The Russian military said on Tuesday it would “fundamentally” scale back operations near the Ukrainian capital and a northern town, as talks highlighted a possible deal to end a war rough and brutal.

Deputy Defense Minister Alexander Fomin said the move was aimed at boosting confidence in the talks after several rounds of failed talks to end the conflict turned into a bloody campaign of attrition.

Fomin said Moscow had decided to “basically…reduce military activity in the direction of kyiv and Chernihiv” to “increase mutual trust and create conditions for new negotiations.”

It seemed like a gesture of goodwill, but also comes as Russian troops have been bogged down and struggled to make major advances on the ground recently in the face of strong Ukrainian resistance, thwarting Russian President Vladimir Putin’s aim. of a quick military victory.

The Ukrainian military said it noted withdrawals around Kyiv and Chernihiv, although the Pentagon said it could not corroborate the reports,

Earlier talks, held in person in Belarus or by video, failed to bring an end to a more than month-long war that has killed thousands and driven more than 10 million Ukrainians from at home, including nearly 4 million from their country.

But Fomin suggested there had been progress on Tuesday, saying “negotiations on preparing an agreement on Ukraine’s neutrality and non-nuclear status, as well as on granting security guarantees to Ukraine, turn to practical matters”.

The Ukrainian team, meanwhile, has laid out a detailed framework for a future peace agreement under which the country would remain neutral but its security would be guaranteed by a group of third countries, including the United States, Britain, France, Turkey, China and Poland, in an arrangement similar to the NATO principle that “an attack on one is an attack on all”.

Ukraine is also reportedly willing to hold 15-year talks on the future of the Crimean peninsula, which was seized by Russia in 2014, with both countries agreeing not to use their armed forces to resolve the dispute. problem in the meantime.

Russia’s views on the proposals were not immediately clear.

Ahead of the talks, President Volodymyr Zelenskyy said his country was ready to declare its neutrality. Moscow has demanded that the country give up hope of joining NATO, which it sees as a threat. Zelenskyy also said he was open to compromise on the disputed eastern region of Donbas – comments that could give impetus to the negotiations.

But even as negotiators gathered in Istanbul, Russian forces struck an oil depot in western Ukraine and demolished a government building in the south, killing several people.

A missile hit the oil depot on Monday evening, the second attack on oil facilities in an area that has been spared the worst of the fighting. On Tuesday morning, an explosion tore a hole in a nine-story administrative building in Mykolaiv, a southern port city that Russia has tried unsuccessfully to capture.

Seven people died in the missile attack and 22 were injured, Zelenskyy said in a speech to Danish lawmakers.

“It’s terrible. They waited for people to go to work” before hitting the building, regional governor Vitaliy Kim said. “I overslept. I’m lucky.”

— The head of the United Nations nuclear watchdog arrived in Ukraine to try to ensure the safety of the country’s nuclear facilities. Russian forces took control of the disused Chernobyl power plant, site of the world’s worst nuclear accident in 1986, and the active Zaporizhzhia power plant, where a building was damaged in the fighting.

– Russia has destroyed more than 60 religious buildings across the country in just over a month of war, with most of the damage concentrated near kyiv and in the east, the Ukrainian military said in a message on Tuesday .

– Bloomberg News said it suspended operations in Russia and Belarus. Clients in both countries will not be able to access any Bloomberg financial products and Russian securities trading features have been disabled in accordance with international sanctions, he said.

— In the Istanbul talks room was Roman Abramovich, a longtime Putin ally who was sanctioned by Britain and the EU. Kremlin spokesman Dmitry Peskov said Chelsea football club owner was serving as an unofficial mediator approved by the two countries – but the mystery over his role was deepened by reports he may have been poisoned in a previous round of talks.

In fighting that turned into a stalemate, Ukrainian forces recaptured Irpin, a key suburb northwest of the capital, Kyiv, Zelenskyy said Monday evening. But he warned Russian troops were regrouping to retake the area.

He also lambasted Western countries, which he repeatedly accused of not going far enough to punish Moscow with sanctions or support Ukraine. The West’s reluctance to supply weapons makes these nations partly responsible for the destruction caused, he said.

“Fear always makes you an accomplice,” he said.

Besides Irpin, Ukrainian forces have also regained control of Trostyanets, south of Sumy in the northeast, after weeks of Russian occupation that left a war-torn landscape.

Arriving in the city soon after on Monday, The Associated Press saw the bodies of two Russian soldiers abandoned in the woods and Russian tanks burned and twisted. A red “Z” marked a Russian truck, its windshield fractured, near stacked ammunition crates. Ukrainian forces packed into a tank showed signs of victory. Dazed residents lined up amid charred buildings to ask for help.

It is not known where the Russian troops went, under what circumstances they fled and whether the city will remain free from them.

Ukraine, meanwhile, said it would attempt to evacuate civilians from three southern towns on Tuesday. Deputy Prime Minister Iryna Vereshchuk said humanitarian corridors would start from heavily bombed Mariupol as well as from Enerhodar and Melitopol. These last two cities are under Russian control, but Vereshchuk did not say whether Moscow had accepted the corridors.

Putin’s ground forces have bogged down due to stronger-than-expected Ukrainian resistance, combined with what Western officials say are Russian tactical missteps, low morale, shortages of food, fuel and equipment for cold weather, and other problems.

In response, Russia appears to be focusing more on Donbass, the predominantly Russian-speaking region where Moscow-backed rebels have been waging a separatist war for eight years, the official said.

In another indication of the shift, Russian Defense Minister Sergei Shoigu said on Tuesday that the “liberation of Donbass” was Moscow’s main military objective.

Shoigu, whose few public appearances this month have raised questions about his health and whereabouts, told senior military officials that Russia had largely completed the first stage of its operation and was turning towards “the main goal – the liberation of Donbass”.

While this presents a possible exit strategy to save Putin’s face, it has also raised fears among Ukrainians that the Kremlin is aiming to divide the country, forcing it to cede some of its territory. Still, Zelenskyy’s comments that he was open to compromise on the region pointed to a possible avenue for negotiations.