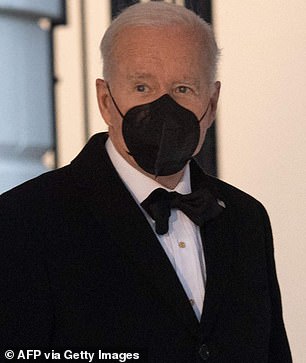 The United States convened the 15-member meeting in New York as the world watches with intensity Russian President Vladimir Putin’s aggressive military buildup on the Ukrainian border and various intelligence reports indicate an incursion is all but certain.

Meanwhile, the Biden administration is reportedly crafting “specific sanctions packages” targeting Russian oligarchs and “elites” within the Kremlin’s inner circle that would be imposed if Moscow invades Ukraine, he said. was revealed on Monday.

Speaking to reporters ahead of the meeting, Kremlin spokesman Dmitry Peskov accused the Biden administration of spreading misleading information in order to foment further tensions.

“Much to our dismay, the US media has recently released a massive amount of unverified, distorted and deliberately misleading information about what is happening in and around Ukraine,” Peskov said according to multiple media outlets.

“The hysteria promoted by Washington is causing hysteria in Ukraine, almost to the point where people are packing their bags for the front. That’s a fact. And that’s the flip side, the very harmful side of the campaign that Washington is now suing.

Monday’s meeting was contentious from the start, with Russian Ambassador Vasily Nebenzya calling for a vote on whether to proceed first.

But the effort failed, only Russia and China voted against, 10 countries voted for and Gabon, India and Kenya abstained.

Nebenzya accused the United States of trying to “raise the hysteria” and denounced “the myth of Russian aggression”.

On Tuesday, Secretary of State Antony Blinken is preparing to have a telephone conversation with Russian Foreign Minister Sergei Lavrov.

Behind the scenes, U.S. officials are reportedly reviewing “a broad list of individuals” and their families to target with tough economic sanctions if Moscow goes ahead, according to the FinancialTimes.

“Putin’s cronies will no longer be able to use their spouses or other family members as proxies to evade sanctions,” senior administration officials told the outlet.

“The individuals we have identified are in or near internal Kremlin circles and play a role in government decision-making or are minimally complicit in the destabilizing behavior of the Kremlin.”

They did not name specific individuals so as not to give notice to intended targets, but would have chosen oligarchs with a significant financial stake in the West.

“Sanctions would cut them off from the international financial system and ensure that they and their family members can no longer enjoy the benefits of parking their money in the West and attending elite Western universities,” the leaders said. Biden officials.

An administration official said CNN that they were considered “particularly vulnerable targets”.

They said the sanctions being drafted would be of a “massive” scale to “atrophy Russia’s ability to pursue its strategic ambitions”.

“The Russian elite should fear the consequences inflicted on them if Russia continues to invade,” the official said.

The Russian elites to be targeted come from “any sector of the Russian economy identified by the Treasury Secretary” and include some names from a 2018 list of powerful individuals and companies designated by the Trump administration.

The Treasury’s 2018 list includes “seven Russian oligarchs and 12 companies they own or control, 17 senior Russian government officials and a Russian state-owned arms trading company and its subsidiary, a Russian bank” designated by the Treasury under the Trump administration,” according to the Department.

An official reportedly said the sanctions are only part of the wide range of sanctions the United States is considering if Russia invades Ukraine.

President Biden said last week that he would not rule out personally sanctioning Putin, as US reports indicate an “imminent” invasion and UK intelligence signals an alleged coup plot by the Russians in Kiev, the Ukrainian capital.

Ukrainian servicemen stand next to an armored personnel carrier (APC) of the 92nd Separate Mechanized Brigade of the Ukrainian Armed Forces, parked at their base near the village of Klugino-Bashkirivka, Kharkiv region, on 31 January

Thousands of Ukrainian civilians join Territorial Forces to fight alongside 250,000 regular soldiers to defend their country

At the same time, federal lawmakers in Congress are preparing to act on their own set of sanctions.

In a show of bipartisan unity, Senate Foreign Relations Committee Chairman Bob Menendez and high-ranking member Sen. Jim Risch appeared together on CNN on Sunday to discuss a two-tiered approach to punishing Russia.

This would likely include steps to impose sanctions on actions Russia has already taken, such as a massive cyberattack on the Ukrainian government for which Kyiv claims Moscow is responsible.

They are also looking to potentially send more weapons to Ukraine on top of the lethal and defensive aid already sent.

Russia’s threatening posture towards the former Soviet state has accelerated the deterioration of relations between Moscow and Washington, now at their lowest point since the Cold War.

Monday will mark the West’s most high-profile attempt to dissuade Russia through diplomacy, as representatives of the world’s most powerful nations meet in New York.

Previous talks between Russia and the United States and their NATO allies in Europe have so far been unsuccessful.

US Ambassador to the UN Linda Thomas-Greenfield, who will be at Monday’s meeting, told ABC News in a television interview on Sunday: “We have made it clear that we are ready to address our concerns, concerns Ukrainian and Russian concerns at the diplomatic table, but that cannot be done on the battlefield.

Russian Foreign Minister Sergei Lavrov yesterday accused NATO of trying to bring Kiev into the alliance, while Russia has massed 100,000 troops on Ukraine’s borders. Moscow wants NATO to exclude Ukraine’s membership as a condition of its withdrawal.

Russian Security Council chief Nikolai Patrushev said talk of a Russian invasion was “completely ridiculous” and claimed: “We don’t want war and we don’t need it at all.”

Thousands of Ukrainian civilians join the Territorial Forces to fight alongside 250,000 regular soldiers to defend their country. NATO Secretary General Jens Stoltenberg said there were “no plans” to deploy NATO combat troops to Ukraine.

He noted that there was “a difference” between being a full member of NATO, with a mutual defense obligation between countries, and a “strong and highly valued partner” like Ukraine.

Russia’s military buildup near Ukraine has extended to include blood supplies as well as other medical materials that would allow it to treat the wounded, in another key indicator of Moscow’s military readiness, officials said. to Reuters three American officials.

Current and former US officials say concrete indicators – like blood supplies – are key to determining whether Moscow would be ready to lead an invasion, should Russian President Vladimir Putin decide to do so.

The Pentagon has previously acknowledged the deployment of “medical support” as part of Russia’s hardening. But disclosing blood supplies adds a level of detail that experts say is key to determining Russian military readiness.

“It doesn’t guarantee there will be another attack, but you won’t execute another attack unless you have it in hand,” said Ben Hodges, a retired US lieutenant general now in the research institute Center for European Policy Analysis.

US is pumping Kiev regime with weapons and instigating it into military adventures, Russian Embassy says – Russian Politics and Diplomacy