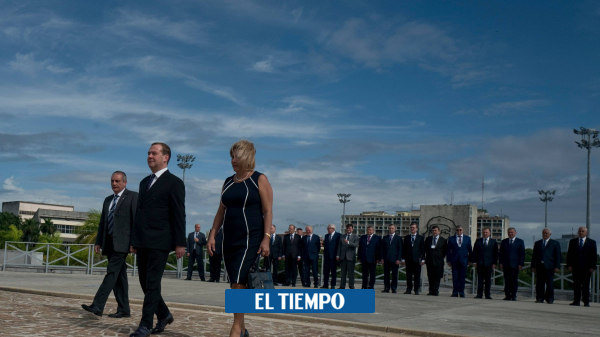 With the exception of Cuba, Venezuela and Nicaragua, Latin America has turned its back on Russia on the invasion of ukrainebut Moscow can keep an ace up its sleeve and surprise with a “symbolic” provocation in the region to challenge United States.

Lately, even as the drums of war beat in Ukraine, Russia has been on a frenzy diplomatic deployment in Latin Americaarea of ​​influence of the United States, in search of allies.

Last week, the Russian President, Vladimir Poutine, received his counterpart Brazilian, Jair Bolsonaroin Moscow, where he had previously met the Argentina, Alberto Fernandez, who even proposed to his country to be a “gateway to Latin America”.

(Due to the public interest in the events between Russia and Ukraine, all of our coverage of this invasion and related actions will be freely available to all EL TIEMPO readers)

But as soon as the tanks arrived in Ukraine on Thursday, both rejected the use of armed force, as have most countries in the region.

Michael Shifter, president of the Inter-American Dialogue think tank, isn’t surprised. “The trade relationship with Russia is very limited and the risk of aligning with it is not worth it,” he told AFP.

Putin has three allies in the region – Cuba, Venezuela and Nicaragua – who have positioned themselves by his side more than anything “for ideological and transactional interests”, he underlines. Christopher Sabatini, researcher at the Chatham House think tank.

On the very day of the start of the invasion of Ukraine, an official Russian delegation, led by the Speaker of the Lower House of Parliament, Viacheslav Volodin, arrived in Nicaragua to meet the President Daniel Ortegawho a week earlier had discussed economic and military issues with Russian Deputy Prime Minister Yuri Borisov.

Russia, which a month ago threatened military deployment in Cuba and Venezuelaseeks to strengthen “his friendships to show that he is not isolated internationally and complicate the strategic position of the United States by projecting a threat in the region”, he explains. Evan Ellis, Professor of Latin American Studies at the Institute for Strategic Studies at the US Army War College.

that he Kremlin doing “something symbolic is very likely” because he’s said it many times, Ellis says. But “a barking dog, not very biting”, nevertheless specifies the expert, who opts for “something improvised, in order to project a threat, more than substantial or well planned”.

“A certain kind of military provocation or the signing of an agreement to show its ability to project itself militarily in the region,” he explains.

The bloody military offensive in Ukraine has imposed a battery of sanctions on Russia to inflict economic damage “both immediate and long-term”, in the words of US President Joe Biden.

With an economy under sanctions severely affecting its oil exports and financial system, “Russia is unlikely to have the resources or the logistical capacity to maintain a significant military presence” in the Americas for long, Ellis said.

China on the prowl

In recent years, Latin America has become politically fragmented, which means that “relations not only with Russia, but also with Chinabe more diverse,” says Sabatini. And the new war “will put these new relations to the test”.

The United States, whose relations with Russia and China are at their lowest points, is balancing itself to strengthen ties in the region while fighting corruption in certain countries, notably in Central America, from which waves of immigrants fleeing misery and they seek a better future.

And the rise in wheat prices, which have reached records not seen since 2008, and in oil prices following the war in Ukraine will be particularly sensitive in these developing countries. Central America and the Caribbean.

“For them, the shortage will likely mean a rise in critical import prices and the risk of rising popular discontent,” Sabatini warns.

(Also: Analysis of how this tension between Russia and Ukraine was reached)

Russia will depend more economically on China, which has long-term goals in Latin America, “like replacing the United States as the main economic partner,” Shifter says.

In this war, Beijing “will maintain a fairly neutral position and examine what its rivals are doing”, he adds.

“He will closely monitor developments in this crisis to take advantage of any US weakness to expand his own influence in the region, which needs a lot of economic support.”